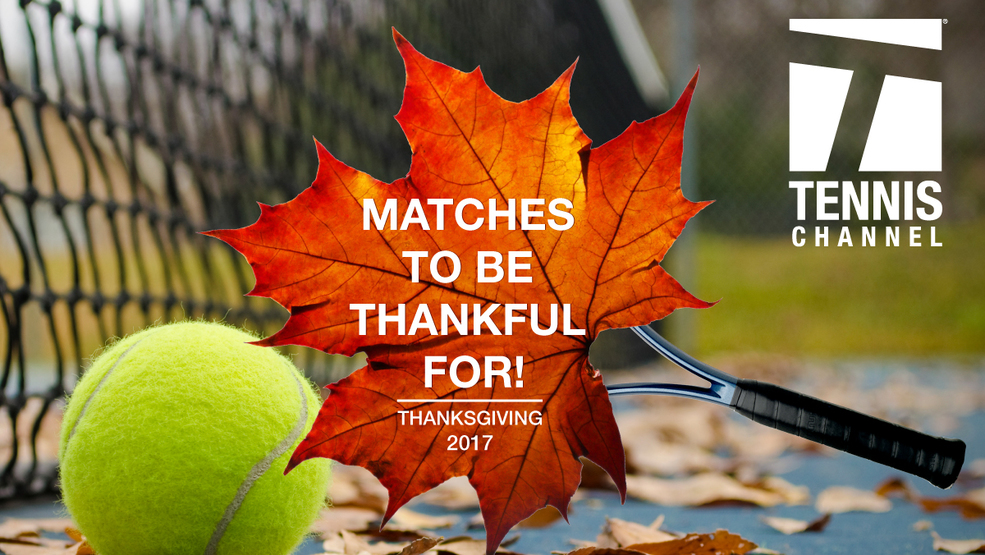 10 Matches We're Thankful for This Thanksgiving

The 2017 tennis season has come and gone, leaving most of us with a big void, and already looking forward to the 2018 season. Since today is Thanksgiving, here are 10 matches we're thankful for:

1. Roger Federer v Rafael Nadal at Australian Open. After dealing with respective injuries in 2016, these two icons entered the first Slam of the season without any high hopes, but little did we know that they would eventually emerge as the two finalists, with Federer lifting the trophy.

3. Roger Federer v Nick Kyrgios at Miami Open. We never know how the Aussie is going to perform at any given day, but in his epic semifinal match against eventual winner Federer, we saw what he was capable of despite losing 7-6, 6-7, 7-6.

4. Rafael Nadal at Roland Garros. We don't even need to pick a particular match here. The fact that Nadal won his La Decima (aka 10th Roland Garros title) is mind blowing.

5. Simona Halep v Elina Svitolina at Roland Garros. This is one of the matches Svitolina would love to forget, but chances are she won't as she choked big time to hand Halep the quarterfinal win. After being down 3-6, 1-5 and facing elimination, Halep somehow mounted a stunning comeback, emerging from the brink of defeat with a 3-6, 7-6, 6-0.

6. Petra Kvitova v Julia Boserup at Roland Garros. On paper, this shouldn't be anything to write home about, but in this case, it is as Kvitova staged an emotional comeback after suffering a knife attack last December and undergoing surgery on her playing hand. She returned to the tour earlier than expected, winning her first match 6-3, 6-2.

“This match was special to me,” said Kvitova in an emotional post-match interview. "I won for the second time, if I can say."

8. Maria Sharapova v Simona Halep at US Open. To be fair, this was a tough first round match for No. 2 seed, who faced wild card Maria Sharapova, who was playing her first Grand Slam match since returning to the sport after a 15-month doping ban. After losing the first set, Halep attempted a major comeback but ended up falling short, with Sharapova taking the match 6-4, 4-6, 6-3.

9. Sloane Stephens v Venus Williams at US Open. This was the defining match for the eventual trophy winner Stephens, who could have easily disappeared in the third after a 0-6 second set score. However, the younger American clawed her way back, taking the match 6-1, 0-6, 7-5.

10. Grigor Dimitrov v David Goffin at Nitto ATP Finals. With his monumental win, Dimitrov got rid of these nicknames: Baby Fed, and Biggest Choker. He came through big time without losing a match all week!

Bonus Match. Caroline Wozniacki v Venus Williams at WTA Finals. These two stalwarts came into the Finals with respective solid season wins, so reaching the trophy match wasn't that much of a surprise, with Wozniacki topping Williams 6-4, 6-4.