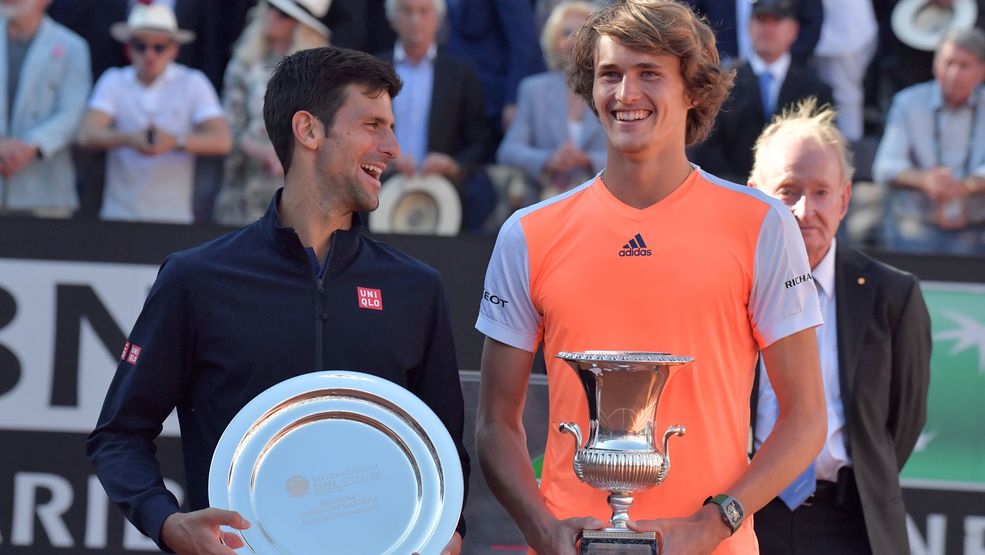 Alexander Zverev of Germany (R) poses with the trophy after winning the ATP Tennis Open final against Novak Djokovic (L) of Serbia on May 21, 2017, at the Foro Italico in Rome. / AFP PHOTO / Tiziana FABI (Photo credit should read TIZIANA FABI/AFP/Getty Images)

ROME (AP) -- Alexander Zverev claimed his first piece of the Masters 1000 pie with a convincing 6-4, 6-3 win over Novak Djokovic 6-4, 6-3 in the final of the of the Internazionali BNL d'Italia on Sunday.

The 20-year-old Zverev showed no fear as he took the racquet out of the four-time champion's hands as he dominated the match with his aggressive shots, neutralizing Djokovic's potent forehand.

"I'm very happy the way I played," said the elated Zverev after his momentous victory. "Very happy with my performance all week, actually. And especially today, I think today was one of the best matches I ever played maybe.

"You know, I knew I had to be aggressive from the first point on and to the last. It was very important for me to be able to stay this aggressive and don't let him take over the game, said Zverev.

This was Djokovic's second final of the season, having successfully defended his Doha title in January. He suffered an upset in the second round of the Australian Open by No. 117 Denis Istomin. In March, Djokovic lost to Nick Kyrgios twice-- in the quarterfinal of Mexico Open and in Indian Wells fourth round. He withdrew in Miami with an elbow injury. He lost to David Goffin in Monte Carlo quarterfinals, and to Rafael Nadal in the semis of Madrid Open.

The Serb, who recently split with his longtime coach, trainer and physio, announced during his post-match presser that confirmed that former No. 1 and eight-time Grand Slam winner Andre Agassi will be his new coach.

"I spoke to Andre the last couple weeks on the phone, and we decided to get together in Paris," said Djokovic. "So he's gonna be there. We'll see what future brings.

"We are both excited to work together and see where it takes us. We don't have any long-term commitment. It's just us trying to get to know each other in Paris a little bit," said Djokovic.