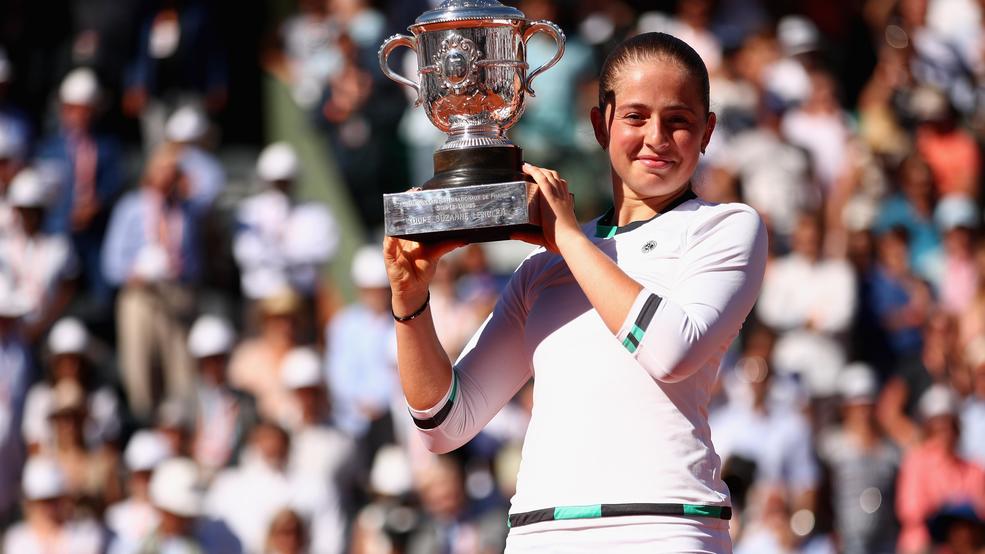 PARIS -- What a moment for Jelena Ostapenko! Newly-minted 20-year-old came into Roland Garros unseeded and left with one of the four most coveted prizes in tennis: the Roland Garros trophy.

Ranked No. 47 in the world, Ostapenko had never won a WTA career title before coming into this tournament and had never been past the third round at a major until this week. But after her semifinal win a couple of days ago, she became the first Latvian player to reach a Grand Slam final, and the first unseeded player to reach the final at Roland Garros since Mima Jausovect in 1983. WiOstapenko became First Unseeded Roland Garros Women's Champion Since 1933

With this win, Ostapenko became the first unseeded Roland Garros ladies' winner in the Open Era and since 1933. Her projected new ranking is No. 12. Had Halep won the match, she would have taken over the No. 1 WTA world rankings.

Ostapenko came firing in the opening set, taking an early lead. However, the calm Halep grounded the youngster with her deep penetrating groundstrokes and eventually wrapping up the set 6-4.

In the second set, Halep quickly got up to 3-0, poise to run away with it. but Ostapenko didn't get that memo as she soon leveled the set, scoring herself another break to level the match. In the third, was down 1-3 but hurried back to clinch her the biggest win of her very young career.

Halep, who won Madrid and was runner up in Rome where she lost to Elina Svitolina, came into the tournament as the outside favorite since there were no clear favorites. She cruised up until she encountered Svitolina in the semis. The Ukrainian was up a set and 5-1 but somehow Halep pulled something out of a hat as she made an unbelievably comeback, rallying to take the match. This set her up as the clear favorite to win the trophy match.

"I think it was a good tournament. To play final, it's an amazing thing," said Halep during the trophy presentation.

"She played really well, all the credit. She was hitting very strong. At some point I was like a spectator on court. She deserved to win. Yeah, it's tough. It's a tough moment for me, but it's gonna go away, I hope, with the time.

"I will keep working, because I really want to repeat what I have done this tournament. We will see what is gonna be," said Halep.

Ostapenko has now fulfilled her wish to be a champion like her idol 23-time Grand Slam Serena Williams, who took time off tennis due to pregnancy.

"Yeah, Serena was always, like, kind of my idol, because I really enjoyed watching her," said the newly-minted Roland Garros champion. "And she's like a great champion. I think she's playing probably similar to my style, so she was my idol, yeah."