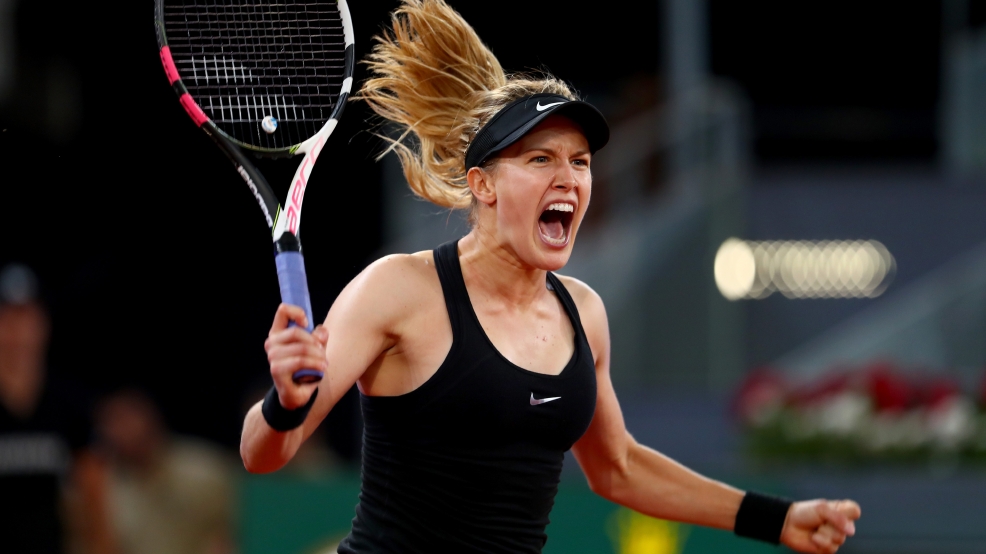 MADRID, SPAIN - MAY 08: Eugenie Bouchard of Canada celebrates match point in her match against Maria Sharapova of Russia on day three of the Mutua Madrid Open tennis at La Caja Magica on May 8, 2017 in Madrid, Spain. (Photo by Clive Rose/Getty Images)

After 'Cheater' Comments, Bouchard Delivers Win over Sharapova in Madrid

MADRID, Spain -- In a match billed as the grudge match after she called Maria Sharapova a "cheater" and that she should have been banned for doping, Eugenie Bouchard came back from a late start in the opening set to take the match 7-5, 2-6, 6-4 in the second round of the Madrid Open.

This was Sharapova's second tournament after serving a 15-month suspension for testing positive for the banned heart drug meldonium last year,

In one of the most anticipated matches of the season, the players did not disappoint as the match turned into one of the best matches of the season. In the opening match, 30-year-old Sharapova jumped to an early lead going up 4-2, but Bouchard retrieved the break back to level the set 4-4. At 5-4 serving for the set, the 23-year-old Canadian failed to close it out and letting the Russian back in the set. Eventually, Bouchard closed it out to take the set 7-5.

In the second set, it was all Sharapova, taking the set 6-2. In the third set, both players traded breaks numerous times but it was Bouchard who finally consolidated, sending Sharapova home.

This was a high-level match which saw both players letting their racquets talk.

"It definitely helps when you can back it up," said Bouchard with a smile, referring to the comments she made about Sharapova. "Obviously, there was a lot going on besides tennis in this match, as well. As soon as I stepped on the court, I really just wanted to make it about tennis. We both did that. We just battled our hearts out, I think.

Bouchard said she still believed Sharapova should have been banned.

"I still have the same opinion as I had when I got asked that question before, so," said Bouchard.

The 23-year-old suggested that come players in the locker room agree with her comments but are not comfortable speaking out.

"It's just some girls in the locker room are coming up to me and really wishing me good luck before matches, which doesn't normally happen to me. Players I don't normally speak to is more what I said.

"It showed me that most people have my opinion, and they were just maybe scared to speak out. But privately, you know, I've gotten a lot of support, so... I was inspired and motivated to play," said Bouchard.

This was the Canadian's first win over Sharapova after five tries. Up next for Sharapova is Rome, where she accepted the last of her three wild cards.