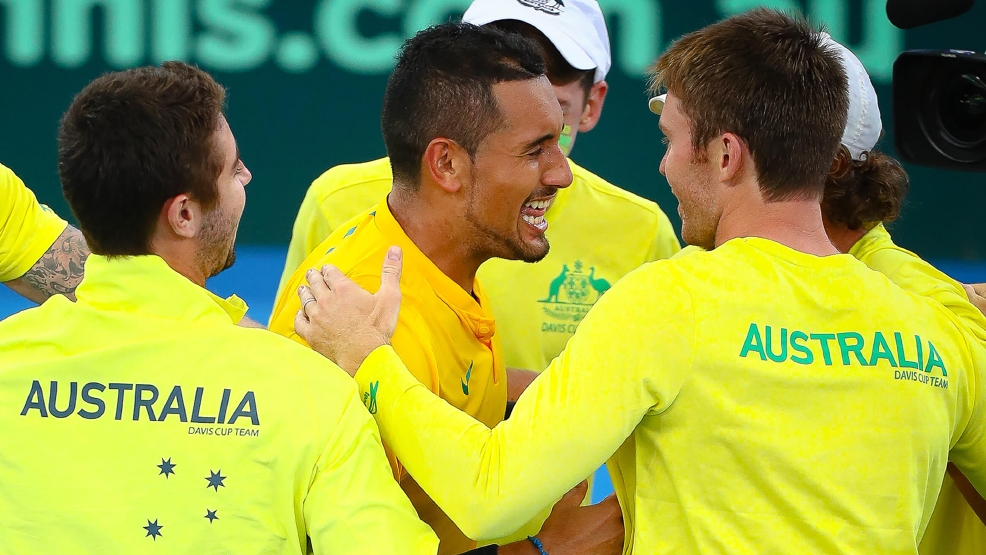 Australia's team members hug Nick Kyrgios (C) as they celebrate Australia's victory over the US after Kyrgios' match against Sam Querrey in the world group quarter-final Davis Cup clash between Australia and the USA in Brisbane on April 9, 2017. / AFP PHOTO / Patrick HAMILTON / IMAGE RESTRICTED TO EDITORIAL USE - STRICTLY NO COMMERCIAL USE (Photo credit should read PATRICK HAMILTON/AFP/Getty Images)

BRISBANE, Australia -- Australia clinched a spot in the semifinals of Davis Cup with a win over United States, thanks to Nick Kyrgios's brilliant buttoned-up game in the reverse singles rubber.

Trailing 1-4 in the first set against Sam Querrey, the 21-year-old patiently found his rhythm, sending the match to a tiebreak. Querrey got the first lead in the breaker but Kyrgios quickly erased it, taking the set 7-6(4).

In the second set, Kyrgios got an early lead and easily took the set 6-3. The beginning of the third was similar to the first one as Kyrgios trailed 1-4 after being broken early. The Aussie won the next five games, notching the tie the tie with a 7-6(4), 6-3, 6-4 win.

An elated Kyrgios raised his fists as captain Lleyton Hewitt jumped on him in jubilation.

"It was a tough third set there, I was down a break and obviously a lot of emotions," said an emotional Kyrgios. "I was close to the finish line."

Hewitt, who played many ties for Australia, was beyond himself with joy.

""There is no greater honor than wearing the green and gold and coming out here and representing your country," said Hewitt. "I couldn't be prouder of my boys. They've put so much hard work and effort into this whole year and this campaign and they deserve this.

"They come straight back from the tournaments and do absolutely everything we ask of them as the coaching staff," Hewitt concluded

Australia will play Belgium in the semifinals. Belgium, the 2015 finalist, eliminated Italy 3-2.