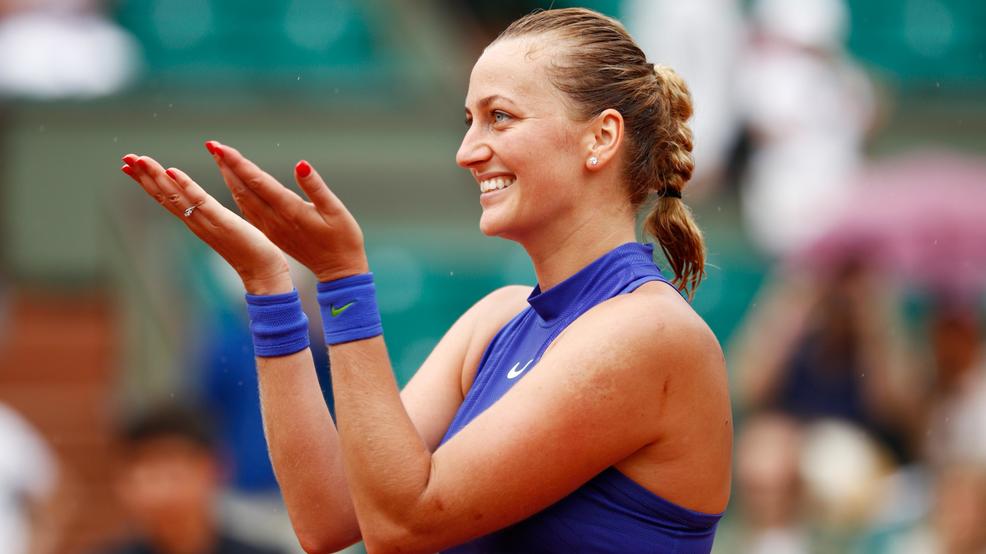 PARIS -- Day one of Roland Garros did not disappoint as two top women gave us two different, yet intriguing storylines. The story started with two-time Wimbledon champion Petra Kvitova, who made an unexpected but welcome return to tennis since suffering a knife attack during a botched home invasion in December of 2017. The other big storyline which, some (maybe many) might say they saw it coming, was provided by top seed Angelique Kerber, who suffered a HISTORIC exit in the hands of tricky and fellow lefty Ekaterina Makarova.

Kvitova, whose doctors initially thought it would take much longer for her to return, made a winning return today with a convincing straight sets 6-3, 6-2. Because of how wild open the WTA draw is here in Roland Garros, Kvitova has now emerged as one of the top contenders. The way she performed in her first match today, peppering winners like nobody's business, it's hard to argue with the possibility of her making a deep run in Paris.

The Czech, whose prognosis was not optimistic as she had to undergo surgery on her left hand (she's a lefty), was very emotional after her win.

"It was nice and really heartwarming welcome in the Chatrier. My team was there," said Kvitova referring to her player box, who wore black T-shirts with letters that read: 'Courage. Belief. Pojd.' My family was there. Everyone who helped me through the difficult time. So it was a real pleasure to play in front of them and play how I played. I think I played well after six months off. I'm happy with the game, of course, but I mean, it wasn't really about the game today," said Kvitova.

23-year-old Dominic Thiem, one of the hottest players of 2017, started his campaign in winning ways with an easy straight sets 6-4, 6-0, 6-2 victory over Bernard Tomic. Thiem is one of the top guys who will give Rafael Nadal a run for his money here in the French capital as he reached the Barcelona Open final (lost Nadal), Madrid Open final (lost to Nadal), and took out Nadal in Rome quarterfinals on his way to the semis, where he lost to Novak Djokovic.

After his loss, Tomic said "no one wants to get in rallies with Dominic Thiem on clay." He had a good point considering how good Thiem is on the red dirt.

"It's good to hear this from such a good player like him, you know," Thiem responded to the compliment. "Of course if I play my aggressive game style, I guess it's tough to be in the rally with me, and, I mean, also he's not home on clay, so of course he tried to shorten the points and to play fast, to break the rhythm. That's what he tried, and he's not home on clay, so he's not probably ready to go the rallies.

36-year-old Venus Williams, a 2002 finalist, advanced to the second round after defeating qualifier Qiang Wang 6-4, 7-6(3). The American trailed in both sets but was able to prevail. With this match, Williams made an Open Era record of 20 appearances at Roland Garros (Conchita Martínez made 18 appearances).

"Definitely I think spacing out how long, how many tournaments I have played, I believe that's helped me," said Williams talking about her longevity as a top player. "I didn't play the junior tour, so that's -- there is even more years of touring. It's not easy emotionally or mentally or physically to do this job, so I think that helps. I haven't had any other experience.

"So would I recommend it? For sure, but I think if you're happy playing a lot of tournaments and you can handle that, then it's not a problem. But if you're not, then you have to space it out," said Williams.

Kerber, who is having a major underwhelming season, was stunned by unseeded Makarova in straight sets 6-6, 6-2. With this loss, Kerber became the first WTA No. 1 seed to lose in the first round of Roland Garros.

"Right now I think that I have to find to myself again and just trying to forget the clay court season as soon as possible and then reset and starting from the grass courts again," said Kerber dejectedly.