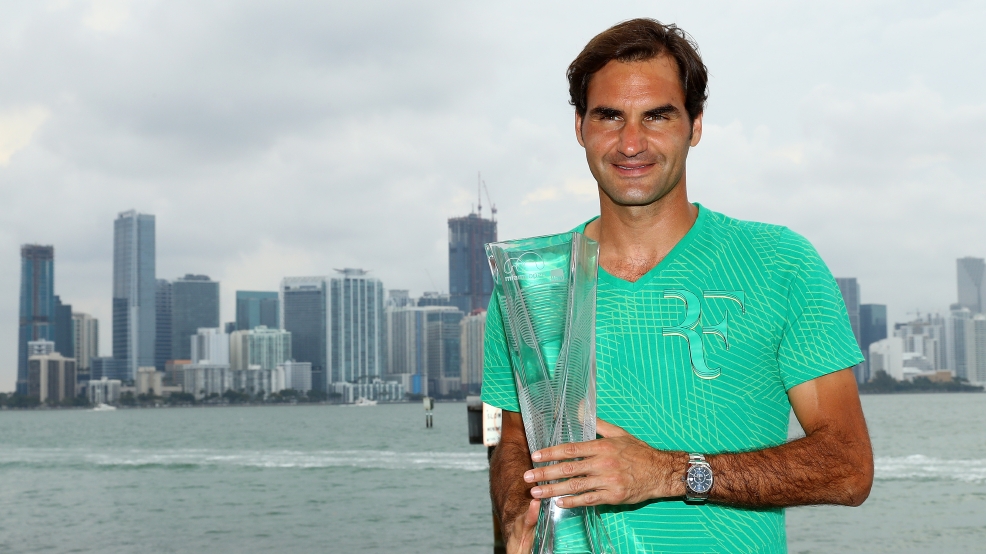 KEY BISCAYNE, FL - APRIL 02: Roger Federer of Switzerland poses in front of the Miami Skyline after defeating Rafael Nadal of Spain during the Men's Final and day 14 of the Miami Open at Crandon Park Tennis Center on April 2, 2017 in Key Biscayne, Florida. (Photo by Al Bello/Getty Images)

KEY BISCAYNE, Fla. -- For the third time this season, Roger Federer triumphed over Rafael Nadal in the final of the Miami Open, wrapping up his third 'Sunshine Double' on Sunday.

There were no breaks of serve in the first seven games as both players refused to surrender. Nadal, who had managed to dig himself out of trouble in his previous service games, found himself in the same situation in the eight game. This time however, it caught up with him in the eighth game where he netted, giving Federer the break and 5-3 lead. Federer then consolidated, closing out the set 6-3.

In the seventh game of the second set, Federer found himself with a breakpoint when Nadal hit a long forehand but the Spaniard was able to dodge the bullet, closing the game with a fist pump.

This tough hold seemed to energize Nadal as he was able to win his first point on Federer's serve for the first time in the second set. However, Federer held at 30 to even the set 4-4.

In the ninth game, Nadal blinked, bringing up a breakpoint for Federer, which he so gladly converted. He soon served out the match, taking it 6-3, 6-4.

The Spaniard will now go back to the drawing board to try to figure out how he can turn the rivalry around now that he's lost to the Swiss four times in a row.

"He's playing good and with high confidence," Nadal reflected on Federer's game. "When a top player like him is playing with this high confidence and playing that good then it's tough to win.

"Today was a close match in my opinion. Was 6-3, 6-4, but I had opportunities to have the break before him on the first set. I don't believe in luck, but I was not very lucky in the first set in a couple of points that I think I played well and I lost in the break points, and that's it.

"Then he has the break and you are in trouble," said Nadal.

Federer agreed with Nadal's statement that it was a close match despite the deceiving scoreline.

"Yeah, look, I think it was a close match. Maybe if you didn't see the match and you were sitting somewhere around the world and you see the score you're like, Okay, sort of maybe just straightforward and couple breaks and that was it.

"That's not the full story. I thought he had his chances in the first and in the second. It was close. I think on the big points today I was just a little bit better. Why, I have no explanation. I just think it fell that way today.

"It was more of a fight mode I was in today just trying to stay afloat. Physically, emotionally it's been a draining week, so I did I did very well," concluded Federer.

Nadal still leads their head-to-head 23-14 but Federer is quickly erasing the deficit. But now that the tour is headed to the European clay court swing, Nadal will likely turn the tide unless Federer decides to skip the clay court events as he has hinted in his earlier interviews this year.