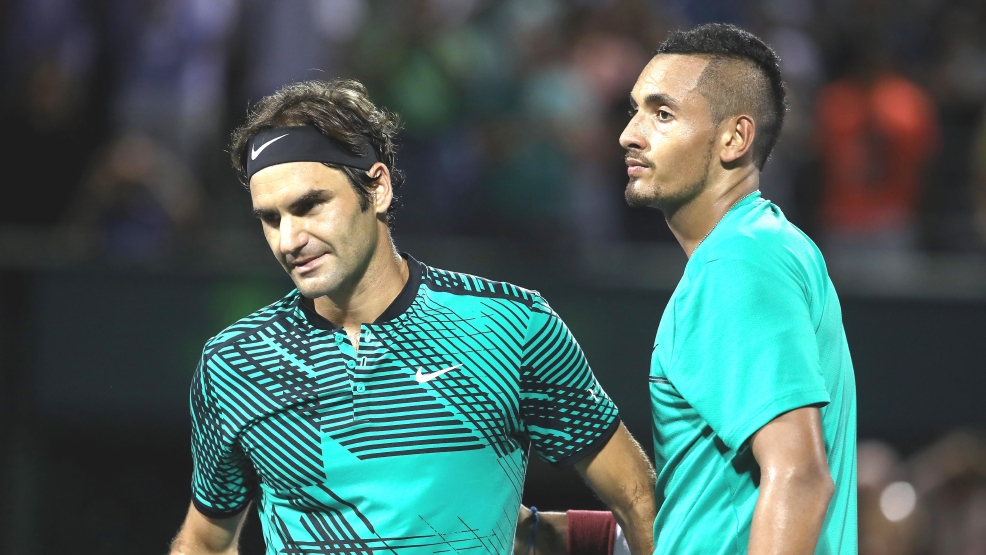 KEY BISCAYNE, FL - MARCH 31: Roger Federer of Switzerland is congratulated by Nick Kyrgios of Australia after his three sets win in the semi finals at Crandon Park Tennis Center on March 31, 2017 in Key Biscayne, Florida. (Photo by Julian Finney/Getty Images)

Kyrgios drew first blood in the seventh game earning himself a break. He consolidated the break to go up 5-3. Federer won the next three games, denying Kyrgios from serving for the set. At 9-9 in the tiebreak, The Aussie double-faulted in the next point, handing Federer a set point, which the Swiss consolidated to wrap up the first set 7-6(9).

There were no breaks of serve in the second set as both players protected their serves and it was becoming clear we were headed to another tiebreak. This time is was the 21-year-old who closed out the set 7-6(9).

The third set mirrored the second one as both players refused to surrender, sending the final set to yet another tiebreak. They both held their points under pressure but Kyrgios blinked first, giving Federer the opportunity to shut it down with a 7-6(9), 6-7(9), 7-6(5) win.

Despite going home empty handed, Kyrgios should be proud of his performance today as he gave two-time champion a run for his money.

"I showed a lot of fight," the 21-year-old reflected. "I thought I competed for every point.

Federer had nothing but good words to say about the rising star.

"Yeah, I mean, look, I think people are really getting to know him now," said Federer about Kyrgios. "They see him play more often. It's his second, third year on tour now, so he's coming back for the second, third year now to tournaments, which is good. You really see how he's evolving as a player and person."

The 35-year-old will meet 30-year-old Nadal, who defeated Fabio Fognini earlier on Friday. This will be Federer and Nadal's third encounter this year. They met in the final of the Australian Open where Federer won in five sets, and in the fourth round of the BNP Paribas Open that Federer won easily on his way to the title win.