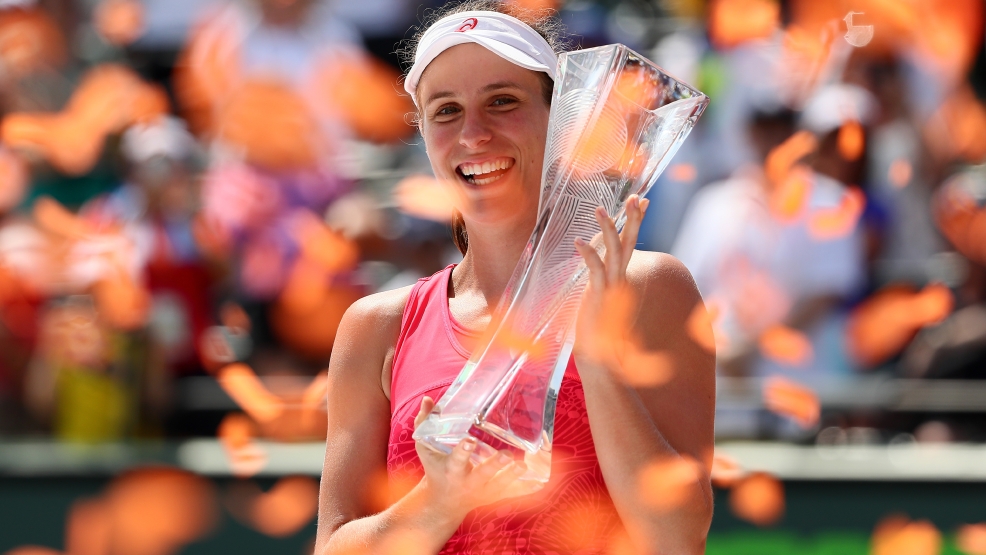 KEY BISCAYNE, Fla. (AP) -- Johanna Konta won her first Premier Mandatory title with a decisive win over Caroline Wozniacki in the final of the Miami Open on Saturday.

The 25-year-old Brit was made to wait for the instant replay to confirm that indeed her lob was a winner, which gave her the match 6-4, 6-3.

The players traded breaks early in the first set but at 4-4, Konta broke again to take the set 6-4.

Early in the second set, Wozniacki took a medical timeout to re-tape her ankle. At 3-3, Wozniaki blinked, giving Konta the break. The Brit ran away with the set, closing out the match 6-4, 6-3.

"You know, I tried my best," declared Wozniacki after the defeat. "I tried to fight. She played really aggressively. She played well.

"You know, I kind of gave the game away at 4-All in the first set, and then missed a couple break points at 4-5. Those are the ones that you need to take if you want to win a match like this."

After the match, Konta was still trying to digest her biggest win of her career.

"It's all kind of sinking in, I guess," said an elated Konta. "Right now it's quite busy doing everything, so a little bit going through the motions. I think it'll mostly sink in once I get back to the hotel and have some time with my team and have some good food."

Konta, who had a breakthrough at the 2016 Australian Open where she reached the semifinals before losing to eventual winner Angelique Kerber, is what you would consider a later bloomer. At 25, she only won three tournaments, considering her big game.

"I think it was probably a combination of everything, but also a question of maturity," Konta reflected on her journey. "I needed to go through certain life experiences, not just on court, off court as well, to I think make me into the competitor that I am, and also the person off court," she concluded.

Given the way she's been playing this week, it shouldn't be a surprise that she hopes to be a Grand Slam winner soon. She does have the goods to go all the way, and this Miami win should give her confidence going into the clay court and grass swings.

"I just want to work and try to really bring out in myself the most that I have. Wherever that gets me that's where it will get me, but hopefully the day I hang up my racquets I will be able to say that I really maximized my full ability and everything inside me."

This is Konta's second title of the season, after claiming Sydney in January. She becomes the first British woman to win the Miami Open.