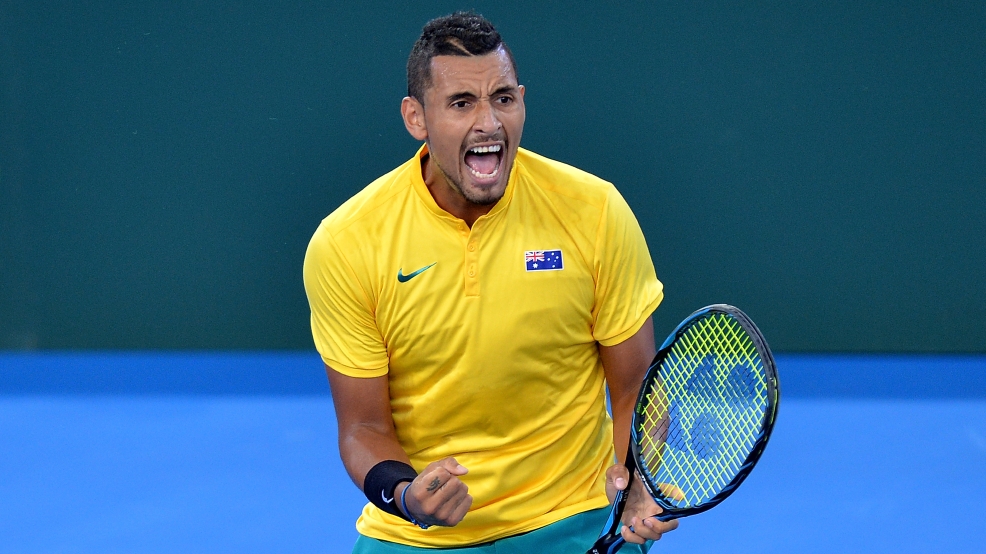 BRISBANE, AUSTRALIA - APRIL 07: Nick Kyrgios of Australia celebrates winning a point in his match against John Isner of the USA during the Davis Cup World Group Quarterfinals between Australia and the USA at Pat Rafter Arena on April 7, 2017 in Brisbane, Australia. (Photo by Bradley Kanaris/Getty Images)

BRISBANE, Australia --Jordan Thompson gave Australia its 1-0 lead after he stunned No. 15 ranked Jack Sock in the first rubber of the U.S. v Australia Davis Cup quarterfinal tie at the Pat Rafter Arena in Brisbane on Friday.

"I just tried to wear him down, and I thought I was fit enough to do that," said an elated Thompson after his remarkable win. "I was not trying to go too big, that's not within my game."

In the second rubber, in-form Kyrgios took out American John Isner in a straight sets thriller 7-5 7-6(5) 6(5). In the first set, Isner broke first but Kyrgios got the break back. In the 11th game, Kyrgios strike again, and consolidated the break to close out the first set.

There were no breaks of serve in the second set as Isner saved three break points. The set was sent to the the tiebreak where Kyrgios took seven points to go up 2 sets.

The third set was similar to the second, with Isner saving five break points. The 21-year-old Aussie wrapped up the match with his 20th ace.

"I felt like I played well enough to beat anyone out there, but not Nick," said the dejected Isner. "He came up clutch."

With its 2-0 lead, Australia is hoping to wrap up the tie on Saturday.

"Hopefully we can close it out tomorrow, it's been an unbelievable day," said Kyrgios.

On Saturday Sam Groth and John Peers will aim to clinch the tie against Sam Querrey and Steve Johnson, but U.S. will aim to send the tie to the reverse singles on Sunday.