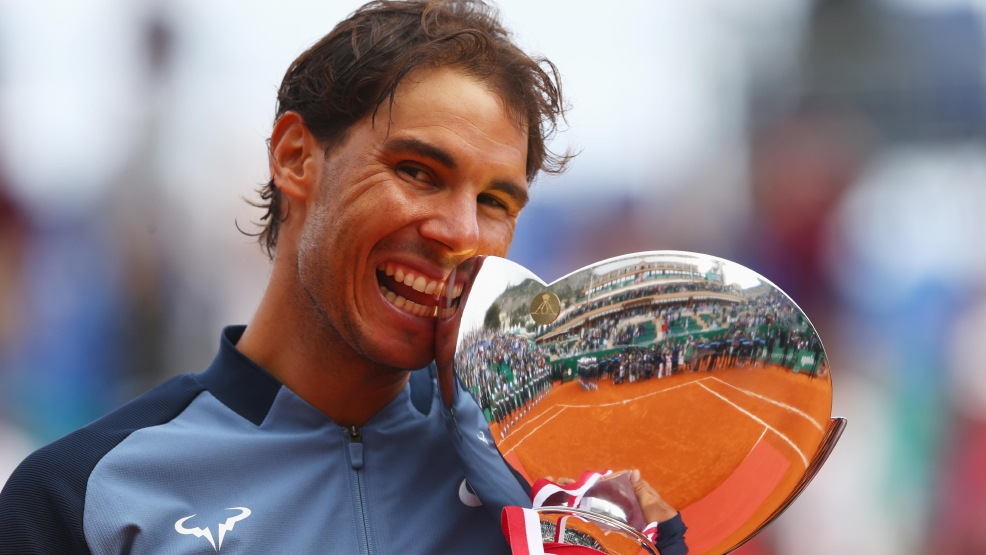 MONTE-CARLO, MONACO - APRIL 17: Rafael Nadal of Spain celebrates with the trophy after victory in the singles final match against Gael Monfils of France during day eight of the Monte Carlo Rolex Masters at Monte-Carlo Sporting Club on April 17, 2016 in Monte-Carlo, Monaco. (Photo by Michael Steele/Getty Images)

MONTE CARLO, Monaco -- This week we'll see the return of No. 1 and 2 seeds Andy Murray and Novak Djokovic (respectively) as the ATP World Tour continues in Monte Carlo on the Road to Roland Garros. Both Murray and Djokovic have been rehabbing their respective elbow injuries, and will be interesting to see how they perform. Defending champ Rafael Nadal will endeavor to win his 10th Monte Carlo trophy, an unprecedented feat. Unlike the aforementioned top seeds, Nadal is in great form having made the finals of Australian Open (lost to resurgent Roger Federer, Acapulco (lost to Querrey) and Miami (lost to Federer again).

Murray gave us a glimpse of his form last week in the Match for Africa 3 exhibition match against Roger Federer. This was Murray's return to the court since losing in his opening match at the BNP Paribas Open in Indian Wells and subsequently withdrawing from Miami Open with elbow injury. He admitted after the exhibition match that his elbow is not one hundred percent healed.

"I'm not serving as fast as I would like yet, but am hoping over the next five or six days I will be able to start serving like normal again,” he confessed.

He opens his campaign against the winner of Gilles Muller or Tommy Robredo, who took out Grigor Dimitrov in the second round of the Grand Prix Hassan II in Morocco on Thursday. If he passes the test, Murray will potentially play 2015 finalist Tomas Berdych or Marin Cilic in the quarterfinals.

2014 champ Wawrinka hasn't had a great start of 2017 and will be hoping to turn his luck around in Monte Carlo. He knows how to play on the dirt having won Roland Garros in 2015. He will play the winner of Mischa Zverev, who upset Murray in the fourth round of the Australian Open, and Jiri Vesely. Waiting for the Swiss in the quarterfinals will likely be two-time semifinalist Jo-Wilfried Tsonga or No. 11 seed Lucas Pouille. Wawrinka leads 5-3 in his head-to-head against Tsonga. If he plays Pouille, it will be their first meeting.

Djokovic will give his elbow a test run in Monte Carlo after pulling out of the Miami Open with elbow injury (he won his Davis Cup match against Spain over a week ago). He will likely have his hands full in his opening match if he plays durable Gilles Simon. If the 2013 and 2015 champ goes through, he will potentially battle Dominic Thiem, who thrives on red clay, or David Goffin for the semifinal spot.

Defending champ Nadal will kick off his favorite part of the tennis season against the winner of the all-Brits match, Daniel Evans or Kyle Edmund. Potential danger in the form of 19-year-old Alexander Zverev will likely be waiting for him in the third round. It's worth pointing out that Nadal's 2-0 head-to-head advantage against the rising teen star is misleading considering both matches were sent to the decider. Should the Spaniard pass the potential Zverev test, Grigor Dimitrov might be waiting for him in the quarterfinals, ready to avenge the Australian Open five-setter loss.