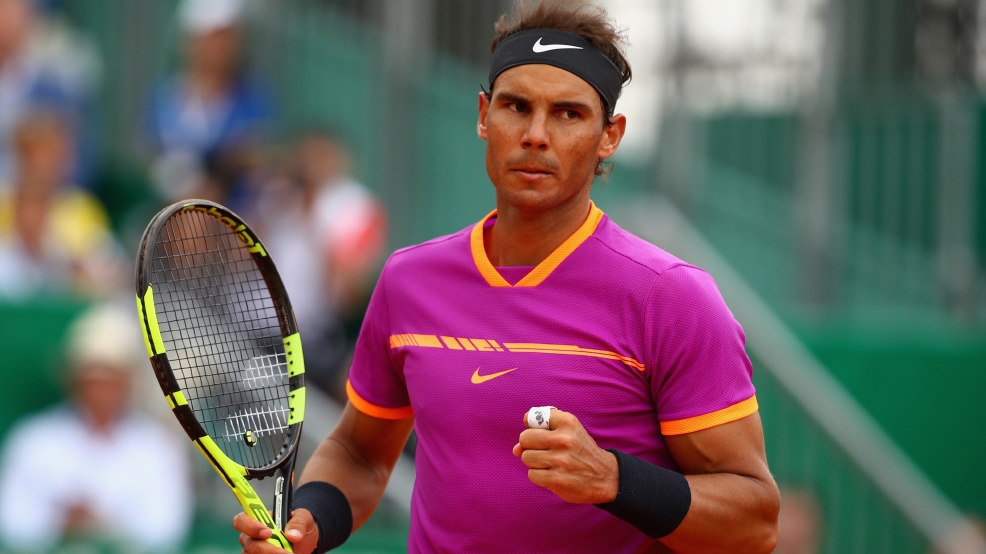 MONTE-CARLO, MONACO - APRIL 19: Rafael Nadal of Spain celebrates a point against Kyle Edmund of Great Britain in his second round match on day four of the Monte Carlo Rolex Masters at Monte-Carlo Sporting Club on April 19, 2017 in Monte-Carlo, Monaco. (Photo by Clive Brunskill/Getty Images)

MONACO -- On his 20th birthday, Alexander Zverev was taken to 'clay court' school by defending champ Rafael Nadal in the third round of Monte Carlo Masters.

Nadal only needed 69 minutes to get past rising star Zverev in a 6-1, 6-1 comprehensive win, a far cry from Nadal's tough second round win against Kyle Edmund on Wednesday.

The nine-time champ was at this clay-court best, losing only 9 service points in the entire match. Unlike their previous two matches where Zverev pushed him to the ultimate limit, the Spaniard took control of the match from the jump and never let go.

Nadal is three matches away from the unprecedented 10th Monte Carlo Masters title and his 50th clay court title. He awaits the winner of Diego Schwartzman and qualifier Jan-Lennard Struff.

Earlier on Thursday top seed Andy Murray was sent packing by Albert Ramos-Vinolas 2-6, 6-2, 7-5 despite a 4-0 lead in the third set.

"I'm disappointed to lose from the position that I was in," said Murray. "I haven't lost many matches like that in my career.

"He started playing better toward the end of the set. I should have been able to do enough to sort of weather that storm a little bit and finish the match off."

2014 champion Stan Wawrinka was also eliminated on Wednesday as he lost to Pablo Cuevas of Uruguay 6-4, 6-4 in the third round.

"If you hesitate a little, he will get you," Wawrinka said. "When you're not at your top level, he knows what to do."