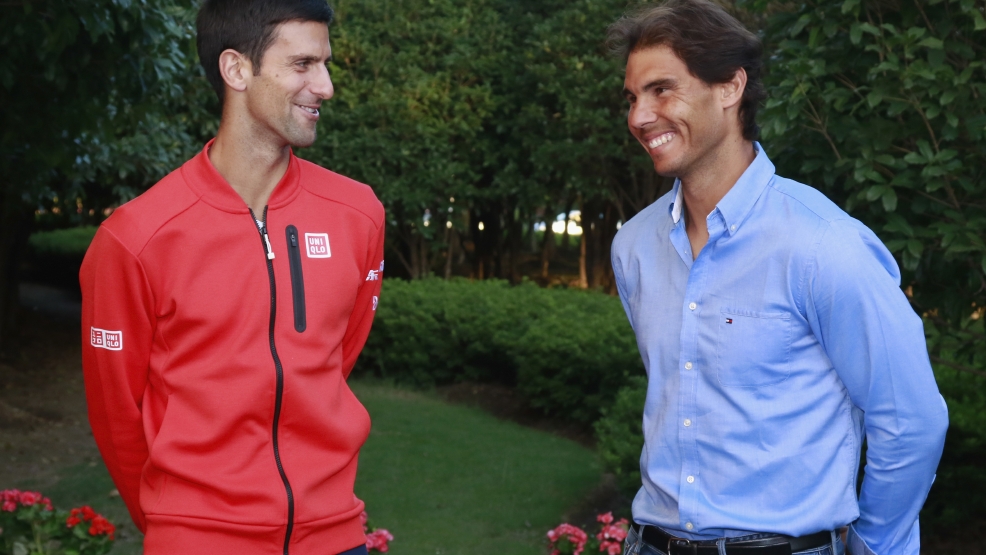 Watch Nadal take on Djokovic LIVE on Tennis Channel tomorrow at 10 AM ET.

MADRID, Spain -- Rafael Nadal fended off David Goffin in straight sets in the quarterfinals of Mutual Madrid Open on Friday.

It was high level tennis in the first set as both players held their serves, with Nadal holding comfortably. However, it was Goffin who blinked first in the tiebreak, allowing Nadal to steamroll.

At 1-1 in the second, Nadal scored the first break of the match. Up 4-2, the Spaniard scored another break, and successfully consolidated it, setting up a blockbuster semifinal clash with long-time rival Novak Djokovic, who had a walkover after Kei Nishikori withdrew with wrist injury.

"I don't want to go too hard on my wrist," said the disappointed Nishikori. "I want to get back to 100 percent. I want to fight again in every match."

Nishikori will take a couple of days off and try to heal the injury and then hopefully play Rome.

"I will plan to play Rome, but we'll see," said Nishikori. "I cannot promise to play or pull out right now. But the French is more important. We'll see in the next couple of days."

Djokovic and Nadal have played 49 times, with the Serbian star leading their overall head-to-head 26-23. However, Nadal leads their clay court head-to-head 14-7.

"It's going to be a very tough match against one of the best players in tennis history," said Nadal, previewing his next match against Djokovic. "I know that to be able to have chances, I have to give 100%. Well, I think that I've been playing at a high level during many weeks. I know tomorrow is going to be a day that either I play really well or I'm not going to have many chances.

"I think I've done my homework. Tomorrow is a day to try to give my best. Hopefully I'll be ready for that," said the Spaniard.

Nadal is grateful to have this long rivalry with Djokovic and also the one with his good friend Roger Federer, who opted to skip the clay court season (he's entered into Roland Garros).

"At the end it has made me better," said Nadal. "When you play people that are so good, well, it always makes you give 100%. I think we have harmed each other during our careers. We have taken one from the other titles. I have taken titles from him and he has taken titles from me.

"The reality is that it's been a really good era because the matches between Djokovic, Federer and me, me and Federer, and Federer and Djokovic, I think I've already said the three of them, I got a little bit lost, we have repeated a lot of times these games," Nadal said.

Nadal is going for his 52nd clay court title and his third in 2017. This was his 13th straight win.

This will be Djokovic first semifinal since winning in Doha in January. He reached the quarterfinals of Monte Carlo last month, where he lost to David Goffin.

Watch Nadal take on Djokovic LIVE on Tennis Channel tomorrow at 10 AM ET.