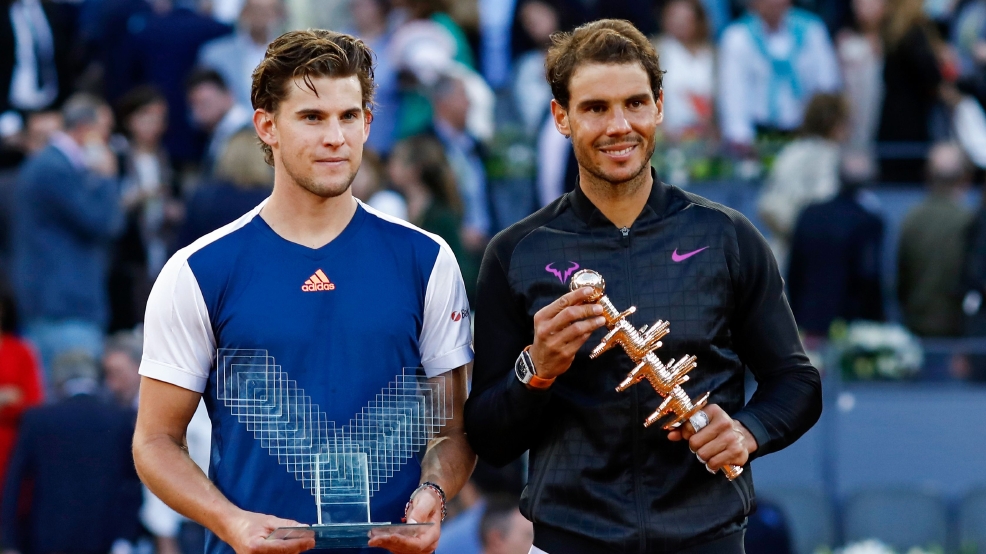 MADRID, Spain -- Rafael Nadal took out Dominic Thiem in the final of Mutua Madrid Open on Sunday to claim his fifth tournament title.

Trailing early in the opener, Nadal quickly closed the gap, pushing the set to a tie break, where he was able to still a point and wrap up the set.

In the second set, the No. 4 seed made his move early, and that was enough to earn him his fifth tournament title.

Nadal, who's had a grueling schedule this past month, will head to Rome this week for the Internazionali BNL d’Italia.

"I think what is logical is to go to Rome, try to give 100%," said Nadal after his win. "After that, I think I have a few days to rest. I mean, it's difficult to think about all these things right now.

"I just finished a great match. I've been talking with my team, with some people that are here to see me. The only thing I care about today was to win this trophy. I was really happy about it. I really wanted to go for it. Tomorrow I'll think about something else. Today I'm not going to think about that.

"Today I'm very happy for what I achieved. I think to win three different trophies in a row on clay. They are all important championships. Tomorrow we'll think about what happens in Rome. I'll think about Rome," said the Spaniard.

Nadal extended his winning streak to 15 matches. He now owns 52nd clay court titles and 72 career titles. No doubt he's now the clear favorite to win Roland Garros, which will be his 10th.

This was Thiem's second straight loss to Nadal in a final -- he lost to Nadal is Barcelona final a week ago.

"Of course, it were unbelievable two weeks in Spain: Barcelona and Madrid," reflected Thiem on his incredible run in Spain these past few weeks. "I'm going to enjoy the next hours, then I'll think about Rome. It's, again, a big and important tournament.

"Now that I did it once, play really well in such a big tournament, next step is to maintain this level to the next week. That's what I will try, said Thiem.