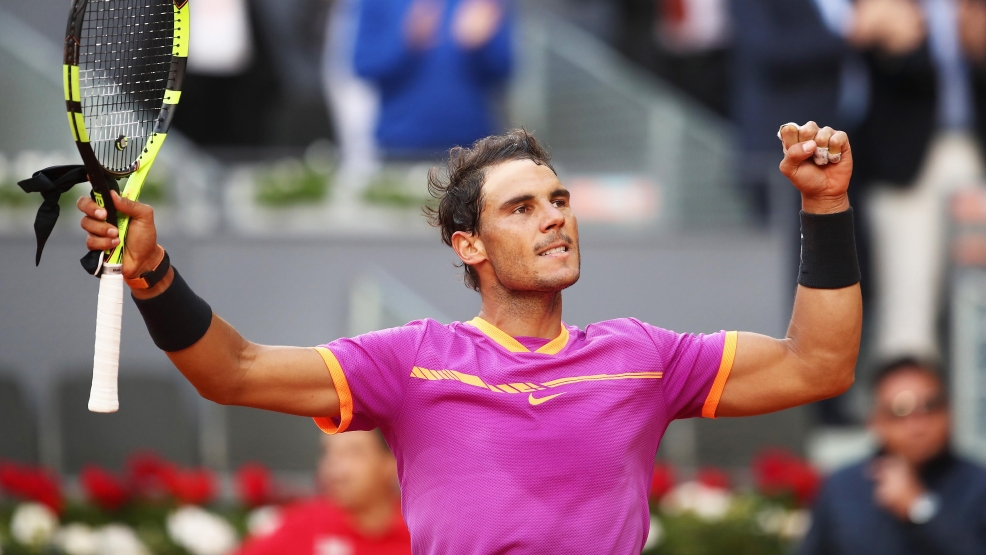 MADRID, SPAIN - MAY 10: Rafael Nadal of Spain celebrates defeating Fabio Fognini of Italy during day five of the Mutua Madrid Open tennis at La Caja Magica on May 10, 2017 in Madrid, Spain. (Photo by Julian Finney/Getty Images)

MADRID, Spain -- After so much hype, the Rafael Nadal v Nick Kyrgios third round match was anticlimactic as Nadal steamrolled Kyrgios in the third round of the Mutual Madrid Open on Thursday.

The beginning of the opener was competitive as both players held their ground. Nadal pounced in the fourth game to break first but Kyrgios wasn't happy about it as he broke right back. Nadal refused to be bothered by that move as he broke right back again. He then consolidated the break to go up 5-2, and eventually closed out the set 6-3.

The second set was all Nadal as he only surrendered one game.

"I think I played really well tonight," reflected Nadal after the match. "Since the beginning of the match, I committed just a few errors. I think I returned the ball very well, even better than normally.

"I think I served very well, committed very few errors. I think I made a step forward compared to yesterday. Of course, to be able to win 6-3, 6-1, whatever the second was, I can't remember, I think it's great news. I think it's not normal to win against an opponent like this because Nick is a really good opponent," said Nadal.

Nadal, who has won this title four times, will play David Goffin for the spot in the semifinals. This should be an interesting match considering what happened when they last match about three weeks ago in semifinals of Monte Carlo, where Nadal's win was overshadowed by the now infamous controversial call.

In the sixth game of that Monte Carlo opening set, Goffin was serving up a break 3-2 and one point away from 4-2 when chair umpire Cedric Mourier overruled the linesman’s call on Nadal’s forehand shot that went wide, which in turn rattled Goffin. Video replay showed Nadal's shot was out, but Goffin couldn't challenge the call because clay court tournaments don't use the now popular Hawk-Eye since the mark is easy to see on clay.

"The level was definitely very high today I thought from both players," said Djokovic. "I think Feliciano played really well, especially in the second set. I wasn't winning too many points on his service games until the last one where I managed to return many balls back in play and then win the match."