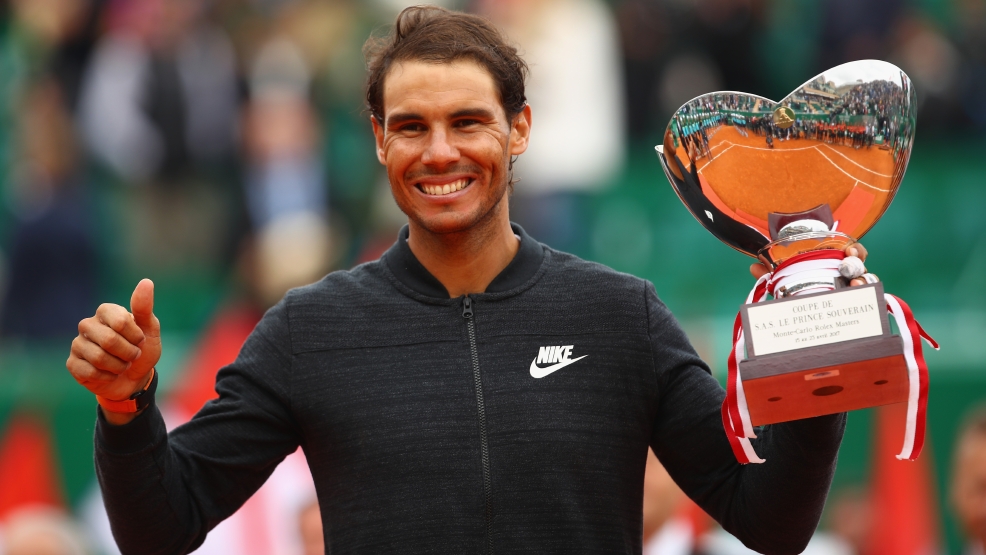 MONTE-CARLO, MONACO - APRIL 23: Rafael Nadal of Spain holds his winners trophy after his straight set victory against Albert Ramos-Vinolas of Spain in the final on day eight of the Monte Carlo Rolex Masters at Monte-Carlo Sporting Club on April 23, 2017 in Monte-Carlo, Monaco. (Photo by Clive Brunskill/Getty Images)

MONACO -- Rafael Nadal became the first man in the Open Era to win 10 titles in a tournament with his straight-sets win over fellow Spaniard Albert Ramos-Vinolas in the final of the Monte Carlo Masters on Sunday.

Nadal was presented the title by his Serene Highness Albert II, Sovereign Prince of Monaco.

"Well, is really unbelievable," said an elated Nadal. "Win 10 times in such an important event like Monte-Carlo is something difficult to describe the feeling. Every year have been a different feeling. At the same time is always a unique moment every time I have this trophy with me.

"Yeah, is a little bit of luck, lot of things together should happen to made this 10th title in an event like Monte-Carlo, no?

"I feel lucky to keep playing tennis, being healthy all those years, to compete in one of the most beautiful events of the year, without a doubt.

"Very happy to win another one. For me is a very important day in my career," said Nadal.

This was Nadal's 4th final of the year having lost to good friend and longtime rival Roger Federer in Australia, to Same Querrey in Acapulco, and to Federer again in Miami. He also lost to Federer in the fourth round of the BNP Paribas Open in Indian Wells.

Next up for Nadal is Barcelona Open, where he's going for his 10th title. The tournament recently named the stadium court after him.

"Just thanks to organization for that.," said Nadal, humbled by the honor. "They ask me about that couple of months ago. I was completely happy to heard this thing.

"When you are playing in a place that they are not only in stadiums for two weeks or for one week, is always little bit more special. The place breathes tennis, no? That tradition makes the event, I think, a little bit more important," he said.

Nadal is also endeavoring to win his 10th Roland Garros Open, where he's only lost twice.

"I want. I really want it too," said the No. 4 seed with a smile across his face.

For Ramos-Vinolas, this was a great week for him as he reached his first Masters 1000 final, beating top seed Andy Murray in the third round, 2014 U.S. Open champ and No. 5 seed Marin Cilic in the quarters, and No. 11 seed Lucas Pouille in the semis. He will crack theTop 20 for the first at No. 19 when the new ATP rankings are released on Monday.