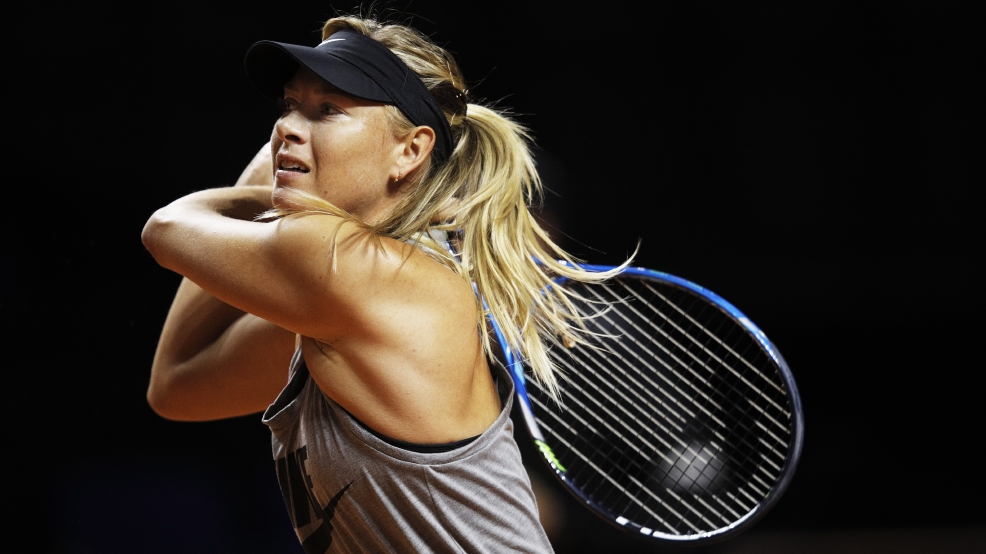 STUTTGART, GERMANY - APRIL 26: Maria Sharapova of Russia in action during training before her match against Roberta Vinci of Italy during the Porsche Tennis Grand Prix at Porsche Arena on April 26, 2017 in Stuttgart, Germany. (Photo by Adam Pretty/Bongarts/Getty Images)

Sharapova Returns to WTA Action in Stuttgart with a Bang

STUTTGART, Germany -- In her first match after a 15-month ban, Maria Sharapova breezed past 2015 U.S. Open finalist Roberta Vinci with a straight sets 7-5, 6-3 first round win on Wednesday.

After an initial nervous start where she saw herself trailing 0-2, Sharapova soon found her footing, taking charge of the rallies. In the 11th game of the opening set, the Russian broke to go up 6-5 and subsequently consolidated the break to wrap up the first set.

The second set was a routine one for Sharapova as she went up 2-0 and never looked back. For someone who hasn't competed for over two years, her serve was on point today, something that has been her Achilles heel in the past.

"It's the best feeling in the world," said Sharapova in her on-court post match interview. "The first few seconds before you enter the arena, it's been a stage of mine since I was a young girl, I've been waiting for this moment for a long time."

Vinci felt a lot of pressure coming into the match, thanks to the media circus covering Sharapova's return.

"What can I say, it was difficult. I tried to think about other things, just to stay focussed on my game but of course I had a lot of pressure before the match. It was not easy to play. I tried to enjoy that moment. Sometimes it was okay, sometimes not and that’s it. Now, next stop Madrid and I will try to play better in Madrid and Rome and have a good draw," said Vinci with a laugh.

The Italian is among a slew of players, such as Caroline Wozniacki, Dominika Cibulkova, Agnieszka Radwanska, and Angelique Kerber, who have been vocal against Sharapova receiving wild card entries into draws.

"She is a great player and I have nothing against her," said Vinci on Monday. "She paid for her mistakes. She can return to play but without any wild cards, without any help.

"I know [Sharapova] is important for the tennis, for the WTA, for everything," Vinci said. "She is a great person, a great player, a great champion, but this is my opinion."

However, Sharapova doesn't feel she should reject these invitations.

"Well, I’ve been offered Wild Cards from the tournament directors and I’m accepting them to be able to compete in the draw," Sharapova responded to the criticism in her post-match press conference. "I’m not getting a wild card to receive a trophy or golden platter. I have to get through the matches and I still have to win. And that’s my job," she explained.

Up next for Sharapova is fellow compatriot Ekaterina Makarova, who took out No.7 seed Agnieszka Radwanska earlier on Tuesday.

In other first round matches played on Tuesday, Kristina Mladenovic set up a second round battle with Angelique Kerber after a 6-4, 6-2 win over Australian Open surprise finalist Mirjana Lucic-Baroni. Miami Open champ and No. 6 seed Johanna Konta beat rising star Naomi Osaka 7-6 (5), 3-6, 6-1. Meanwhile, CoCo Vandeweghe defeated Charleston finalist Jelena Ostapenko 7-6(3), 7-6(3) to move to the second round, while No. 4 seed Simona Halep advanced to the quarterfinals with a 6-2, 6-3 win over Barbora Strycova.