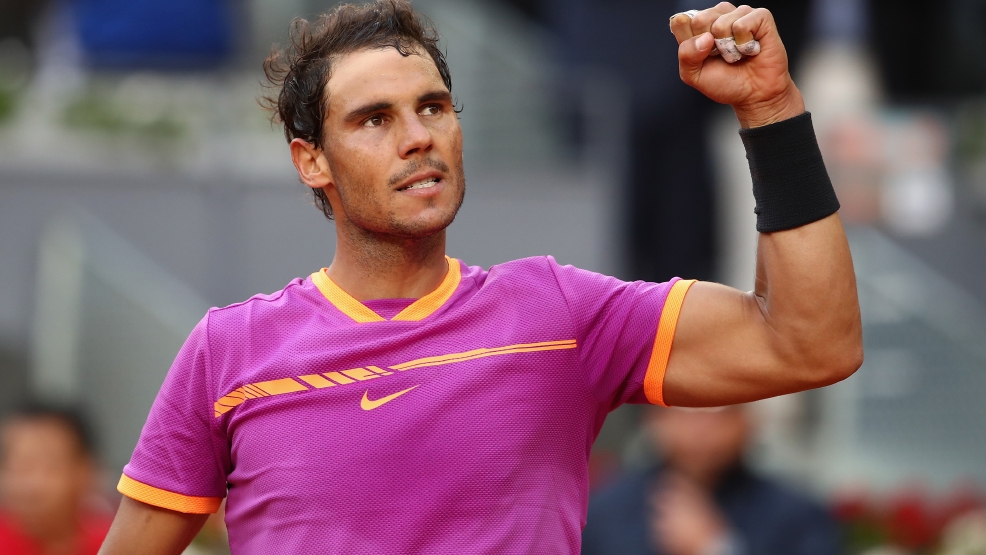 MADRID, SPAIN - MAY 10: Rafael Nadal of Spain celebrates defeating Fabio Fognini of Italy during day five of the Mutua Madrid Open tennis at La Caja Magica on May 10, 2017 in Madrid, Spain. (Photo by Julian Finney/Getty Images)

MADRID, Spain -- Fabio Fognini is one of Rafael Nadal's tough customers and today wasn't any different as Fognini pushed the four-time champion to three sets in the second round of Mutual Madrid on Wednesday.

In the first set, the Spaniard found himself trailing as Fognini served for the set at 5-4, but Nadal stopped him, sending the set to the tiebreak. In the second, the Italian only needed one break to level the match. Nadal recovered in the third, and despite giving away his break, he was able to close it out.

Nadal is going for his 52nd clay court title and his third in 2017. This was his 11th straight win.

'He's a very difficult opponent," said Nadal about Kyrgios. "He's one of the most difficult players you can play. It's true that I think on clay he's a very, very tough player. But perhaps here he's a little bit less difficult to play.

"It's tough to play Nico on any surface," said Djokovic. "Especially here where it's altitude, it played quicker a little bit. He loves playing on clay. He was obviously motivated. He has a lot of strength in his shots, a lot of precision. He can, from both corners, hit equally well.

"If he doesn't make many mistakes, he can really beat anyone. I could feel his very high quality, especially the end of the second set and the beginning of the third.

"But I hung in there and I knew that eventually I'm going to get my chances and going to get some looks on the second serves. When they're presented, you know, I was ready to use them, which I did," Djokovic said.