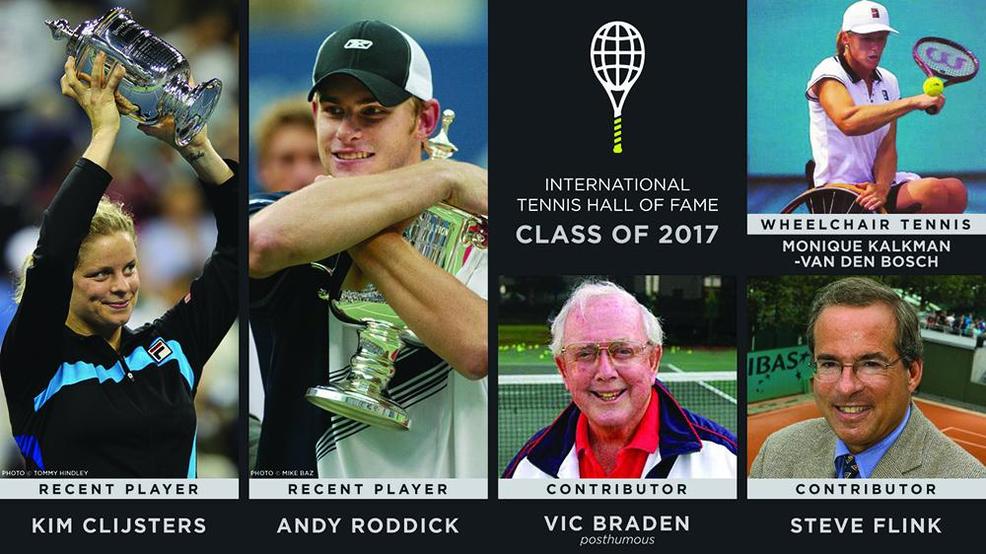 Induction into the International Tennis Hall of Fame is the ultimate recognition of accomplishment in tennis. Many of the inductees have earned a place through their talent, determination, and superior achievements. Others for their major contributions to the development, and promotion of the sport around the world. All have gone above and beyond in their commitment and have inspired love for the game in fans worldwide. The Hall of Famers are the people who have made tennis what it is today.

Former world No. 1's Kim Clijsters and Andy Roddick have been elected to receive the highest honor in tennis – induction into the International Tennis Hall of Fame. Joining them in the Hall of Fame Class of 2017 will be Monique Kalkman, a 4-time Paralympic medalist in wheelchair tennis, being honored for her remarkable career. Additionally, two individuals will be inducted in the Contributor Category. Steve Flink, a distinguished tennis historian and journalist has been elected for induction. Vic Braden, a groundbreaking tennis instructor who was among the first to apply sports science to his instructional tactics will be inducted posthumously.

One of six women in tennis history to simultaneously top the world rankings in singles and doubles, Belgium’s Kim Clijsters, was the world No. 1 player for 19 weeks and was ranked within the world top-5 for 250 weeks during her career. Bolstered by a powerful baseline game and remarkable defensive skills on court, Clijsters won four Grand Slam tournament singles titles. She is a three-time US Open champion (2005, 2009, 2010) and she was also the 2011 Australian Open champion. Clijsters won two major doubles titles, capturing both the French Open and Wimbledon titles in 2003.

Andy Roddick, of the United States, is a former world No. 1 and US Open champion. Roddick held the world No. 1 ranking for 13 weeks, and he was year-end No. 1 in 2003. Roddick finished the season in the top-10 of the ATP Rankings for nine straight years (2002 - 2010). He held rankings inside the world top-5 for 187 weeks during the course of his career.

Monique Kalkman, of the Netherlands, is a former wheelchair tennis player who achieved the No. 1 ranking in both singles and doubles. She was world No. 1 in singles for 126 weeks, and she spent a collective 264 weeks during her career in the world top-5. A passionate athlete from a very young age, Kalkman was a competitive junior tennis player in The Netherlands, prior to her illness. She was diagnosed with cancer at age 14 and, as a result, was left paralyzed from the waist down. As she recovered, Kalkman-van den Bosch revised her dreams to be fitting of her life as a wheelchair user.

Contributor Category: an Innovative Coach and an Insightful Journalist

A lifelong tennis enthusiast, Steve Flink of New York, developed his passion for the sport into a career as one of tennis' preeminent historians and journalists globally. Flink began his career in tennis in the early 1970s when Hall of Famer Bud Collins hired him to help with research at Wimbledon and the US Open. By 1974, he was on staff at World Tennis magazine, where he was a writer and editor until 1991, eloquently sharing the stories of tennis tournaments around the world to readers at home. From 1992 to 2007, he was senior writer for Tennis Week. For the past ten years, he has been lead columnist for tennischannel.com.

Vic Braden was a tennis instructor, a transformative educator of tennis teachers, and lifelong student of the game himself. Braden was a pioneer in the scientific studies of the physics of tennis, and he dedicated his tennis career to bringing rational, research-based instruction to tennis in a way that made the instruction clear and enjoyable.