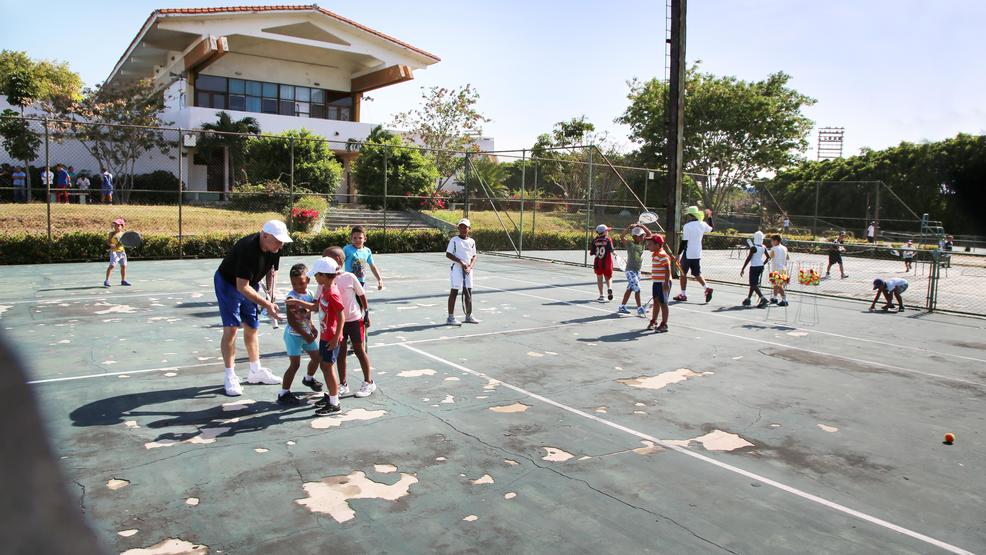 Heroes: Jake Agna's Outlook on Tennis and Life Has Had a Far-Reaching Impact

Most tennis instructors advise us to “get in a groove.” Jake Agna, a 63-year-old teaching pro from

Burlington, VT, prefers to do the opposite. For him, the sport has always been about getting himself and others out of their comfort zones.

Agna grew up on the public courts of Ohio in the 1960s, and he has never forgotten the depth and variety of the relationships he forged on them.

“We had a real diversity there,” Agna says. “There were people from all different backgrounds; you could meet anyone any day. It really taught you how to relate with all different kinds of people.”

By the turn of this century, Agna had settled into a groove as a pro, but there was something missing. At the Vermont club where he taught, tennis was no longer introducing him to new types of people, or helping him form new connections.

“I wanted to be around kids from different backgrounds again,” Agna says.

The answer, Agna found, was to go into “non-profit tennis.” There he could design his own programs, and take the values the sport teaches beyond its usual upper-class clientele.

In 2000, Agna formed a tennis non-profit called Kids on the Ball, in association with two community organizations in Burlington, King Street Center and the Boys and Girls Club. The mission of Kids on the Ball, as Agna puts it, is to help young people “learn about themselves and others through tennis.”

Rather than wait for players to come to tennis, Agna took tennis to the kids. He rented a bus and started programs in public parks during the summer, and in public schools when they were in session. The response was immediate.

“That summer was something else,” Agna says of his first year with Kids on the Ball. His courts were so bustling that he found himself dividing them into smaller and smaller sections so he could include more kids.

Agna felt some of the same excitement that he had felt on the anything-goes public facilities of Ohio. One difference, though, was the makeup of his students. In recent years, the Burlington area has taken in refugees from Nepal, Africa, Syria and Bosnia. Agna soon found himself teaching many of their kids how to play tennis. It reminded him again that the value of the sport comes not from the way it teaches people how to compete, but from the way it teaches them how to cooperate. It helps, as Agna says, give a “rhyme and reason” to life.

According to Agna, though, it isn’t just vulnerable or underprivileged kids who have benefited from his programs. So have the middle-class boys and girls who volunteer to teach them.

“Working in our program helps get affluent kids out of their bubble,” Agna says. “They have a better sense of the whole world, and they have a chance to be helpful, which they don’t always have in other parts of their lives.”

By 2015, while Kids on the Ball was thriving, Agna was feeling restless again. A lightbulb went off when he saw a segment on CBS This Morning about a trip that the jazz trumpeter Wynton Marsalis had made to Havana. Agna was fascinated by the old Cuban city, which had recently begun to welcome visitors from the United States.

“My wife turned to me and said, ‘You’ve been looking for this forever,’” Agna says. “She was right. I thought, ‘I’ve got to see what it’s like there.’”

With the help of the Cuban American Friendship Society (CAFS), Agna and his family flew south and visited the National Tennis Center in Havana. What did Agna find?

“Very resilient people,” he says. “And the worst tennis courts ever.”

Agna felt that the fastest way to get kids in Cuba playing tennis was to fix the courts. With CAFS, he embarked on two years of fundraising, traveled back and forth to Havana 13 times and hired Hinding Tennis, a Connecticut-based court-construction company, to do the renovation.

In the first brick-and-mortar project between the United States and Cuba since the Eisenhower administration, the firm brought over several cargo ships’ worth of court resurfacing material and equipment. When Fidel Castro died just as work began, Agna worried about the fate of the project. But the work continued, and the ribbon-cutting ceremony for the 10 new courts, complete with clinics run by Martina Navratilova and Jim Courier, was held this spring.

While Agna’s project was about physical reconstruction, it was the spirit of the Cubans themselves that moved him.

“They’re such lively, educated people, and there’s a sense of ‘we’re all in this together,’ which is really inspiring to see from people who don’t have much,” Agna says.

He believes that, as Cuba and the U.S. gradually grow closer over the coming years, there will be an opportunity for both sides to learn from each other through tennis.

“I think it’s a great lesson for our kids in the U.S. to meet the Cuban kids, play with them and see their spirit,” Agna says. “When I met them, I really wanted my kids in Burlington to come down just to see how they act.”

At 63, you might think helping take tennis back to Cuba would be the culmination of a life’s work for Agna. Instead, his experience in Havana has only made him more eager to bring grassroots programs to different parts of his own country that have never been considered tennis hotbeds. Next on his map are the Bronx and New Orleans.

“Tennis needs an infusion of fun,” says Agna, who believes that the best way to grow the game is to get as many people from as many different places to try it.

“You let the sport teach the sport.”