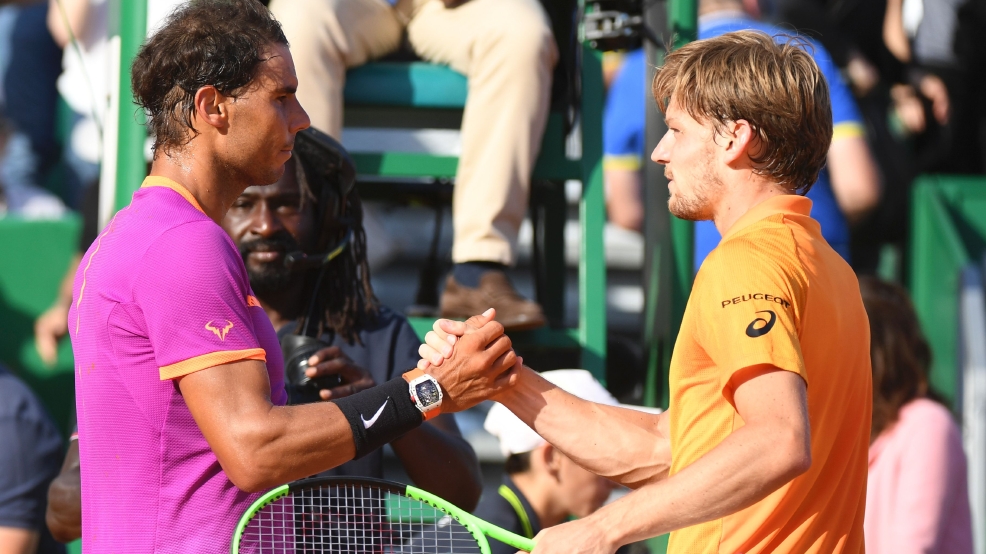 MONACO — On Sunday, No. 4 seed Rafael Nadal will play for his 10th Monte Carlo title after a straight sets win over 10th seed David Goffin in the semifinals of the Monte Carlo Masters on Saturday.

The win tomorrow will also give nine-time winner Nadal his 50th clay court title, breaking his record of most clay court titles in the open era (he currently shares the record with Guillermo Vilas).

Things didn't look good for Nadal in the early part of the first set as Goffin picked up from where he left off yesterday against Novak Djokovic, playing unbelievable tennis, bullying Nadal all around the court. Down a break 2-3 in the sixth game and facing a game point to go down 2-4, chair umpire Cedric Mourier overruled the linesman’s call on Nadal’s forehand shot that went wide, which in turn rattled Goffin. Video replay showed Nadal's shot was out, but Goffin couldn't challenge the call because clay court tournaments don't use the now popular Hawk-Eye since the mark is easy to see on clay.

The momentum switched and Nadal surrendered only one game after that on his way to the 6-3, 6-1 win, setting up an all-Spanish, all-lefties final against Albert Ramos-Vinolas.

It's fair to point out that the blame shouldn't be placed on Nadal as it wasn't incumbent on him to sort out this now infamous mess. In fact, the linesman should have corrected the chair umpire and this whole thing would have become a non-factor. There was no reason for the crowd to boo the defending champ, who had no dog in this fight.

"The proof that I believe on what David thinks when I see that David marks the ball,' explained Nadal about the controversial call. "I went to pick up the towel, preparing for the next game. You can check on the TV.

"When the umpire goes down and says the ball is good, what I can say? No, the ball is out. That's why there is an umpire there. If the ball is on my side, I see the ball is in, I give the ball to the other side. There is realistic, no?" Nadal commented.

Nadal didn't believe that if the call had gone against him, it would have changed the outcome of the match as the incident happened earlier in the match.

"I understand that situation didn't help him," said Nadal. "But we cannot be hypocrites and say in a tennis match that a point of 3-2 change everything. In tennis there is a lot of points, no? Is not in football that one decision in some minute make the difference. In tennis, we play so many points.

"It's true that you never know what's going on. If that's 4-2, I don't know if the ball was good or was out. I really don't care because I know I didn't make anything wrong. I was hundred percent correct. That's it.

"I am sorry for him. But I believe that at the end of the day he's happy that he played a great event. He's playing great level of tennis since beginning of the season. He's in a good position to fight for important things because he has the level and he has the confidence," said Nadal.

Should Nadal win the final, he will become the first man in the Open Era to win 10 titles in one tournament. The final will be Nadal's 11th in Monte Carlo and the first for Ramos-Vinolas. The defending champ leads 2-0 in his head-to-head against Ramos-Vinolas.