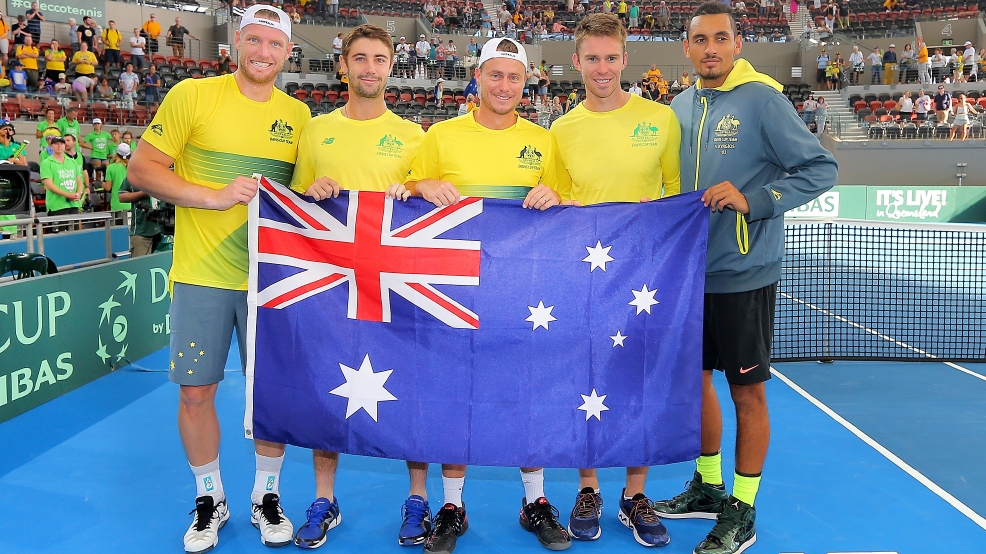 BRISBANE, AUSTRALIA - APRIL 09: (L-R) Sam Groth, Jordan Thompson, Lleyton Hewitt, John Peers and Nick Kyrgios of Australia pose for a photo after their victory in the Davis Cup World Group Quarterfinals between Australia and the USA at Pat Rafter Arena on April 9, 2017 in Brisbane, Australia. (Photo by Bradley Kanaris/Getty Images)

It's been a massive week over here in Australia. Winning 3-2 against the USA at home here in Brisbane has been one of the most enjoyable weeks in my career. Davis Cup is so different from what we normally go through week to week on tour. I really love the chance to be a part of a team. I grew up playing Aussie Rules football and I miss that team environment.

For me, the focus this week was on doubles and getting a lot of court time with John Peers. We have played a couple of ties before so we know each other reasonably well and it's more about getting as comfortable as we can before we have to play.

Davis Cup weeks have a lot of off court things we have to do. It all started on Tuesday, with our first all-in press conference. Wednesday was the official dinner, Thursday was the draw and post-draw media.

The tie started in the best possible way. Jordan Thompson getting a win against Jack Sock was a huge effort and really set up the weekend. Nick Kyrgios then beat John Isner, which was a really high-quality match. Then, on Saturday, it was myself and Peersy. We started great winning the first set but the momentum swung in the 2nd and 3rd sets and we were down 2 sets to one. We fought hard and won the 4th but couldn't quite get it done losing 6-3 in the 5th set.

Losing in Davis Cup hurts more than most weeks, I think. You're out there playing for more than just yourself. You're playing for the team, your captain, all the support staff but most of all for your whole country. The boys rallied around us though, and Nick played great on Sunday to get the win for us. I was sent out for the dead rubber which was a good chance for me to get another singles match.

Sunday night was fun - a good celebration with the team - but now it's back to Melbourne for me. A couple of days off and then into preparation for the clay court swing. I'll let you know how my week ahead goes!