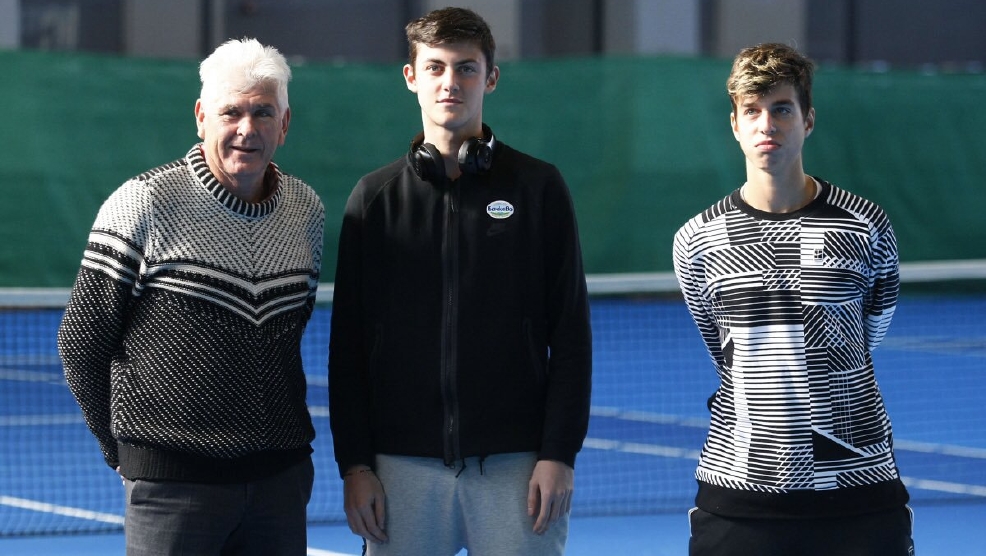 Bulgarian Alex Lazarov in the middle during Sofia Open

Michael Steinberger: 'The Racket He Used in Sofia Had a Small Hole in the Frame'

The Saturday before last, the Wake Forest University men’s tennis team had an away match against the University of Texas. Alex Lazarov could have been in Austin with the Wake Forest team but wasn’t. Instead, he and his father drove 11 hours that weekend from their home in Sofia, Bulgaria to the coastal town of Rovinj, Croatia, population 14,000, where he was entered in a $15,000 futures event. Alex was road-tripping with his father/coach rather than the Wake Forest team because he decided back in December to pass up a scholarship offer from the Demon Deacons in order to try to cut it on the pro tour. At a time when college tennis is increasingly regarded as the prudent option for players whose results haven’t indicated sure-to-be-top 10 talent, Alex made a bold choice. The next 24 months or so will reveal whether it was a wise one.

Alex is 19 years old and is currently ranked 598 in the world. So why I am telling you about him? Here’s why. He’s the son of a friend of a friend, and I met him two years ago when he spent a week in Delaware, where I live, prior to playing the 2015 US Open boys’ singles event. I arranged a couple of matches for Alex, and even hit with him myself for about 30 minutes, during which he tortured me with acutely angled forehand drives while his father Krassi, who played professionally and reached a career high on the ATP Tour of 442, stood on the sidelines tartly noting the technical flaws in my game (it was a trying half-hour). Alex made a great impression in Delaware—he was very gracious with everyone that he met, and he came across as a smart, inquisitive kid who could succeed in life even tennis turned out not to be the ticket.

I went up to New York to watch Alex’s first match at the Open, which turned out to be his only match—he was forced to retire in the third set with an injured finger. Nick Bollettieri watched his match with me, and while he was impressed by Alex’s play, particularly his one-handed backhand (a rare thing in junior tennis these days), he was adamant that Alex needed to go to college. He pointed out that with players peaking so much later now, there was no need to turn pro as a teenager unless it was clear that you had Murray or Djokovic-level talent, and that from both a developmental and financial standpoint, going to college for at least a few years was the most sensible move for a kid like Alex.

I wrote an article about Alex’s visit to Delaware and about the big decision facing him, and after the story was published, I kept track of his progress. He returned to the United States later that year for the Eddie Herr International Junior Championships in Bradenton, Florida, and the Junior Orange Bowl tournament in Miami. At the Eddie Herr, Alex lost in a third-set tiebreaker to Canadian wunderkind Felix Auger-Aliassime, squandering three match points along the way. At the Orange Bowl, he also lost in a third-set tiebreaker, this time to Norwegian Casper Ruud, who was the number one seed (and who reached the semis of the Rio Open last month). When I caught up with Alex by phone recently, he told me that as wrenching as those losses were—“It was so painful; the worst feeling ever”—they were significant factors in his decision to forgo college. “If I’d been beaten miserably, then I could say that I don’t belong with those players,” he said. “But after those losses, I realized I could play with the best in my division.”

Last year was his first season playing on the pro tour. His results were reasonably encouraging. He won one futures event, in Serbia, and reached the semifinals of four others. But he kept his options open by signing a letter of intent with Wake Forest. The plan was for him to start school this January. Wake Forest seemed to want him pretty badly—head coach Tony Bresky traveled to Tunisia in July to meet with Alex when he was playing in a Davis Cup tie there, and when it became clear that Alex was wavering, Bresky went to Sofia in December to try to persuade him. To no avail, ultimately.

I can’t say that I was surprised to hear that Alex had spurned the offer from Wake Forest. When we spoke right after his loss at the US Open, it was clear that he was not very enthusiastic about going the college route. “I’ve had such good momentum and I don’t want to lose it,” he told me. “I want to see how far I can get in the next few months. If I don’t get the results I want, I might go to college.” Over coffee one morning in Delaware, his father had told me that he believed Alex could be a top 10 player; with his father so confident of his prospects, it seemed inevitable that Alex would skip college, at least for now.

I spoke recently with Krassi, too. He said that he was happy with Alex’s decision. He said he didn’t want to force his son to go down a path that held little appeal to him. “Alex wants to play tournaments,” Krassi told me. “If he went to college, he’d always be unhappy with me that he didn’t try to play professionally.” Alex played in the Sofia Open last month (he was given a wild card berth), and after losing 7-6 6-2 in the first round to Moldovan Radu Albot, ranked 92 in the world, he spent the rest of the week serving as Grigor Dimitrov’s hitting partner. Krassi said that what he observed during those practices left him even more encouraged about Alex’s prospects. He said Alex had no trouble rallying his fellow Bulgarian and had a bigger first serve. He said he heard a number of people commenting on the easy power that Alex generated; the fact that Dimitrov sought him out multiple days was, in Krassi’s view, significant, an affirmation of Alex’s potential.

But as beneficial an experience as it was, it also underscored for Alex the gap between the life in the big leagues and life in the minors. Dimitrov is a big star, and has deals with Nike, Wilson, and Rolex. Alex’s only endorsement at the moment is with a Bulgarian water company. He said the company is generous with him, but it’s not the same as having a deal with a major athletic brand. For a time, he was sponsored by Head, but that ended, and gear is now a problem: he told me the racket he used in Sofia (he only had one in his bag) had a small hole in the frame. He conceded that not having a racket or sneaker deal is also a disadvantage psychologically. “It is a different feeling when you step on the court knowing that you are representing Nike, Adidas, Head, Wilson,” he said. “It makes you feel special, something more than others. It helps you get through some of the matches. It gives you huge confidence.”

Being based in Bulgaria is also a disadvantage. Dimitrov lives abroad, and Alex can’t find regular sparring partners who can push him (despite producing Dimitrov, Bulgaria is not exactly a tennis powerhouse.) He and his father both told me that he needs to leave Bulgaria for his career to take off. Ideally, Alex would like to be based at an academy, where he can get coaching (Krassi is ready to entrust Alex’s game to someone else, and he is going to focus on developing Alex’s 12-year-old brother George) and have a full stable of practice partners. Alex is especially smitten with the idea of moving to Stockholm and basing himself at Magnus Norman’s Good to Great Academy. But as of now, he has no connections there, no one who can make an introduction that might get him a look. He is desperate to leave Bulgaria. “As much as I hate to say it, the more I stay in Bulgaria, the more I suffer. It’s just a waste of time. Staying here means just staying at a certain level. No improvement. I can only improve if I leave the country.”

The Wake Forest offer would have been a way out, but Alex insists he made the right decision in passing up the scholarship. He admitted that he was never really into the idea of going to college. He just wanted a place to train, and classroom commitments and even his obligation to play for the Wake Forest team would have gotten in the way.

Wake Forest is doing fine without him. In fact, they are now the number one ranked team in the country, the first time they have ever held the top spot. In Austin, they beat Texas 4-0 and followed up that win with a 4-3 victory a week ago Monday over Texas Christian University.

Two days later, Lazarov lost his first round match in Rovinj, falling in three sets to an 18-year-old Romanian named Calin Manda, ranked 1236 in the world.