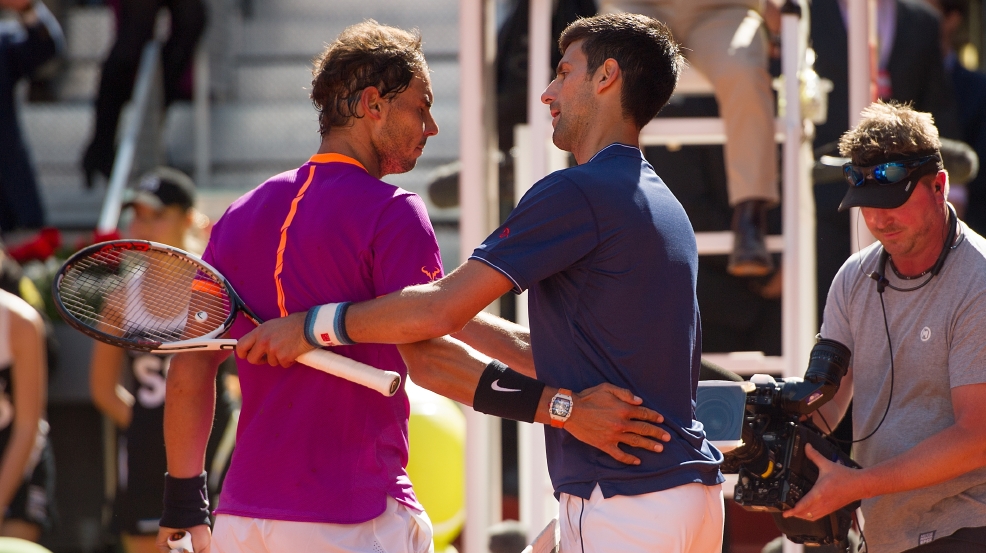 MADRID, SPAIN - MAY 13: Rafael Nadal of Spain is congratulated by Novak Djokovic of Serbia after winning the semi-finals match during day eight of the Mutua Madrid Open tennis at La Caja Magica on May 13, 2017 in Madrid, Spain. (Photo by Denis Doyle/Getty Images)

Nadal Takes on Thiem in Madrid Final After Djokovic Win

MADRID, Spain -- After losing seven straight matches against Novak Djokovic, Rafael Nadal put on a splendid display as he dispatched the defending champion in the semifinals of Mutual Madrid Open Saturday.

Nadal extended his winning streak to 14 matches and is one win away from his 52nd clay court title and 72nd tour-level trophy. This particular win over Djokovic puts Nadal as a clear favorite to win his 10th Roland Garros.

"It's true that some matches are more important than others," said Nadal referring to breaking the seven-match losing streak. "But I'm just here to try to make it the best possible way, to play my best tennis, and of course to beat an opponent such as Novak, it gives you a lot of confidence. It shows you you're working in the right way."

Up next for the four-time champion is Dominic Thiem, who took out Pablo Cuevas in straight sets 6-2, 6-4. Nadal leads their head-to-head 3-1 with Thiem scoring his win on clay in 2016. However, Nadal won their last encounter last week in the final of the Barcelona Open, where he won his 10th Barcelona trophy.

This was Djokovic first semifinals since winning Doha in January.

"Well, first of all, it was really good to play in semifinals of big event, and to play against one of the top rivals I have in my life," said the No. 2 seed after the match. "I haven't had that feeling in months, so it's great to feel that.

"It was a positive week, a positive experience. I take, as I say, more positives than negatives into the next week in Rome. As I go along, I hope to continue getting better and getting stronger.

Djokovic, who won his first Roland Garros in 2016 to complete his career Grand Slam had a very straight forward answer when asked if he thought Nadal was the favorite to win Roland Garros.

"Yes, yes, he is," said the defending champ.

Last week Djokovic announced his split with his long-time coach Marian Vajda and two other team members to find "the winning spark on the court again," calling the move "shock therapy." He's yet to announce his new team.