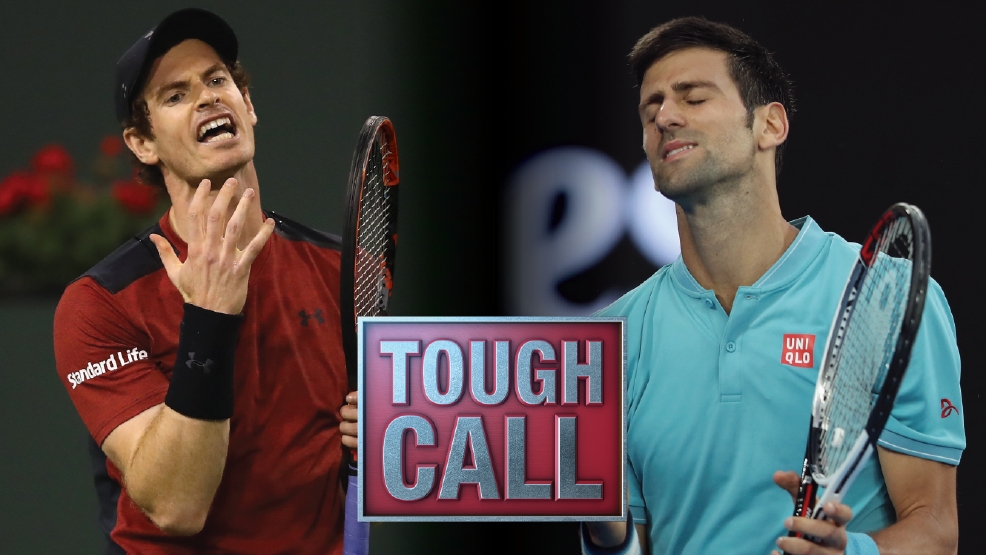 Tough Call: Who Has More at Stake at Roland Garros—Murray or Djokovic?

Here is this week's edition of Tough Call. Both Andy Murray and Novak Djokovic have gotten off to rocky starts in 2017. Which player has more at stake at Roland Garros? Murray or Djokovic?

- He’s looking for his first major since becoming World No.1.

- He has finals points to defend (he was a runner-up to Djokovic last year).

- He lost early in Australia, to Mischa Zverev in the fourth round, and he won’t want to lose before the quarterfinals of back-to-back majors (which he hasn’t done since 2008).

- He’ll be the defending champion, so he’ll have a huge target on his back.

- If he hasn’t lost it by then already, he could be in jeopardy of losing the No.2 ranking.

- He lost early in Australia, to Denis Istomin second round, and it’s been even longer since he’s lost before the quarterfinals of back-to-back majors (it’s been since 2006!)

In my view, Murray has slightly more at stake during this upcoming edition of Roland Garros than does Djokovic. Djokovic completed a career Grand Slam last year in Paris, becoming the first man since Rod Laver in 1969 to sweep four majors in a row. Murray realizes that 2017 could be one of his last opportunities to come through on the clay and take the French Open at the age of 30 for the first time. The sense of urgency for the British competitor to capture the world's preeminent clay court title is greater than it is for Djokovic to defend his crown.

For Djokovic, anything but a title at the French Open will likely feel like a letdown after last year, and possibly a sign of decline. But either way, he'll still have a Roland Garros win under his belt. That's something Murray is still looking for, and which, at 30, he may not have too many more years to achieve. Murray's best chance of keeping his career-Slam dreams alive could come over these two weeks in Paris.

By winning the French Open last year, Novak Djokovic shed a giant weight from his shoulders. But since then, the 12-time Grand Slam champion has regressed. While Murray can lose the No. 1 ranking in Paris, Djokovic has more on the line—namely, the opportunity to continue climbing the ladder among the sport’s all-time greats. It’s a flimsy ladder.

Djokovic has more at stake because expectations are higher for him, and he's got something to lose as the defending champion. He's also has got more to prove since he's been on a title drought and has lost the unbeatable aura he recent had. Murray has never won in Paris, and while he may be No. 1, no one is expecting him to win there. He'll have more at stake at the next Slam, Wimbledon.

At this point in his career with a Career Grand Slam under his belt, Djokovic doesn't need to prove himself now that he's won the elusive Roland Garros title. Murray, however, hasn’t really played the top guy role convincingly. Winning Roland Garros will be a good way to redeem himself and show the world he's a legit No1.

Definitely Djokovic. The reigning champion has won just two titles since Roland Garros last year and his star is fading fast. Murray, on the other hand, has never won the French Open and is still No. 1. With no clear-cut favorite in Paris, Djokovic has a golden opportunity to right his ship and get his career back on track. The Serb has far more pressure to win this tournament than his Scottish counterpart.