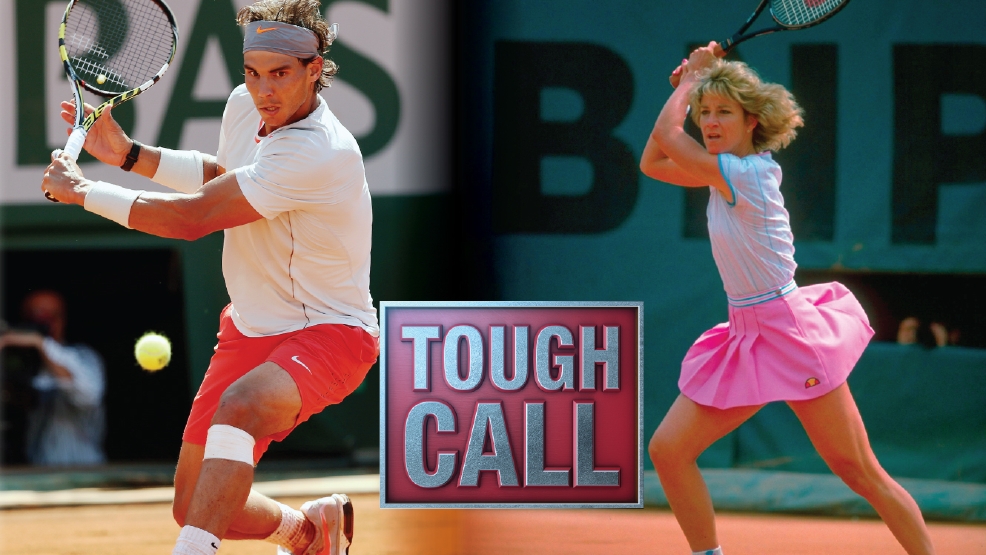 - She’s also won more clay court titles than any woman in the Open Era with 66 (which is more than twice as many as second place on the list: Steffi Graf with 32)

- She won 125 clay court matches in a row between 1973 and 1979, which is the longest single-surface winning streak in the Open Era, male or female

- He’s also the only man in the Open Era to win the same major 9 times (and one of only two players, male or female - Navratilova won 9 Wimbledons)

- He’s actually won Monte Carlo, Barcelona and the French Open - all clay court events - 9 times each (no other man in the Open Era has won any event, at any level, 9 times)

I’d give a slight edge—so far—to Evert. As off-the-charts as Nadal’s nine Roland Garros titles are, Evert’s 125-match win streak is a show of even greater dominance, especially when you consider that more than a quarter of the sets she won were bagels.

Never has a player been so associated with a particular playing surface as Nadal with clay. And considering what he has achieved, for over a decade in the sport’s most physically demanding era, Nadal can be second place to no one on dirt.

Nadal has to be the winner, even if by a small margin. It's not simply because he owns two more Roland Garros titles, but he has consistently stopped legends like Roger Federer and Novak Djokovic from encroaching on his territory in the midst of what's arguably considered the best era in men's tennis.

The fact that the Nadal won four consecutive French Opens from 2005-2008 and from 2010-2014, beating all-time great Roger Federer in four finals and Novak Djokovic in two, is quite extraordinary. It's a tough call but my pick is Nadal over Evert.

Choosing between Rafael Nadal and Chris Evert as the greatest clay court player of all time—male or female— is a nearly impossible task. They are the record holders at the French Open with nine and seven singles titles respectively, although Evert would surely have equaled and probably surpassed Nadal had she not been ineligible to compete as a World TeamTennis participant from 1976-78 when she was unstoppable on that surface. In the end, I choose Evert because she went nearly six years—from the summer of 1973 until the spring of 1979—without losing on that surface, winning an astounding 125 clay court matches in a row in that span. After weighing it carefully, despite much wrestling over the decision, I pick Evert over Nadal by a whisker.