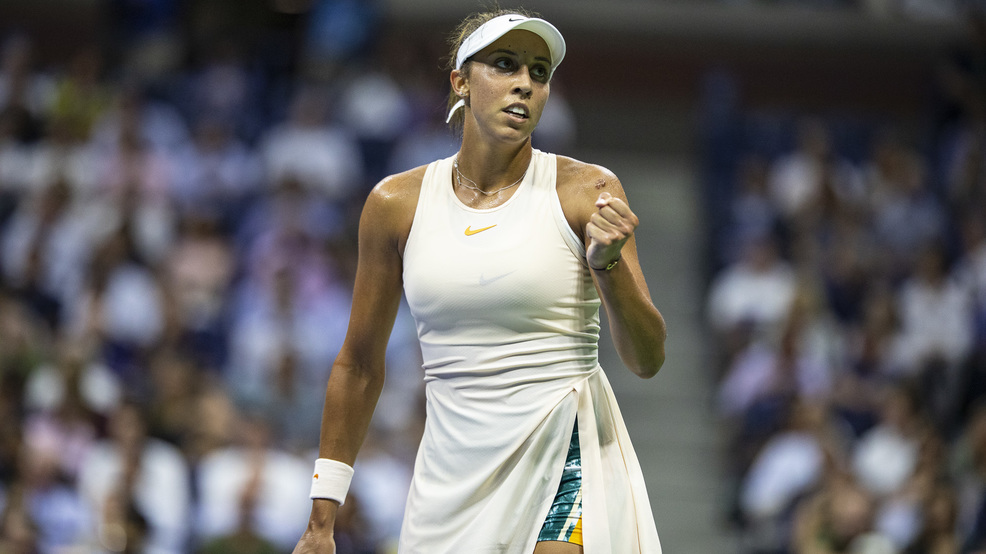 NEW YORK—There is so much to like about the way Madison Keys plays tennis. From her exquisite serve—unquestionably one of the finest motions in contemporary tennis—to her powerful groundstrokes, Keys at her best is as forceful as any player in women’s tennis. Runner-up at the US Open a year ago, tonight the 14th-seeded Keys advanced to the semis for the second-straight time, beating the 23rd seed, Carla Suarez Navarro, 6-4, 6-3, in 83 minutes.

But much as Keys can compel, she can also confound. It is often incredibly baffling to watch a Keys match, to witness balls fly several feet outside the court, puzzling decisions in shot selection, nerves seep into hands and feet—and then, at the end of a set, see it all come together in rapid-fire fashion.

Typically revealing was the final game of the match. Having reached match point at 5-3, 30-30 with a 105-m.p.h. wide ace, Keys double-faulted. At deuce, Suarez Navarro seized control of the point, making her way to net to knife a sharp backhand volley down the line that elicited a missed passing shot. Down break point, Keys responded with a superb forehand down-the-line winner. On deuce number two, Keys patiently navigated her way through a nine-ball rally, terminating it with an untouchable down-the-line backhand. Match point number two saw her drive a backhand through the middle hard and deep enough that Suarez Navarro drove her reply wide.

“I think I've gotten a lot better managing my emotions once it gets to this part [of a major] and knowing that everything is going to be probably more amped up,” said Keys, “and not shying away from those but just really being honest about it and talking about it.”

The two matches these had previously played had both gone Keys’ way, though each was a three-setter. Underestimate Suarez Navarro at your own peril. With her sleek one-handed backhand and scrappy, dart-like movements, the 30-year-old Spaniard has a pesky, plucky spectrum of shots that keep her in a lot of matches. Here in New York, she’d won three-setters versus such eclectic competitors as Nicole Gibbs, Kristina Mladenovic and sixth-seeded Caroline Garcia.

Suarez Navarro’s most recent victim had been the 22nd seed, five-time Grand Slam champion Maria Sharapova. That win had only taken two sets, Suarez Navarro propelling so many balls into awkward places that Sharapova committed 38 unforced errors, nearly twice as many as Suarez Navarro’s tally of 20.

WATCH—Daily Mix from Day 10 at the US Open:

Said Keys, “She does a really good job, especially tonight, of holding the baseline and redirecting the ball. So I knew that I was going to have to play really well but also know that she's going to come up with some great shots and defend really well.”

Having watched Keys play many times over the years, my belief is that it’s very important for her early on in a match to sustain a lengthy rally—not on every point, but enough to prove to both the opponent and, perhaps more importantly, herself, that she can stay in a point long enough to make what I’ll call a declaration of patience. Once that’s occurred, Keys can safely navigate her way towards the aggression that comes so naturally to her.

So it was that on the first point of the fifth game, serving at 2-2, that Keys won a 19-ball rally. Though the game eventually went to deuce, Suarez Navarro earning a break point, Keys would also in that serving game win a 25-ball rally. Having demonstrated her ability to endure, Keys soon enough felt safe to assert. In the first set, she would strike 14 winners (to only eight for her opponent). With Suarez Navarro serving at 4-5, Keys crushed a down-the-line forehand winner.

The second set went quite similarly, but in this case, Keys obtained her go-ahead break earlier. Suarez Navarro served at 2-3, 15-all. Keys hit an untouchable inside-out backhand service return, followed at 15-30 with a massive forehand that earned her a pair of break points. At 30-40, Keys rolled a crosscourt backhand with enough pace and angle that Suarez Navarro could only hit it into the net. Ahead 4-2, Keys held service twice more.

Much as point-to-point consistency is valued, there is certainly a precedent for the sporadic quality that flavors Keys’ matches. There once was another player with a great serve, powerful groundstrokes and a remarkable aptitude for breaking open a match in the late stages of a set. His name was Pete Sampras. Unlike Sampras, though, Keys for much of her career has found herself at the mercy of her emotions.

But as Keys noted this evening, “last year a lot of my matches were kind of emotional roller coasters, and this year I feel like I have been much more solid mentally, and in tougher times keeping my cool a little bit better and not having to have the big emotional swing to kind of try to get back into matches.”

So this is the Madison Keys conundrum: She is sensitive and thoughtful, deeply aware of her emotions. But as Sampras demonstrated, to play this kind of gunslinger tennis requires a cucumber-like cool. Let the other players accrue points toothpick-by-toothpick. The Sampras-Keys approach calls for drawing your pistol quicker at high noon. Keys’ ability to balance heart and head figures to be one of the more fascinating stories of the last few days of this year’s US Open.