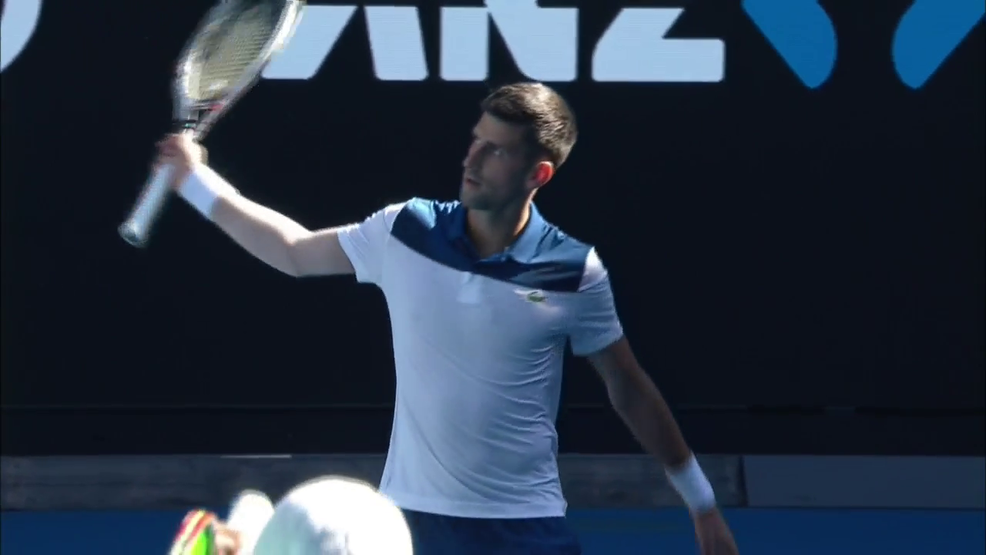 Joel Drucker: Back to Work - Djokovic Sharp in First Match Back, at Australian Open

MELBOURNE—One of the pet sayings of Novak Djokovic’s former coach, Boris Becker, was that tennis years were like dog years. If we accept Becker’s assessment, then what to make of the half-year that had passed since Djokovic had last played a tournament match?

As Djokovic took the court for his opener versus 63rd-ranked Donald Young, the mystery of sports loomed. Assuming his longstanding elbow injury had heeled, Djokovic would be healthy and eager. But those two factors took a back seat to the aspect of tennis that truly drives the car. It’s one thing to be fresh. It’s another to be sharp.

As Djokovic noted, “playing a practice set and playing an official match in a Grand Slam is quite different because, you know, obviously you have nerves that kick in. . . . I just tried, you know, to embrace whatever emotions are coming, but at the same time trying to focus myself as much as I can on the present moment.”

Though Young had lost their two prior matches, the adroit lefty had served for the second set and held two set points the last time these two had played. But that had come in Eastbourne, on the slick kind of grass that highly aids Young’s game. Australia was a horse of a different color, its slow hard courts tailor-made for Djokovic’s metronomic brand of baseline tennis.

Call it the Novak Smother. From the start, he dictated play against Young with comprehensive oppression. In a 12-month period that had seen the resurgence of the uber-geniuses, Roger Federer and Rafael Nadal, it was easy to forget Djokovic’s sustained craftsmanship, the mastery of the quotidian—depth, movement, balance. Go up against someone like that and the question grows increasingly louder: How am I going to make this guy miss? As the volume rises, Djokovic’s opponents often find their technique subtly but profoundly compromised.

In Young’s case, this happened rapidly. Djokovic won the first set, 6-1, in 23 minutes. Young had committed 17 unforced errors, Djokovic only two. The one-way traffic continued in the second, with Djokovic snapping up that one, 6-2. The match by this point was 61 minutes long.

The third set lasted nearly as long as the first two. But over the course of 50 minutes, only sporadically was Young able to assert himself—a whipped forehand here, a volley there. Djokovic held it all in his hands. Even when Young fought off five match points at 3-5, a major comeback seemed unlikely. Djokovic held handily at 15 and then gave a mildly subdued version of his four-cornered, post-match celebration.

So wide was the competitive gap in this match that it was hard to determine the effectiveness of Djokovic’s new, truncated service motion.

“Well, second serve was very, very good,” said Djokovic, who won 71 percent of his second serve points. “First serve was kind of up and down.” Given that he’d won 79 percent of those deliveries and only faced two break points, it was hard to gauge much.

But just as Djokovic had smothered Young inside the lines, what overwhelmed his post-match press conference were queries regarding several stories that had come out regarding comments Djokovic had made at a recent ATP meeting. Rumor had it that Djokovic had discussed the possibility of forming a player’s union, seeking a bigger cut of each Slam’s revenues and taking other steps.

Though like many players, Djokovic is rather cryptic and charmingly elusive about what he discusses with his coaches, on this occasion, the topic being matters of tennis economics and player activism, he spoke with the persuasive velocity of a political candidate.

“Well, I saw that some of you have written a story that has been a little bit exaggerated,” he said. “You've taken things out of the context. I saw that you've portrayed me as someone who is very greedy, asks for more money and wants to boycott.

“But I respect your, you know, freedom and decisions to do that. But not much of what you have wrote is true. What happened is that we, players, just wanted to have us players talk about certain topics. I don't think there is anything unhealthy about that. We get together, a hundred players get together two or three times in a whole year. This is one of the places where we get together.

“We wanted to use this opportunity to speak about certain subjects and see how everyone, you know, reacts to that, and I guess see what opinions are. There was no decisions being made. There was no talks about boycott or anything like that.

“That's all I can say really. Nothing much else to add.”

Further questions ensued. The anticipated story a week ago was the prodigal son’s return to the scene of his greatest triumphs. Now it was cluttered. Time would tell if Djokovic could dispatch all that complication—necessary or desired?—with the same ease with which he’d handled Young.