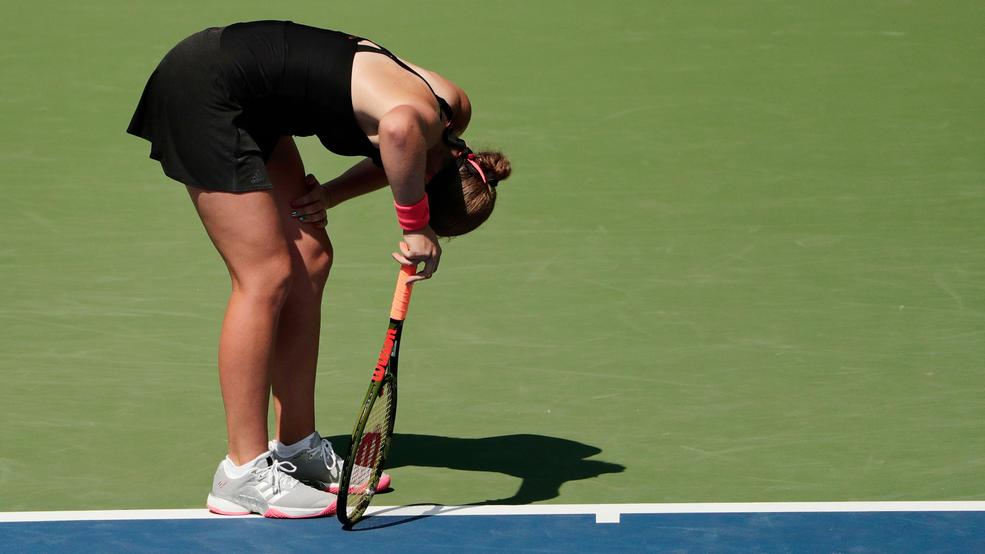 Joel Drucker: Blistering Heat Made Tuesday at the US Open a Survival of the Fittest

NEW YORK—For Novak Djokovic, an astute decision by the USTA and a swift ice bath helped him turn the corner. For his opponent, Marton Fucsovics, it plunged him into the abyss. For Jelena Ostapenko, air-conditioning saved the day. For the matter-of-fact Angelique Kerber, water was the simple solution. For Marin Cilic, it was the kind of situation that makes the US Open challenging beyond belief—but also, even more rewarding, a logical view given Cilic’s status as a past champion. Others, of course, such as the affable Kiki Bertens, explained the situation in textbook manner: It’s the same for both players.

Heat and humidity were in the forecast today. As early as 9:00 a.m., Tennis Channel analyst Jim Courier described the weather as “soupy”—though, alas, hardly the appetizing kind. It was hot, it was sticky, with not a trace of wind. For the women, as was the case yesterday, the tour’s longstanding extreme heat rule was in effect, permitting a 10-minute break between the second and third sets. The men have a rather broad approach that relies heavily on discretion. So it was that at 1:00 p.m. today, no doubt after significant huddling, that the USTA declared that men would be permitted a 10-minute break between the third and fourth sets.

This proved a godsend for Djokovic. After nearly going down two sets to one in Ashe Stadium—more oven-like than ever due to the way its roof partially encloses the court—Djokovic emerged just fresh enough from a 45-60 second long ice bath to bagel Fucsovics in the fourth in 37 minutes.

Said Djokovic, “I thought the 10-minute break was great. I thought it was, as I said, a much-needed break for both of us after playing two-and-a-half hours, struggling. To be able to go back in the locker room and change clothes, take shower, grab something to eat, whatever, and just refresh, be in the shade, be in a cooler room, and then go out, it's quite different. You feel refreshed.”

Fit as professional tennis players are, it’s remarkable that even they can be felled by such oppressive conditions. But to watch the struggles that took place today—from mid-match retirements to weariness in between points to intermittently listless rallies and occasionally meager retrievals—revealed just how much heat and, most of all, humidity, can greatly sap the energy of a world-class athlete.

Petra Kvitova, a player with a history of heat-induced weariness, was glad to get through her match today in straight sets and only 72 minutes.

“And you know it’s going to be tough outside and you can’t complain,” said sixth-seeded Caroline Garcia, who dispatched Johanna Konta, 6-2, 6-2 in an hour and 15 minutes. “So I was ready for it.”

Consider days like today as close to Darwinism as tennis can get: survival of the fittest. Or perhaps, these are the conditions that truly separate the pros from the rest of us. As the great UCLA basketball coach John Wooden once said, “if you fail to prepare, you prepare to fail.”

Brutal as today’s weather was, it’s those players who’ve put in the hard yards all year long who are likely smiling in between grimacing.