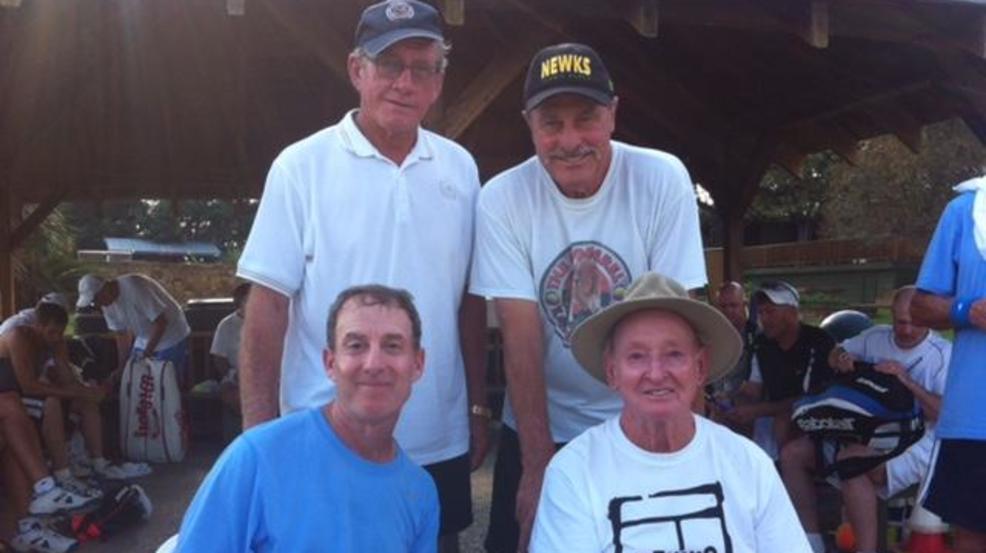 Joel Drucker: Day One of Tennis Fantasies with John Newcombe and the Legends

Monday morning and it is 5:30 a.m. in New Braunfels, Texas (30 miles from San Antonio). The setting is the John Newcombe Tennis Ranch. The event is Tennis Fantasies with John Newcombe and the Legends.

More than 100 recreational male players have gathered for an unforgettable week of blarney and beer, competition and camaraderie. They will be on four teams, captained, coached and charmed round-the-clock by 14 former pros, including such Hall of Famers as Newcombe, Roy Emerson, Fred Stolle, Owen Davidson, Mark Woodforde, Charlie Pasarell and that good mate of Roger Federer’s, Rod Laver. On this Monday there will be practice, followed by the spine of this event: three days, six matches.

I have been part of this cast and crew for 22 years, embedded as writer, player and even occasional pin cushion for the kindly barbs issued by the legends. For all but two of those years, I have played under the eye of Newcombe. He and co-captains Pasarell and Rick Leach have watched me choke like a dog, rise to the heights, struggle with weaknesses, find strengths. There came a point when I informed Newcombe that he had seen me play more than I’d seen him. “Pretty scary, eh?” said Newcombe.

Newcombe had posed another question to me seven years ago. “Was this a good healing experience for you?” he asked as the 2010 edition of the camp ended.

Six weeks prior, my wife, Joan Edwards, had died. We had been together 28 years. Joan most of all had known how meaningful the tennis was to me, that if given a choice between playing this sport and writing about it, I would discard pen for racquet (even if on the good days I could make the case that observation had its participatory qualities – well, whatever).

Observation was what I’d intended in 2010; in the worst days of my life, the chance to merely hang with mates figured to be plenty. But another Aussie legend, the pugnacious Davidson, had issued a blunt directive an hour after arrival. “You’re effing playing, mate,” he told me. “It doesn’t matter how you do. It matters that you play.” He was right, this complicated man from Melbourne who that final summer of Joan’s life had called me constantly to ask how she was doing.

As I took in Newcombe’s question on that final Friday morning, the answer was clear. “Yes, it was. But I know there are two things she would have wanted to know: How well I fought in the cauldron and how many forehands I missed.”

Newcombe squinted. “Forehands,” he said. “So she knew?” This was an Aussie’s way of saying: Wow, that was some marriage you had, mate, that your wife understood how you played tennis.

“Of course she knew.”

Joan also knew that there was no group of mates I could count on more than those from the ranch. As Newcombe said at the beginning of this year’s event, “Campers first come here to meet us legends, but soon enough, they come to see each other.”

Seven years later, the world looks different. Wounded eternally, but unquestionably less raw and scarred, open for new adventures of body and mind, heart and soul. Fittingly, after playing for Newcombe so many times, this year I’m on a team led by Emerson, a man who has coached against me for 22 years – and also, incidentally but notably, winner of more Grand Slam titles (12 singles, 16 doubles) than any man in tennis history. There will be new teammates, new practice rituals, new competitive situations – plenty of opportunities to choke and care, competitive endeavors flavored by these words the legends witnessed every time they walked out to play on Centre Court at Wimbledon: “If you can meet with triumph and disaster, and treat those two imposters just the same.” They had all done this quite well. Could we civilians?

Laver and Newcombe, Stolle and Emerson and all he other captains and coaches would tell their tales, stories of epics on each continent, on every surface, against players of various styles, in heat and cold, on grand stages like Wimbledon and Davis Cup, Roland Garros, Kooyong and Forest Hills. Those tales would enthrall deep into the night. By day, they become invested in the daytime sagas played by campers here in Texas. Speaking for all the legends, Emerson has often said, “I don’t care how well you hit the ball. I care how much effort you put into your tennis.”

“It was a match like nothing I’ll ever experience in my life,” Pasarell said one evening as he concluded the story of his 1969 Wimbledon match versus Pancho Gonzalez. That one had been played on Centre Court over two days, lasted more than five hours, Gonzalez in the end overcoming seven match points to beat Pasarell.

The next day, a Tennis Fantasies camper coached by Pasarell blew a big lead. As the disconsolate loser sat on a bench with a towel over his head, Pasarell nodded in affinity. “Bad luck,” he said. “It happens. Believe me, it happens.”

Seven years ago, as we walked through the ranch’s “Waltzing Matilda Room” soon after my first match, Davidson turned to me. “Aren’t you glad you played?” he asked. “It’s always better to play.”

Joel Drucker will be writing several stories this week from the frontlines of the 30th edition of Tennis Fantasies with John Newcombe and the Legends.