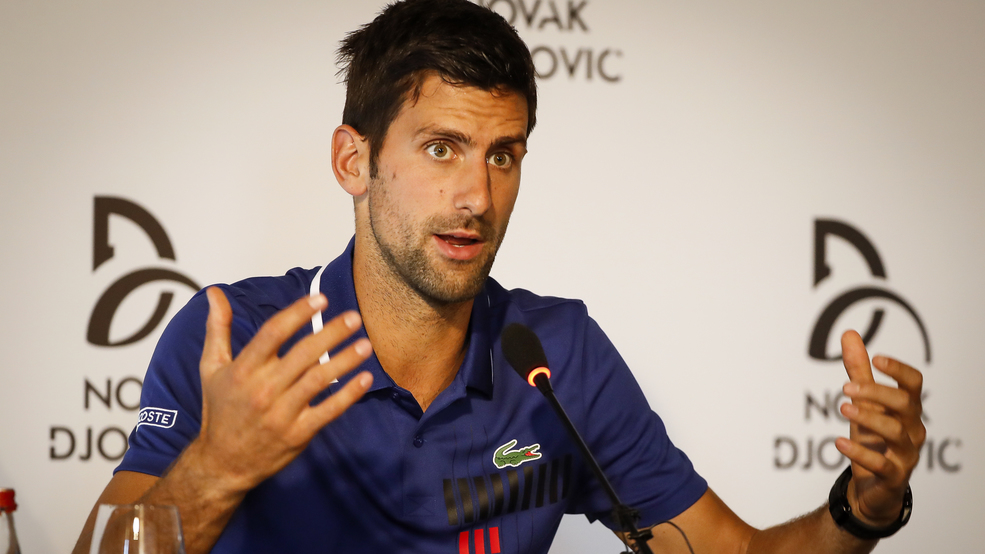 BELGRADE, SERBIA - JULY 26: Novak Djokovic speaks to the media during the press conference at Novak Tennis Center on July 26, 2017 in Belgrade, Serbia. Twelve-time Grand Slam champion Djokovic has said he will not play again in 2017 because of an elbow injury. (Photo by Srdjan Stevanovic/Getty Images)

Joel Drucker: Djokovic’s ’17 Is Over - A Few Questions

The vast majority of press releases list the name and phone number of a contact person. Often they are also printed on letterhead, showcasing the newsmaker’s organization, affiliation or management company.

But this one came on stark white paper. No contact name, no logo. The e-mail it was attached to included the name of a person, but no phone number or even the name of the organization that person was affiliated with.

The news was significant. Novak Djokovic had announced that his 2017 tennis year was over. “My elbow is hurt due to excessive playing,” he said, “and it troubles me constantly when serving, and now when playing forehand as well.”

Thus concludes an incredibly painful 13 months. Just over a year ago, Djokovic had completed the career Slam, his victory at Roland Garros giving him possession of all four majors – the first man to do so since Rod Laver in 1969.

Since then, Djokovic’s best Slam effort was a run to the finals of the US Open, where he was upset by Stan Wawrinka. Most recently, he retired mid-match from his Wimbledon quarterfinal versus Tomas Berdych.

Like Roger Federer a year ago, Djokovic is now taking a significant sabbatical. Injuries have also forced Rafael Nadal to do this several times in his career. Alas, to the detriment of viewers around the world, fans in local cities, as well as sponsors and tournament organizers, these kind of health-related exiles appear to have become a key plot point in the contemporary tennis tale. Has the game become too physically demanding, be it the tennis itself, the travel or other demands? Are the slow hard courts the game is often played on, coupled with the exceptional power combo of today’s racquets and strings, excessively grinding down bodies? Or are these just discreet cases, Djokovic, Federer and Nadal the victims of their own sustained success?

Though early in his career he had his share of mid-match retirements, Djokovic has primarily been an exceptionally sturdy competitor, playing all four majors ever since his debut at the 2005 Australian Open. Certainly there is the matter of healing his elbow and perhaps sorting out with Andre Agassi, identified in the release as his “head coach,” how best to resurrect not just his elbow, but his psyche. At his best, Djokovic was impregnable, an exquisite mover adept at smothering all opponents, be they attackers, defenders or any others in between. But as the wheels have come off over the last year, he has been curiously passive. The margins are indeed that narrow.

Meanwhile, with Djokovic exiled from main street, with Andy Murray also struggling physically, fans ponder a possibility of an occurrence that has never happened: Federer and Nadal playing one another at the US Open. In the meantime, one hopes the best for Djokovic.