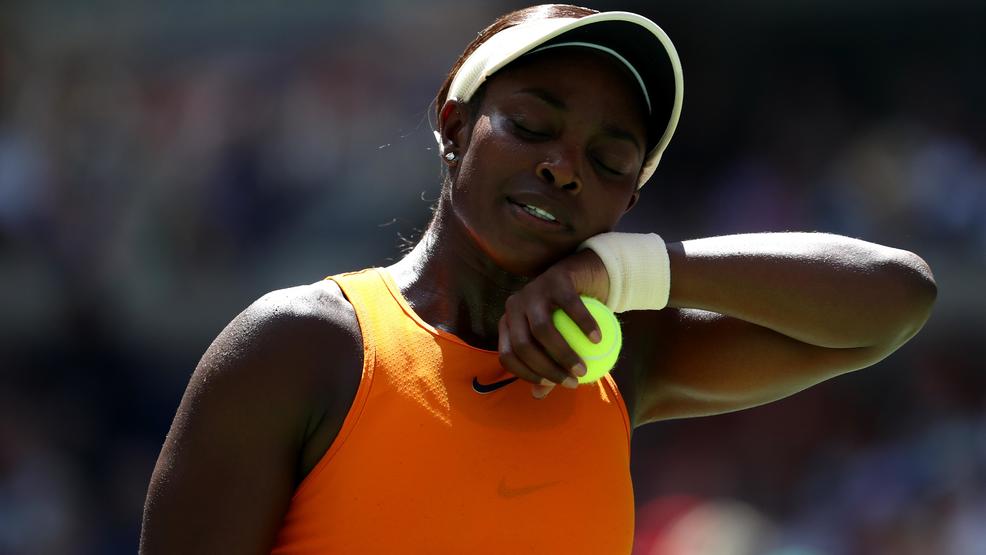 NEW YORK, NY - SEPTEMBER 04: Sloane Stephens of The United States reacts during the women's singles quarter-final match against Anastasija Sevastova of Latvia on Day Nine of the 2018 US Open at the USTA Billie Jean King National Tennis Center on September 4, 2018 in the Flushing neighborhood of the Queens borough of New York City. (Photo by Al Bello/Getty Images)

Joel Drucker: Sevastova Knew How to Make Stephens Uncomfortable in Upset at US Open

NEW YORK—Watch a defending Grand Slam champion struggle and out comes the microscope. What is going on? Why is she missing so much? Who is this vexing interloper?

It was so hot early this afternoon at the US Open that junior matches were postponed. Inside Arthur Ashe Stadium, barely a third full at noon, the on-court temperature was over 100 degrees, the exceptional humidity, windless conditions and subdued arena adding up to an oppressive, airless competitive environment.

These were the circumstances facing 2017 US Open champion Sloane Stephens as she walked on to the court to play her quarterfinal match versus 19th-seeded Anastasija Sevastova. These two had met at the same stage here a year ago, Stephens taking two hours and 28 minutes to squeak it out in a third-set tiebreaker.

But the one most in control of the climate was Sevastova, weaver today of a captivating spider’s web. Over the course of 84 minutes, Sevastova applied pressure to Stephens in ways subtle and disruptive to earn a 6-2, 6-3 win and reach her first Grand Slam semifinal.

“It's tough, like, to make points against her, but I had to be aggressive,” said Sevastova. “I had to try to come to the net, play some drop shots, move her, not let her play the game with her forehand, yeah, and make the winners.”

The nuance of Sevastova’s attack—and yes, she won today with offense—revealed itself very early. Should you try to hit with Stephens, you’d best bring a gun. Lacking such weaponry, Sevastova opted instead to often loft deep and high groundstrokes, driving the ball only when she had the chance to step inside the court and drive a backhand crosscourt for a jarring placement. Amid the excessive heat, this loft and pound combo lulled Stephens into frequent errors.

Said Stephens, “Mentally, physically, I just wasn't connecting. It just was a really tough day. The heat doesn't make it any more fun.”

But self-contained groundstrokes were only part of Sevastova’s platter, a series of adroit tactics that surfaced quite early. In the first set, Stephens served at 1-2, 15-40 and carved a fine 92-m.p.h. delivery wide. Sevastova, addressing the ball as if it were a Thanksgiving turkey, carved it crosscourt, similar to a shot you’ll see at the local park on a Sunday afternoon. It landed two feet past the net. Stephens, usually one to dart in and crack a forehand, attempted a drop shot that didn’t clear the net. In the next game, despite holding three break points, Stephens was unable to break back. Once up 4-2, Sevastova won eight of the next nine points, including a love break of Stephens at 2-5 that was capped off by a sharp crosscourt forehand winner.

WATCH—TC Live reacts to John Millman's win over Roger Federer at US Open:

The pattern was clear. With both her soft-hard crosscourt groundstrokes and a bevy of backhand down-the-line drop shots, Sevastova was the dictator, a role often more associated with power than touch and variety.

Meanwhile, Stephens searched for answers, but was never quite able to escape the landmines Sevastova had planted for her in various uncomfortable nooks.

As was the case in the first set, the game with Stephens serving at 1-2 proved pivotal. Showing the brand of balanced, mobile and patient tennis that won her the title here last year, Stephens began impressively. On the 14th shot of the first point, Sevastova feathered a drop shot. Stephens ran it down and torched a crosscourt forehand winner, a laser intended to tell Sevastova that the champion had arrived.

But Sevastova would have none of it. Reading Stephens shots with keen accuracy, maintaining solid balance all match long, Sevastova absorbed one Stephens salvo after another.

As Billie Jean King likes to say, “the ball tells me what to do.”

So what if Stephens ripped a forehand winner at 1-2, 15-40? Nobody on this day was going to get through this match with untouchable shots (do they ever?). At 30-40, Sevastova directed three straight balls to Stephens’ backhand. With each successive backhand, Stephens’ technique grew less proficient. On the third, she barely waved at the ball, flinging it wide.

As so often happens in a tennis match, the counterattack-tightness dynamic surfaced. Serving at 1-4, Stephens won 11 of 13 points. She was now serving at 3-4, 40-15. Level the set and who knows just how tight it could get for Sevastova? The stands, starting to fill up more, had come alive. And even Sevastova would concede that the weather was hardly fun for her.

“It's very humid, for sure,” she said. “For the hands it's not nice. You're always slippery hands. I don't like it. But it is what it is. It’s the weather in New York right now.”

But even as Stephens arrived at the brink of parity, Sevastova again took charge, approaching the net and snapping off a backhand volley winner. At 40-30, Stephens assembled a superb point, sending Sevastova into each corner with a pair of exquisite forehands. Failing to take advantage of either opening and come to net, Stephens lost that point with a long forehand. On the fourth deuce of the game, a Sevastova backhand drop shot elicited a netted forehand. Holding a break for 5-3, Sevastova closed out a 10-ball rally with yet another backhand drop shot—in this case, untouchable.

Even then, though, with Sevastova serving at 5-3, it wasn’t as if her serve made her the second coming of Pete Sampras. But by that stage, Stephens played as if she was thoroughly demoralized. Neither of her first two service returns cleared the net. At 30-love, Stephens netted a benign backhand. Match point number one was saved with a forehand winner. The second saw Sevastova tightly drive a down-the-line backhand wide.

Now what? At 40-30, Sevastova missed her first serve, spun in a 72-m.p.h. serve and kept enough balls in the court long enough for Stephens, on the 10th ball of rally, to hit a down-the-line shot into the net. Unquestionably, it had been a terrible day for Stephens. Credit Sevastova for making it so.