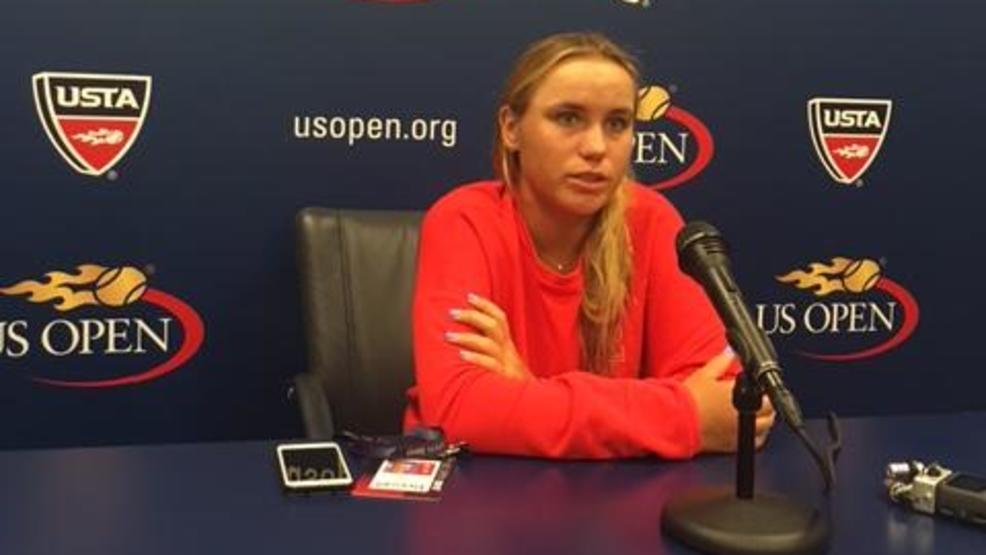 Oh, the angles we journalists seek. Ninety minutes had passed since eighteen-year-old American Sofia Kenin had beaten #32 seed Lauren Davis 7-5, 7-5. It was a prototypical day one story. Kenin had been the second-ranked junior in the world two years ago and in front a cozy crowd that nearly filled the 2,800 seats on Stadium 17, earned the first Grand Slam singles win of her career. For what it’s worth, the locale of her press conference had shuttled from the moderately small interview room two, to a much smaller table to, at last, a bigger spot, interview room three.

Kenin had been born in Moscow. And so, the angle emerged, a classic one about the juxtaposition of Russian and American values, the immigrant journey and so forth. But as Kenin sought to process the question, she could only stare – kindly – into space. She’d left Russia as a baby, not been back there since. Sporting a coral shirt and blue-painted fingernails, she looked much more like a Florida teenager than someone you’d expect to see with a sable on top of her head. It was reminiscent of the tale about the fish who was asked how he lived under water. Said the fish: What’s water?

But how could Kenin imagine anything else than what she’d occupied her whole life? Yes, she was that American teenager who says she unwinds by shopping. But she was also indeed that tenacious immigrant – or more pointedly, a child of immigrants who believes that her best asset has always been her ability to fight. Kenin was also industrious. At the age of five, she decided to create her own website. “It looks good to have one,” she said, conceding that it was out of date, no news having been posted since her run to the US Open junior finals two years ago.

Kenin’s opponent, Davis, was five years her elder and made her own share of news this year. In January, in Auckland, she’d won the first WTA singles title of her career. Ranked #62 at the end of ’16, by May she’d reached a career-high of #26. The 5’ 2” Davis had emerged as the latest rendition of that longstanding tale: The Great American Plugger. She was the player Melanie Oudin had never quite become, perhaps a more powerful version of Christina McHale, an elder to CiCi Bellis. Davis’ backhand was solid, her footwork disciplined.

A nervous Kenin went down 4-0 in the first set. But on court, Kenin is less giddy and more proud. She stands tall when serving, her posture erect from the baseline, primed to strike big off both sides. Davis grew more anxious through the first set, eventually serving six double-faults (Kenin served five). Serving at 5-6 in the first set, Davis missed two forehands.

The second was much more even throughout. Davis’ backhand remained solid, frequently jamming Kenin. But Kenin hung in, until at 4-all, she flagged a forehand long. The stands had not quite been filled for much of the match.

But now, as Davis served to send it into a third, more fans streamed in. Surely Davis, the veteran (all of 24 years old), would hold comfortably.

Not quite. The game began with a double fault, but soon enough, Davis reached 40-30, only to net a forehand off a fine Kenin return. Earning another set point, Davis this time missed a backhand. Kenin broke, held at 15 and again took Davis’ serve on her first match point.

For Davis, it was not just a bad day (48 unforced errors to Kenin’s 25), but a thud of a finale to horrible summer that had seen her lose six straight first round matches going back to Wimbledon.

For Kenin, it was deliverance. “It’s actually an amazing feeling,” she said. “I couldn’t be happier.”

Of course the desired angle loomed: What about that Russian-American connection? Kenin could barely fathom the question; though, unlike such prior Russian prodigies as Anna Kournikova, she exhibited zero signs of dismissiveness. But there, in a corner of the front row of the interview room, with camera in hand and just the slightest of smiles, sat her father, coach and website builder, Alex.

But for now, all his pride and joy wanted to do was plan a trip to Tiffany’s and take her father out for a nice dinner. But first, the website would have to be updated.