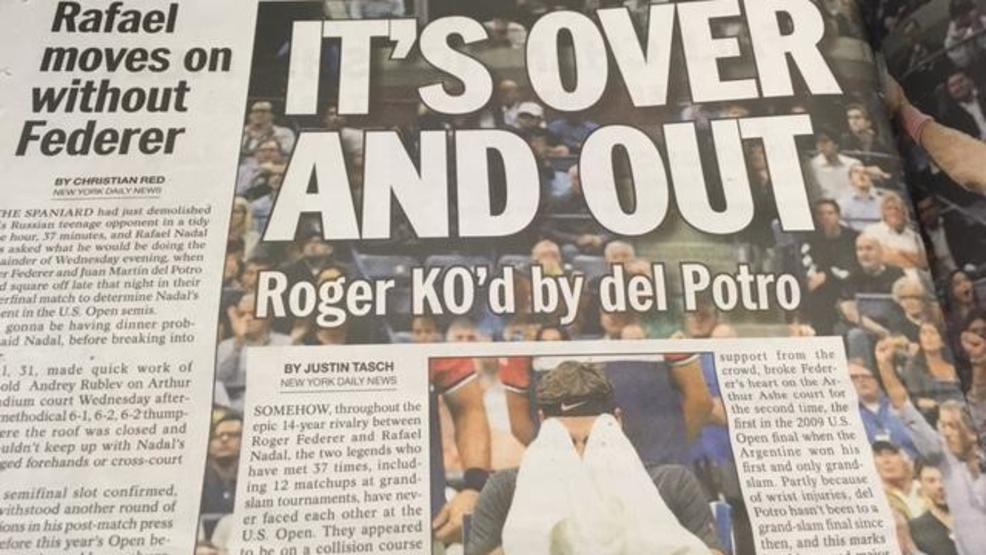 In a powerful and strange way, the affinity between a media outlet and its audience forms a glue of a certain flavor and color. Consider that glue a reflection of what the readers demand from the outlet and what the outlet thinks the readers are really feeling. Or at least the illusion of such.

And so, we bring you the headlines from two major New York newspapers in the wake of Roger Federer’s loss last night to Juan Martin del Potro.

From the Daily News:

“Left for Fed: Nadal does his part, but Roger flops vs. del Potro”

At one level these words convey humor. They are clever. It’s tough to resist saying “Roger and Out.”

But another tone is also present: the language of anger, of downright pleasure in seeing a favorite humbled, sobered, perhaps even kicked to the curb. To say someone “flops” or is “Left for Fed” – ouch.

I wonder why this method of communicating news is so prevalent in these outlets. Is it necessary for an athlete to be treated as either prince or pauper? Do readers really rejoice when one suffers a defeat? Are headline writers closet sadists?

Then there is the stately New York Times: “Del Potro Shuts Down Hopes of a Showdown.” My, how sensible. True, and I will guarantee that the story will be more insightful than those in the other papers.

Now I must confess that those tabloid headlines really are more fun. There is a vividness to them, a visceral, grabby quality that triggers an emotion.

So perhaps way tennis can be experienced as emotional and rational, from the megaphone-like headlines of the tabloids to the subdued and informed prose of the newspaper that for more than 100 years has been the first and last word.

So pardon me. The king is dead. Long live the king. Or, del Potro delivers. Maybe in my next life I’ll be an angry headline writer.