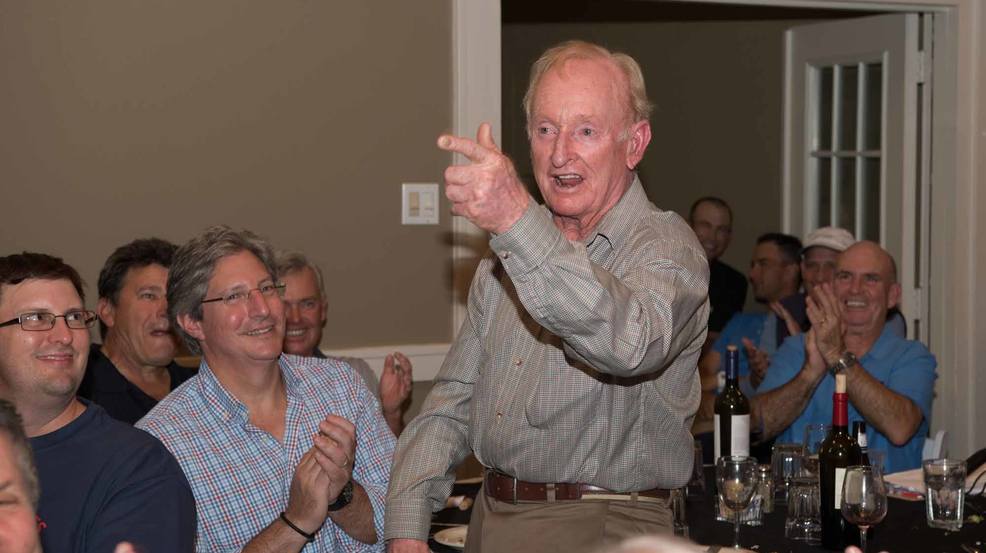 Joel Drucker: How the Rocket Soars - Rod Laver Among the Players

Less than a month earlier, inside an arena in Prague, clad in a crisp blazer and tie, Rod Laver had sat courtside to watch the likes of Roger Federer, Rafael Nadal, Nick Kyrgios and Sam Querrey play the Laver Cup. There had been drama and shot-making, the players sparked to life even more both by the presence of the remarkable Australian legend and the rarity of a team event.

Now, 5,500 miles from Prague, the 79-year-old Laver was in New Braunfels, Texas at the John Newcombe Tennis Ranch for another tennis event. Here too, he would witness drama and shot-making, also in the setting of a rare team tennis-style competition. In this case, it was outdoors. By 10:30 a.m., the temperature was north of 80 degrees. Instead of a seat, Laver stood behind a fence.

All of the players he watched were of the recreational variety. There were men over 60, NTRP 3.5-4.0 players who’d likely never played a match in front of more than ten of their peers. There were a few more experienced, a sprinkling of NTRP 4.5s in their 50s and 60s, some of whom had played college tennis. And also the occasional 5.0-5.5, youthful men in the 25-45 range.

In this instance, Laver was a captain at Tennis Fantasies with John Newcombe and the Legends, an annual, weeklong fantasy camp that this year took place for the 30th time. Laver shared his captain duties with three ex-pros – a pair of Aussies mates, Owen Davidson and Ross Case, as well as Luke Jensen. The four of them that morning paced the ranch’s courts to watch their 28 players compete in a range of singles and doubles matches. In this case, the opposing team was a squad led by Laver’s lifelong mate, Roy Emerson, as well as ex-pros Marty Riessen, Danie Visser and Peter Tramacchi.

Tennis Fantasies had happened 26 times. The event had become its own special community, strongly flavored by the values that had made Australians a tennis power – competition and camaraderie, not necessarily in that order. During that first-quarter century, one question persisted: Where’s Laver? And then, beginning in 2014, the Rocket had arrived. It was as if Dylan had at last come to a grand rock festival; the legend at Woodstock.

And so, on this Wednesday morning, the second day of the event’s competitive phase, Laver’s fingers gripped a fence to watch two men in their 50s do something that Laver had done arguably better than anyone who’d ever walked the earth.

The night before, he’d told the tale of how he’d made his way from rural Australia to Wimbledon. Imagine a small farm located in Queensland, Australia. Picture the distance merely to get to the Australian city of Brisbane – an eight-hour drive along a dirt road. Ponder that Brisbane is more than 10,000 miles from London, a diagonal line that starts below the equator and covers the length of the Eastern Hemisphere. Said Laver, “I was fishing and spending time on the Barrier Reef, and there I heard about Wimbledon on the radio.”

Meanwhile, back home, he vied for court time on the family’s ant-bed court, young Rod keen to show his older brothers Bob and Trevor that he too could play. As Laver recalled when he first met his eventual coach, Charlie Hollis, “All I was then was a nine-year-old little kid. Who had any idea if I could be any good? All you did was just hit one tennis ball after another.”

Soon enough, the grand leader of Australian tennis, Harry Hopman, would recognize the lefty lad’s ball-striking skills. But he wasn’t impressed with Laver’s lackluster movement. As a kindly and motivational joke, Hopman nicknamed Laver, “Rocket.” Of course, as the world would later see, the Rocket would soar.

The two campers Laver watched would finish their match with a tiebreaker. Laver took it in from behind the court. The player he had coached, a fellow Aussie, had been the loser. “Bad luck,” said Laver to his charge. To the winner: “Nice job closing it out.” Off now Laver went to see another match.

By afternoon, he sat in a lawn chair behind Court 5 at the ranch. Four campers were engaged in doubles. Volleys flew left and right. “Hey, that’s pretty good,” said Laver. Then a double-fault. “Those can happen too,” he said.

There would be hours and hours of talk, of campers with questions, cameras, memorabilia to be signed. Various legends such as Davidson and Emerson, Newcombe and Stolle each recalled time with Laver – most notably the remarkable and pleasing disparity between the gracious gent off the court (Clark Kent?) and the genius shotmaker (Superman?) on the court. Said Newcombe, “It’s tempting to play it safe when it got tight. Rod did just the opposite.”

But Laver points out that those great shots he often hit – mind-boggling angles, scintillating spins – were not result of inspired genius, but of extensive work. Laver once estimated that every shot he ever hit in a match was one he’d practiced hundreds of times.

In his 1975 book, “Portrait in Motion,” Arthur Ashe wrote about Laver and his mates: “As egalitarian as the Aussies, however, they take monarchist pride in their champion. They show no jealousy toward him and more anxious to build him up than to watch him fall from his perch.”

Said Davidson, “The amazing thing is that no matter what happens, Rod is always incredibly humble. That’s just who he is.”

Asked to juxtapose his days at the Laver Cup with Tennis Fantasies, Laver scarcely hesitated. Said the Rocket, “tennis is tennis.”