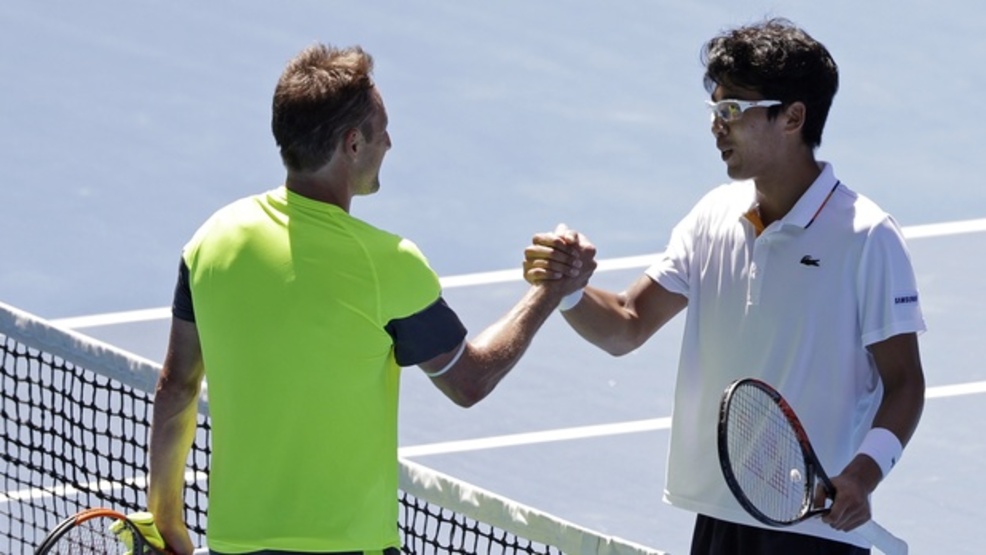 Joel Drucker: Hyeon Chung Showed It All, While Tennys Sandgren Said All He Wanted

MELBOURNE—Hyeon Chung continued his incredible run through the Australian Open, at 21 years old becoming the first Korean to reach the semifinals of a Grand Slam tournament, courtesy of a 6-4, 7-6 (5), 6-3 win over another Australian Open Cinderella, Tennys Sandgren.

This major tournament bills itself as the Grand Slam of Asia Pacific. When asked if the Australian Open was the Slam he dreamed of most as a child, the 58th-ranked Chung concurred, citing the final that happened here a decade ago between Novak Djokovic and Jo-Wilfried Tsonga. Djokovic rapidly became Chung’s hero.

Like Djokovic, Chung’s genius is understated, less about dazzling shots and more contained in his efficient, sustainable craftsmanship. His backhand is impeccable, a pruned drive that penetrates with sustained depth, both down the line and crosscourt.

And like Djokovic, Chung has a knack for cumulative oppression, which bore itself out in the most important data point of the match: Sandgren’s 43 forced and 43 unforced errors.

Said Sandgren, who lost a three-setter to Chung in Auckland earlier this month, “He kind of forces you, I mean me, to kind of play on this edge where you're kind of doing some really cool things, and then you can fall off it and make some mistakes because he's forcing you to play so well.”

In the first set, Chung broke Sandgren at 1-all. Serving for the first set at 5-4, Chung was cool as a cucumber, holding at love.

Then came Sandgren’s counterattack. If nowhere near as precise in his technique as Chung, Sandgren never stopped competing during this match. In the second set, Sandgren would strike 19 winners, one more than he’d hit in the other two sets combined.

Sandgren’s backhand, at times an awkward flip, at others a lashing drive, created its share of openings. The forehand, often incredibly herky-jerky, can blast its way into a corner or fly long. But in time, Sandgren earned the chance to serve for the second set at 5-3, only to lose it in a deuce game.

The ensuing tiebreaker was the pivot point. Sandgren’s best chance came with Chung serving at 4-5. Sandgren thoroughly controlled a rally, but then netted a facile forehand. Another forehand error gave Chung a set point, which he in turn cashed. Clearly, Chung’s superior movement—balance, recovery and sheer court coverage—put the squeeze on Sandgren.

In the third set, Chung repeated his first set pattern, breaking Sandgren early, this time at 1-2. Games went swiftly. Sandgren fought off a match point at 2-5. Chung easily reached 40-love. The man nicknamed “The Professor” because he wears glasses was one point away from becoming the first Korean to reach a Grand Slam singles semifinal.

But on this occasion, Chung’s methodical qualities vanished, a trio of errors leveling the game. Chung even faced a pair of break points, extricating out of one in the wake of a 31-shot rally punctuated by he and Sandgren turning the clock back to 1973 with an endless exchange of slice backhands. At last, on his sixth match point, Chung closed it out:

It had been an incredible Australian Open for both players. Sandgren, ranked No. 97, had previously lost in the qualifying here five times. His play, highlighted by wins over 2014 champ Stan Wawrinka and fifth-seeded Dominic Thiem, will net him $352,000 and take his rank into the 50s.

Sandgren, also, of course, has been involved in a controversy regarding his Twitter account this week. He tried to quash that by opening today’s post-match press conference with the following statement:

You seek to put people in these little boxes so that you can order the world in your already assumed preconceived ideas. You strip away any individuality for the sake of demonizing by way of the collective.

With a handful of follows and some likes on Twitter, my fate has been sealed in your minds. To write an edgy story, to create sensationalist coverage, there are a few lengths you wouldn't go to to mark me as the man you desperately want me to be.

You would rather perpetuate propaganda machines instead of researching information from a host of angles and perspectives while being willing to learn, change, and grow. You dehumanize with pen and paper and turn neighbor against neighbor. In so doing, you may actually find you're hastening the hell you wish to avoid, the hell we all wish to avoid.

It is my firm belief that the highest value must be placed on the virtue of each individual, regardless of gender, race, religion or sexual orientation. It's my job to continue on this journey with the goal of becoming the best me I can and to embody the love Christ has for me, for I answer to Him and Him alone.

I'll take questions about the match, if you guys don't mind. Thank you.

Asked what he planned to do next, Sandgren returned to the prevailing theme:

“I’m going to go home and enjoy time with my family, turn off my phone, you know, just really reflect on the last two weeks, reflect where my life has gone to, where I'm at, where I am in this stage at 26, who I am as a person, who I want to continue trying to be, where I want to go in the sport, where I want to go as a man.”

As for what Chung will do net, there's the semifinals, a stage that will take him into the Top 30. In his country, of course, it will take him even higher. The opportunities figure to come from many directions—exhibitions, appearance fees, endorsements, political-cultural activities. Managing this will not be easy—just ask Jerzy Janowicz, the 2013 Wimbledon semifinalist now ranked No. 121.

But Chung currently seems quite grounded. Leo Baek, a journalist from TennisKorea I spoke with following the match, told me that Chung is exceptionally kind in his dealings with people. Inside the lines, though, Chung and his racquet have been considerably vicious.