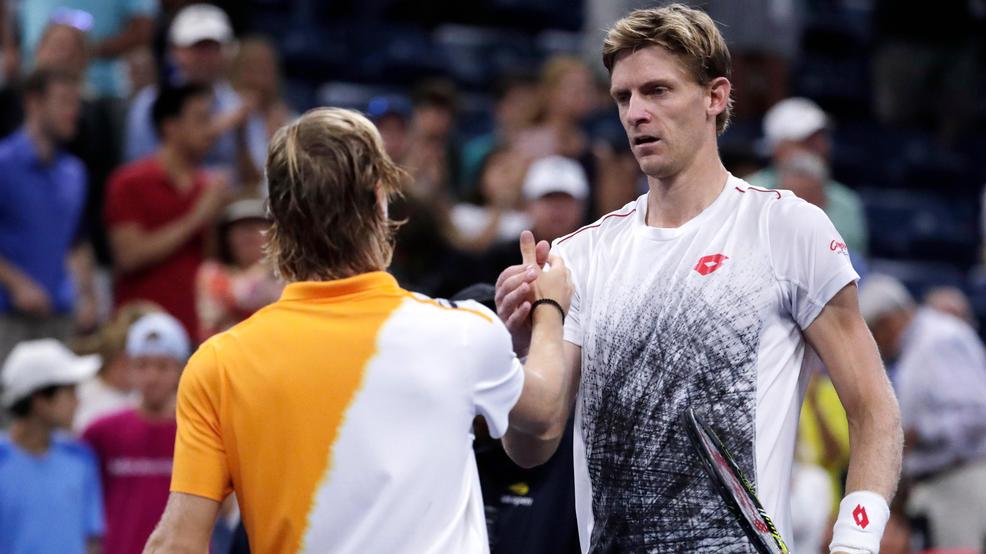 NEW YORK—Kevin Anderson is a rather low-key, soft spoken, unassuming fellow. But the tranquil nature of Anderson’s persona belies the extensive drama he has brought to majors of late.

Recall Wimbledon, where victories over Roger Federer and John Isner each went deep into the fifth set. On Friday night, it happened in New York. In three hours and 43 minutes, Anderson problem-solved and eventually powered his way past one of contemporary tennis’ unbridled young colts, 19-year-old Denis Shapovalov, 4-6, 6-3, 6-4, 4-6, 6-4.

The match took place on the new Louis Armstrong Stadium. In many ways, there an energy coursing through this court evocative of the old Grandstand court in its 1978-‘96 period—intimate, raucous, fans in movement and in dialogue. But this facility is even bigger and louder. The new Armstrong conjures up the sound and texture of New York City. The volume increased even more at approximately 4:25 when a few drops of rain triggered the need to close the roof for the first time. Play resumed within ten minutes.

Anderson at that point was serving at 4-2, 15-love. In the first set, he’d been broken at 1-2, dropping that game with a pair of unforced backhand errors. Shapovalov, a supreme opportunist, consolidated the break with a love hold and rode a wave of confidence—11 winners to just three for Anderson—to take the first set, 6-4.

But as Federer and Isner learned at Wimbledon, there is a sturdy quality to Anderson. He is a grinder in a big man’s body, a player who at this point has internalized the idea that a match is less a series of bold statements and more a matter of sustained mechanics. It also helps that at 6’ 8” he can drop down many a tremendous serve (67 in this match were unreturnable, compared to 43 for Shapovalov).

In contrast, Shapovalov at this point is a delightful mystery. There is little ordinary about the way he aggregates points. In a sport largely given to repetition, consistency and the brand of forceful defense that pervades contemporary tennis, Shapovalov is a rebel, an independent voice of a shot-maker who lives for the chance to slice his serve wide in the ad court, roll his one-handed backhand crosscourt, crack his topspin forehand up the line and opportunistically make his way to the net for angled volleys.

“I just feel like I belong out there this year. I'm able to compete with anyone out there, as I showed today," he said. "I feel like my game's at a different level.”

All told, Shapovalov hit 59 winners, nearly twice as many as Anderson’s 31. But if the direction, consistency and even sustainability of this young Canadian’s shots are uncertain at this point, what’s guaranteed is his zest for competition. There was little chance he would shrivel once Anderson went up two sets to one.

Said Shapovalov, “Another crazy match for me . . . Obviously a lot of ups and downs. It was a battle out there. I gave it all I had. Nothing to regret from it.”

So it was that with Anderson serving at 4-5, 15-30, Shapovalov earned a pair of set points with an enthralling lob and backhand drop volley. Though he’d lose both of those opportunities, Shapovalov so electrified the crowd that he was able to dislodge Anderson from his comfort zone just long enough to snap up the next two points and level the match.

“Felt like in a coliseum almost,” Anderson said. “The crowd was really into it, especially as the match went on. It was really exciting playing in those sort of conditions. Definitely a treat being out there today.”

Serving in the fifth at 1-all, 30-30, Shapovalov netted a backhand and a forehand to surrender the conclusive break to Anderson. And yet, even as Anderson continued to hold, everything about this match–the energy, the rain, the closed roof, the style contrast of youth and age, lefty and righty—spun the dial in the direction of suspense.

Sure enough, at 3-5, love-40, Shapovalov fought off three match points, including one with an ace and another with a crisp backhand volley winner. He also repelled a fourth. For all his makes and misses, Shapovalov well knew this tennis principle: Make the guy serve for it.

But nothing now could faze Anderson. On the first three points, each of his serves was north of 130 mph, the third a 133 mph ace down the T. A second serve on match point No. 5 also never came back, Shapovalov shanking his backhand.

Experience had narrowly carried the day over youth.

“Maybe that helped me in certain moments,” Anderson said. “But I had to definitely use all of it to get through today.”