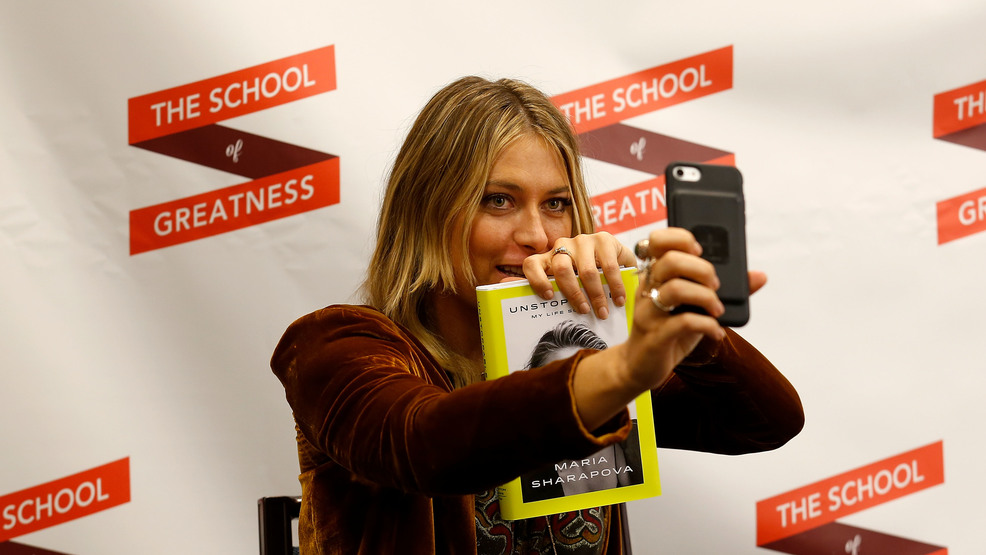 Book Review
"Unstoppable: My Life So Far"
By Maria Sharapova with Rich Cohen

Likely, it will never be the easy way for Maria Sharapova. She had been conceived in the wake and shadow of a nuclear disaster, the 1986 Chernobyl meltdown. She had come to America as a child, driven by her father Yuri to become a tennis champion. It was the immigrant story par excellence, of struggles for money and one rough and tumble victory after another, hard-edged triumphs earned against opponents who Sharapova decided from the get-go to never treat as friends (then again, they’d hardly welcomed her).

Yet as an adult, Sharapova so hungered for something more regal. As Sharapova conceived her autobiography, she writes that, “I knew the end was near and I wanted to go out in the perfect way. I’d take one last turn around the circuit, from the Australian Open, to the French Open, to Wimbledon. A kind of victory tour. I’d love the people and the people would love me. It would end at the U.S. Open, which I’d play just as this book hit the stores. Maybe I’d even make it to the final. Maybe Serena would be there, too.”

At least that’s how Sharapova says she envisioned it. Was it true that she wanted 2017 to be her last as a pro, that the year she turned 30 would mark the end of her career? Viewed in retrospect, that stated desire seems so scripted, eerily calculated, perhaps even questionable, a form of artifice at odds with the authentic and unruly reality that has marked Sharapova’s career and also made her one of the most-accomplished players of the last 15 years.

For make no mistake: To read Sharapova’s book is to track the journey of a remarkable athlete who is one of the greatest competitors in tennis history. In 2012, Sharapova became only the tenth woman in tennis history to have won the singles titles at all four majors. That this happened at Roland Garros – on the clay where Sharapova once called herself “a cow on ice” – revealed the blend of Hollywood glitter and Russian-born grit that has marked her life. As a player, Sharapova is a master of the intangibles. Her strong work ethic, extraordinary tenacity and sheer confidence are far greater assets than any single stroke she possesses. This is a woman who has repeatedly willed herself to victory.

Sharapova’s persistence makes her admirable and, at least from my vantage point, quite likeable. One of my favorite Sharapova moments came once in Australia. Late in the third set of a tough match, on a day when the temperature had soared into triple digits, Sharapova received what she thought was a bad call. Looking to the umpire, she said, “You’ve got to be (expletive deleted) kidding me.” Raw and real, light years removed from a photo session.

Aided by veteran writer Rich Cohen, Sharapova tells her tale quite fluently. At the start, heavily flavoring Sharapova’s sensibility, there is Yuri. Writes Sharapova, “The tennis parent is the will of the player before the player has formed a will of her own.”

Enter the Dickens-like moments, at once fortuitous, evocative, downright cinematic. There is the escape from Chernoybl. There is the random chance for Yuri to discover tennis. At six, already skilled and driven, Sharapova draws the attention of Martina Navratilova, who tells Yuri that if the girl is to thrive she must leave Russia. Off to America, where fortunate encounters help Sharapova earn a scholarship at the IMG Bollettieri Tennis Academy. Before Maria is even a teenager, she is signed to a contract by management firm IMG and given thousands of dollars to continue pursuing the tennis dream. There comes further refinement in California, under the guidance of famed tough love instructor Robert Lansdorp. As the opportunities came, Sharapova grabbed them by the throat.

And so, by 14, young Maria had become one seasoned hombre. In the finals of the 2002 Australian Open juniors, as she lost to a craftier opponent, she heard Yuri scream in Russian, “Do you know what you’re losing? You’re losing a fifty-thousand-dollar Nike bonus!” Writes Sharapova, “It was the first time I had ever heard my father speak about earnings.” Well, at least overtly. Such is the case of this money-rich Open era that one always wonders what truly is the motivation for a parent to get his child into tennis. It’s hard to imagine Yuri seeing anything other than dollar signs. Fair enough.

The Nike bonuses arrived soon enough. Less than three years after that match, Sharapova won Wimbledon, hitting the global cultural radar screen and, so she now claims, inspiring the rationale for this book to exist. “I seemed to have come out of nowhere,” Sharapova recently told the New York Times. “When the questions started pouring in about how I got there, when I began telling the story of what brought me to that moment of victory, no one believed it . . . I would tell journalists these stories, but no one really believed them, because it was such a crazy tale. So I decided to write about it.”

Must Sharapova create this schism between her and others who have closely watched and enjoyed her tennis for 15 years? Who ever claimed not to believe her? But alas, posing a conflict fits in with the desired fable: Yuri and Maria against the world. Fine, sure, let that be the narrative prior to her Wimbledon victory. It’s interesting to note that of this book’s 289 pages, 191 cover the period through Sharapova’s ‘04 Wimbledon win.

But since that Wimbledon win, the world has been Sharapova’s oyster, her tennis earning her considerable wealth and fame – even as various injuries have often made her on-court campaigns a persistent struggle of injury, exile and return.

In case you’re wondering, Sharapova rarely bristles in public and can actually be quite charming. Just don’t expect to hear her delve too deeply into the art and craft of tennis beyond the need to fight and strike big on key points. In the book, for example, Sharapova offers her analysis of the playing style of major rival Justine Henin (Sharapova won three of their ten matches – but two of those wins came at Slams). Writes Sharapova, “I always keep my philosophy basic: I do not have to be the best player in the world to be the best player in the world. I just have to be a little better than the other player on that particular day. Henin’s philosophy is seemingly simpler still: If I just hit the ball at her one more time than she hits the ball at me, I win, which can make for a long, grueling match.” To compare the multi-layered game of a Henin to little more than a backboard or ball machine reveals a rather limited tennis education.

And as is usually the case with tennis’ multi-Slam champions, Sharapova is perpetually on a carefully controlled timetable, her time for interviews and appearances managed with the minute-to-minute precision of a military campaign. But once committed to conversation, Sharapova is mostly gracious, surprisingly candid, appropriately self-deprecating, and even, believe it or not, a bit of a geek, demonstrated over the years by talk of such matters as cooking, reading and stamp collecting.

Mostly, but not always. During Sharapova’s victory over Henin at the ’06 US Open – her credibility-building second Grand Slam singles title – it was quite clear that she was being illegally coached, Sharapova’s entourage signaling her to eat a banana. At her post-match press conference, Sharapova’s frequent grace gave way to the bully. “Let’s make this a positive session tonight please, por favor,” were Sharapova’s opening words. There followed several rancorous interactions. “You know, honestly I believe at the end of the day, personally, my life is not about a banana,” said Sharapova. As Sharapova explains in her book, Yuri “did sit in the stands, giving me signals . . . But he wasn’t coaching from the stands, not at all. He was giving me reminders.” As Bill Clinton might have said, it depends on your definition of coaching.

On the other hand, Sharapova traveled the ethical high road in early 2016 when she rapidly went public with the news that she had tested positive for a drug that had been on the banned list for less than a month. At the start of this travail, Sharapova showcased exemplary candor and accountability. As the case went on, she also demonstrated trademark tenacity and, now, in retrospective, fury that curdled towards paranoia. “I screwed up,” writes Sharapova. “I didn’t do enough to check the revised prohibited list. But they screwed up, too. They should’ve been much clearer about the changes to that list . . . Why not let me know what was happening? It seemed like a setup, a trap. Not a day went by when I did not wonder if someone was trying to do me in.”

All that accompanied Sharapova’s failed drug test – confession, trial, return – has changed the flavor of her autobiography from a tale of glorious triumph to one of the pursuit of redemption, spiced with retribution. As Sharapova concludes the book, “Before all this happened I was thinking only about the finish line. How it would end, how I would make my exit. But I don’t think about that anymore. Now I think only about playing. As long as I can. As hard as I can. Until they take down the nets. Until they burn my rackets. Until they stop me. And I want to see them try.”

As Sharapova has begun her comeback, my view has always been that she should be given as many wild cards as she wants. Do the crime, do the time. Let this champion come back and compete. But really, does Sharapova truly think anyone now wants to set her frames on fire? The hard way it was. The hard way it will be.