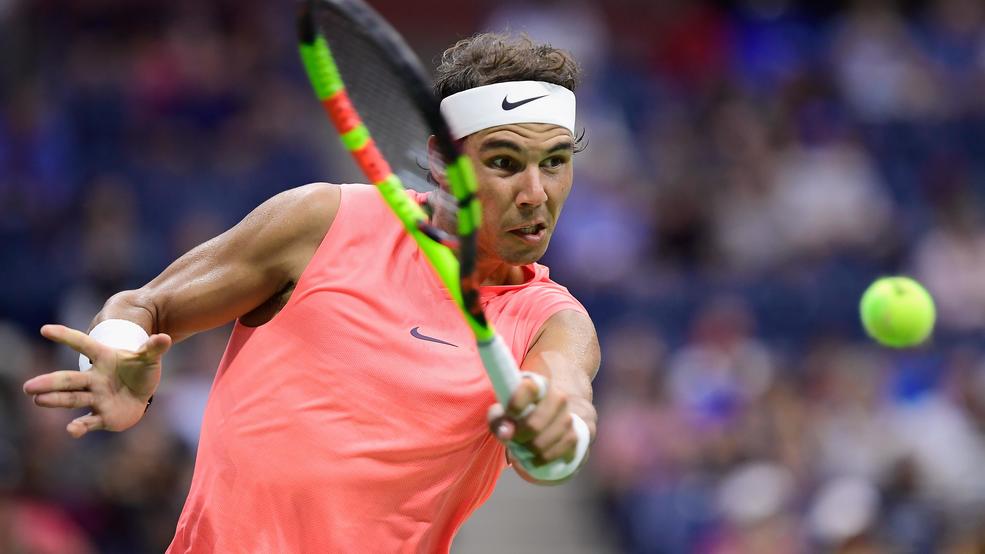 NEW YORK, NY - AUGUST 31: Rafael Nadal of Spain returns the ball during his men's singles third round match against Karen Khachanov of Russia on Day Five of the 2018 US Open at the USTA Billie Jean King National Tennis Center on August 31, 2018 in the Flushing neighborhood of the Queens borough of New York City. (Photo by Steven Ryan/Getty Images)

NEW YORK—When Nikoloz Basilashvili walked on to Arthur Ashe Stadium to play Rafael Nadal in the round of 16 today at the US Open, it appeared that he faced an untenable pair of choices. The only time this 26-year-old man from Tbilisi, Georgia had played Nadal had come last year in the third round of Roland Garros. Nadal had won, more than handily, 6-0, 6-1, 6-0.

So what was Basilashvili to do? One option called for him to try and hit winners, a virtually impossible task versus a player as mobile and skilled as Nadal. But the second path—sheer steadiness—was even less viable.

In the previous round, Nadal had been profoundly tested by 27th-seeded Karen Khachanov, taking four hours and 23 minutes to win that match, 5-7, 7-5, 7-6 (7), 7-6 (3). But while Khachanov demonstrated concussive firepower throughout, Basilashvili is far more of a slasher, subject to ups and downs.

While the Khachanov match had been on the scale of a rigorous final exam, the first two sets of Nadal-Basilashvili suggested a simple fill in the blanks test, of one man’s consistency toppling another’s streakiness. In the end, though, it turned out to be a demanding pop quiz, Nadal taking three hours and 19 minutes to subdue the surprising and captivating Basilashvili, 6-3, 6-3, 6-7 (8), 6-4.

Though playing in the round of 16 at a major for the first time, Basilashvili showed no nerves as the match got underway. But serving at 3-4, 30-40, he fell prey to Nadal’s form of genius: a great retrieval and a backhand lob that helped Nadal reset the point and eventually elicit in error. In the manner of such great champions as Pete Sampras and Roger Federer, that was all Nadal needed to break open the match. At 5-3, Nadal served out the set at 15 and then started the second by breaking Basilashvili at 15. He went on to take the second set 6-3.

Serving in the third at 0-1, love-40, Basilashvili fought off five break points to level that set and then broke Nadal to go up 2-1. Naturally, Nadal broke back immediately.

But over the course of the third set, Basilashvili began to transcend the two horrible choices he’d faced at the start. The pace picked up considerably, as Basilashvili pushed Nadal into severely defensive positions and lashed deep and angled drives off both sides. It was a jarring sight.

In some cases, players disrupt their opponents with doubt. Not Nadal. His disruption comes in the form of knowledge: Here it comes, deal with it. As much as Nadal has improved his serve to the forehand, everyone on the planet knows that on a big point in the ad court, Nadal’s go-to sequence is a breaking slice to the backhand, followed by a down-the-line forehand. This happened several times to Basilashvili. It was one thing yesterday for Nick Kyrgios to be awestruck by Roger Federer’s eclectic rainbow. As Basilashvili saw repeatedly, there is something even more debilitating about knowing what’s about to happen to you and then being helpless to prevent it.

But with Nadal serving at 3-1 in the third-set tiebreaker, keen to close out a 16-ball rally, the Spaniard lined up a forehand down-the-line mid-rally and was just wide with it. Then, down 4-5, Basilashvili played a sublime point, capped off by a crosscourt forehand drop shot and a scorching backhand passing shot. Serving at 7-6, he approached sharply to Nadal’s backhand and then knifed a backhand volley winner. The first two sets had lasted 73 minutes—the Basilashvili tutorial? The third had been 75 minutes long. The student had learned much.

The combination of a jolted Nadal and an empowered underdog added much spice to the start of the fourth set. And even though Nadal broke Basilashvili’s serve in the opening game, the atmosphere by that stage was vastly different. Basilashvili had found the groove, transformed from mouse to dragon. Having hit only 19 winners in the first two sets, he cracked 23 in the third, 14 in the fourth. Even as Nadal methodically continued to hold serve, the threat remained that Basilashvili could catch blow smoke.

“He was always able to come back,” said Nadal.

Unable to finish at this exact stage versus Khachanov on Friday, today Nadal reached 40-love and then went with Lefty Play 101: a wide slice, which turned out to be a 106-M.P.H. ace.