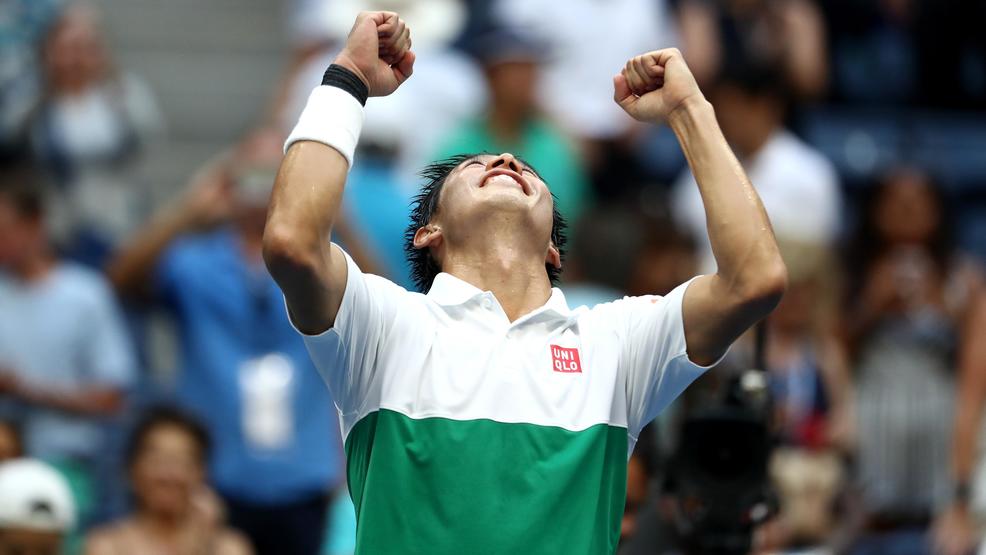 NEW YORK, NY - SEPTEMBER 05: Kei Nishikori of Japan celebrates match point during his men's singles quarter-final match against Marin Cilic of Croatia on Day Ten of the 2018 US Open at the USTA Billie Jean King National Tennis Center on September 5, 2018 in the Flushing neighborhood of the Queens borough of New York City. (Photo by Al Bello/Getty Images)

Joel Drucker: Nishikori Assembles a Five-Set Win over Cilic in US Open Quarterfinals

NEW YORK—The way tennis player logic works is that you apply the data in your favor. Headed into their afternoon US Open quarterfinal, seventh-seeded Marin Cilic and 21st-seeded Kei Nishikori had played one another 14 times. Nishikori drew strength from knowing that he’d won eight of them, including the most recent, a three-setter in the quarterfinals of Monte Carlo earlier this year. But one of Cilic’s half-dozen wins had been monumental, a straight-set route of Nishikori in the 2014 US Open final. How many victories would you trade for one in the finals of a major?

Over the course of four hours and eight minutes, with enough momentum shifts to please a basketball fan, punctuated by patches of brilliance and tightness, Nishikori earned a 2-6, 6-4, 7-6 (5), 4-6, 6-4 victory that ended just past 6:00 p.m. Absent from New York last year with a wrist injury, compelled to play a pair of Challenger tournaments to start his 2018 campaign, this was surely a sweetly redemptive win for the 28-year-old Nishikori.

“It was really tough,” he said in his on-court post-match interview. “I try to fight every point.”

With the temperature in the 90s and high humidity, the heat rule was in effect again, creating the kind of thick, sticky conditions that had frequently left players and fans feeling imprisoned. But early on, Cilic played the role of jail-keeper. Breaking Nishikori at 1-2 in the first set, Cilic was dictating play forcefully, as always with his stronger backhand, but also with his streaky forehand. Nishikori served at 2-5 and at 30-40 meagerly lined a backhand into the net. Thirty-five minutes in, Cilic was every bit in control as he’d been throughout the ’14 final.

At one level, these two have marked style differences. At 6’ 6”, Cilic can frequently take charge of a point with his serve in ways uncommon to the 5’ 10” Nishikori. But once rallies get started, the two are quite similar, each a fine practitioner of contemporary grind-and-find tennis, be it with a slick and trusty two-handed backhand or tennis’ true emotional barometer, the forehand.

Serving in the second set at 2-3, 30-40, Nishikori struck a forehand long. One hour into the match and it had been all Cilic. But it would be grossly inaccurate to say that at this point, Nishikori arrived. Up a set and 4-2, Cilic departed, spraying three unforced errors off his forehand to drop serve. From there, Nishikori didn’t so much sprint as amalgamate. Serving at 4-all, 30-15, Cilic committed a tennis hat trick: one unforced error off the forehand, another off the backhand, a double-fault. At last in an advantageous position, Nishikori continued to probe Cilic’s by-now extremely tight forehand to reach set point at 40-30. A penetrating backhand elicited a Cilic error.

WATCH—Tennis Channel reacts to Rafael Nadal v. Dominic Thiem at the US Open:

Nishikori’s momentum continued as the third got underway. He broke Cilic immediately and survived a six-deuce serving game to go up 4-2. But with Nishikori serving at 4-3, Cilic at last relaxed and rediscovered his forehand, using it skillfully to break at love. Soon it was 6-all.

It is an amazing facet of tennis that no matter what the skill level, a tennis match can boil down to this child-like rhyme: nerves and serves. Such was the case in the tiebreaker. Cilic served at 1-3, leveled it at 3-all, served at 4-3—and then struck two double-faults. With Nishikori serving at 5-4, a superb Cilic backhand let him take command of the point. But at 5-all, Cilic struck a backhand return long. On Nishikori’s set point, Cilic struck a nervous 82-m.p.h. second serve. Nishikori pounced on it, smoothly cracking a backhand return down the line for a winner.

Though Nishikori led, everything from the weather to the way he and Cilic had conducted so many rallies, to their respective anxious periods, gave off little indication of an impending race to the finish. Sure enough, with Nishikori serving at 3-3, Cilic broke him at 15, the last point, fittingly, a shanked Nishikori forehand. A five-setter it would be, Cilic closing out the fourth, 6-4.

Spicing up the decider was that each of these two had superb five-set records, Cilic at 29-14, Nishikori 17-6. But as the fifth began, perhaps the accrued scar tissue of recent days had worn on Cilic. His last two matches had been against Nishikori-like grinders, a deceptively tight 7-6 (6), 6-2, 6-4 win versus 10th-seeded David Goffin and an epic over Alex De Minaur that he’d won 7-5 in the fifth after losing the first to sets.

In contrast, Nishikori had dropped just one set in his prior four matches and even been the benefactor of a second-set retirement from a potentially challenging opponent, Gael Monfils. He broke Cilic at 1-2 and went up 4-1. But despite holding game points in each of the next two games—one to go up 5-1, another pair when serving at 4-2, 40-15—Nishikori was soon broken. Cilic held for 4-all. For the second day in a row, would Ashe Stadium be the scene of a fifth-set tiebreaker?

Brick by brick, Nishikori won the 4-all game at 15. All through the fifth, he and Cilic had gathered points less with brilliance and more with delicacy. They’d each covered the court superbly, occasionally cracked a winner, poked and probed at one another in the quest to elicit errors. With Cilic now one game from elimination, serves and nerves would surely tell the tale. Which player’s forehand would hold up?

That 4-5 game featured four unforced forehand errors. But three of them came from Cilic, including, at 15-30, an oddly informed decision to go for an inside-in winner that flew wide. On match point, the ever-alert Nishikori pounced on a wide Cilic serve and scorched a crosscourt return winner. It was stunning: a long afternoon struggle in heavy conditions, ended with a lightning bolt.