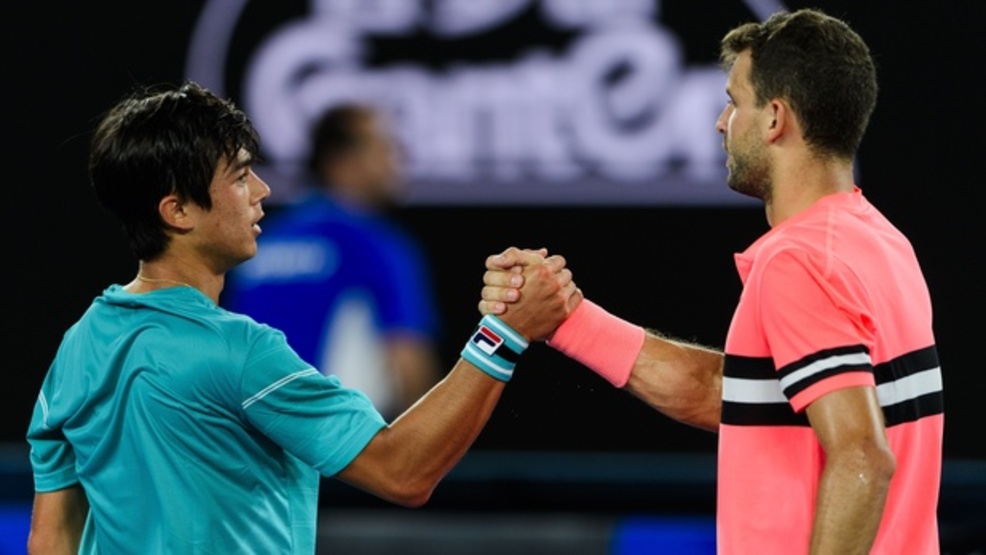 Joel Drucker: On a Triumphant Night, Dimitrov Edges No. 186 Mcdonald, 8-6 in Fifth

MELBOURNE—Unforgettable—for different reasons. That single word is how third-seeded Grigor Dimitrov and Mackenzie McDonald, an American qualifier ranked 186th in the world, will each remember their second-round match at the 2018 Australian Open. Over the course of three hours and 25 minutes, ending 20 minutes short of midnight, Dimitrov won by the bizarre score of 4-6, 6-2, 6-4, 0-6, 8-6. In his post-match courtside interview, Dimitrov called it “winning when you’re not supposed to.”

It was a perfect Australian summer evening, akin to a night at the ballpark in the U.S. when it’s warm enough to wear shorts, with a hint of a breeze to keep cool. The 15,000 seats inside Rod Laver Arena were just about all filled. Nary a soul had left by the time the Dimitrov-McDonald match had improbably entered the fifth set. Frequent cries of Aussie-flavored “Macca” rung through the arena, the crowd keen for a rugged tumble and, with trademark generosity, disposed to cheer on an underdog.

“I was soaking it all in,” said McDonald.

Only two days earlier, McDonald had earned his first tour-level win, a four-set victory over another qualifier, Elias Ymer. A semifinalist in the Australian Open juniors five years ago, McDonald won the NCAA singles and doubles titles in 2016 as a collegiate junior at UCLA. He turned pro shortly after.

In the interest of disclosure, McDonald and I played once, when he was 11 years old. handily dispatched my bag of 4.5-level chips and dips, 6-1, 6-3. Far more significantly, he’d spent many years of his adolescence working with former pro Wayne Ferreira, and has also practiced extensively with Roger Federer.

“I’ve put myself in a lot of opportunities,” McDonald said of his tennis education. Immediately after the match, Hall of Famer Mats Wilander said, “You can tell from seeing him play that he has a good head on his shoulders.”

While Wilander projected that McDonald would go further, Dimitrov kept wishing he would go away, especially after the Bulgarian took a 54-minute third set to go up two sets to one. This was the moment when the greats turn on the flames and kick the intruders back across the moat.

Instead, rather oddly, Dimitrov began the fourth set with exquisite flatness. Soon enough, McDonald was off to the races, dropping just nine points to earn the bagel in 22 minutes, a set Dimitrov dubbed “a disgrace.”

In theory, McDonald was out to earn a delicious outcome, the win of his life. But in reality, what impressed most throughout this match was McDonald’s tenacious engagement in process. Point to point, he remained focused and composed. Given the occasion, it would have been easy for McDonald to become excessively theatrical. But save for a few fist pumps and one massive wave to the crowd, McDonald was less actor in pursuit of a glitzy award and more the problem-solver, whittling his way through one moment after another. A California player to his bones, McDonald likes to strike the ball early and flat, a viable gestalt for this venue’s fast courts. Repeatedly, he dictated the action, not just by flinging back Dimitrov’s drives but with sharp, crisp, coordinated movements of feet and racquet.

Perhaps the best thing for Dimitrov was that he served first to start the fifth set. Through that final set, Dimitrov popped in 74 percent of his first serves, winning 90 percent of those points. And yet, even then, McDonald scarcely buckled.

“I just knew I had to hang with him,” said Dimitrov.

To his credit, he did so just well enough. With McDonald serving at 6-7, Dimitrov his groundstrokes just big enough to go up love-30 and in time, close the door on his first match point:

Dimitrov had earned the victory, but was well aware that he was far from the form a third seed expected to show at a major.

“I won with what I had,” he said. “That's the beauty of tennis, you always get another day, you survive to another day. Every day is different. That's I think one of the hardest things, to keep that fine line throughout the days.”

Having pushed an elite player to the brink, McDonald had won in another way. The young American would soon get on a plane to compete at a Challenger event in Newport Beach, California. Dimitrov would return to his Melbourne hotel, resurface hours later at the tournament for a practice session and recharge himself for Friday’s third-round match versus the youngster who’d taken him out at last year’s US Open, 30th-seeded Andrey Rublev.

So if you take a holistic view of tennis—and why not, given McDonald’s roots in that seeker’s mecca, the San Francisco Bay Area?—a question hung in the air: what defines winning? For on this memorable night, there appeared to be two victors.