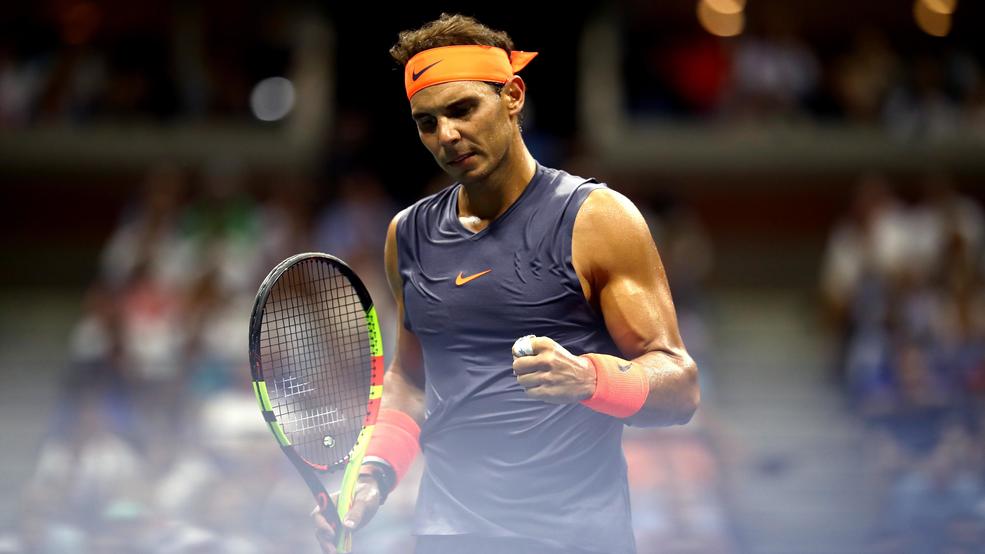 NEW YORK, NY - SEPTEMBER 04: Rafael Nadal of Spain reacts during the men's singles quarter-final match against Dominic Thiem of Austria on Day Nine of the 2018 US Open at the USTA Billie Jean King National Tennis Center on September 4, 2018 in the Flushing neighborhood of the Queens borough of New York City. (Photo by Julian Finney/Getty Images)

Joel Drucker: Rafael Nadal Survives Fifth-Set Tiebreak over Thiem at the US Open

The 25-year-old Thiem has had his nose inside the Top 10 for the last couple of years. Good news for Thiem had come this June. At Roland Garros, he’d reached the first Grand Slam singles final of his career. The bad news was that the opponent had been Nadal, who’d won that match handily, 6-4, 6-3, 6-2. That win upped Nadal’s career head-to-head record versus Thiem to 7-3. Somehow, all ten of those matches had been played on clay.

But from the start of tonight’s match, it was clear Thiem bore no scar tissue from the loss in Paris. It’s not easy to exceed Nadal’s focus, but that’s exactly what Thiem did as the first set began. Within 16 minutes, Thiem had broken Nadal twice and then closed out the fourth game with three aces. It was staggering to see Nadal so rattled. Thiem flung himself into everything from his rolling backhand to topspin forehand. In 24 savage minutes, Thiem had bageled Nadal, surrendering a scant seven points while notching 13 winners and committing only two unforced errors.

It was hard to believe Thiem could keep this up against anyone, much less versus Nadal. Sure enough, with Thiem serving at 3-4 in the second set, he began to feel the invariable Nadal squeeze. Yet once up 5-3, Nadal was unable to close out the set. Thiem broke him back, but, serving at 4-5, 15-30, was wide on two consecutive forehands. Seven minutes past an hour, the match had been leveled.

The first two sets had been but prologue, an opener for what soon became not merely a show of strokes and contrasting styles, but a fantastic brawl, the combatants separated only by a net and the presence of each player’s racquet. Thiem frequently stood closer to the baseline than usual, looking to take away Nadal’s response time by hitting the ball both earlier and harder. Rare is the player who can do this for long, so as the third set got underway, it was easy to think that Thiem had pushed hard but would eventually whither.

No way. Thiem’s backhand can generate significant depth, pace, angles and even the occasional drop shot. It’s an awe-inspiring shot. But it’s the forehand that greatly enhances Thiem’s arsenal.

Up against someone so relentlessly forceful, Nadal knew that he too would have to take the attack to Thiem, that terms like defense and offense were subordinate to relentless attention. Throughout the third set, Nadal looked to drive big forehands and backhands down the line and intermittently sneak into the net. But with Nadal serving at 3-all, 40-15, it was Thiem who wrestled the game way, closing out the break with a snappy forehand return winner.

Serving for the set at 5-4, well aware that nothing in tennis is harder than closing out a set versus Nadal, Thiem played with uncertainty. Strike or stay? Aim where? The first point saw Nadal end a ten-ball rally with a forehand down-the-line winner. That set the tone; Thiem double-faulted at 15-all, then drove a backhand long at 30-40.

Two games later, Thiem serving at 5-6, the Austrian reached 40-15. Again, Nadal was exceptionally stingy, both with consistency and aggression. Two backhand down-the-line winners helped him reach set point. Thiem fought it off with a superb down-the-line backhand of his own. On the 14th point of the game, though, Nadal laced another big forehand to take a two sets to one lead.

The quality remained first-rate, the physical and mental fitness of each player surfacing repeatedly. With Thiem serving at 5-6, 30-30, Nadal opened up the court brilliantly with an inside-out forehand that Thiem could only slice back. The Spaniard dashed forward, poised to clip a forehand volley and reach match point. But the volley went into the net.

Serena Williams wins, Sloane Stephens falls on Tuesday at the US Open:

Soon came a tiebreaker. Thiem here was relentless, quickly going up 3-0, then, courtesy of a netted Nadal forehand, closing it out 7-4. Ten minutes shy of 1:00 a.m., the two were headed into classic US Open territory.

Though there was a slight decline in quality in the fifth, swiftly enough, it resumed the prior pitch. At 5-all, well past the four-hour mark, Thiem fought back from love-40. The angular sharpness of his game was repeatedly concussive and impressive. The crowd, gathered closer to the court at this late stage, was on its feet. One game away from elimination, Nadal held at love, greatly aided by a trio of missed service returns, to level it all at six games apiece.

Twice in that final tiebreaker, Thiem fought back from a mini-break down. With Nadal serving at 3-2, the Spaniard went with the textbook lefty play of a wide serve and an attempted serve and volley. Thiem read it perfectly, striking a backhand return crosscourt that forced a Nadal half-volley. Dashing in quickly, Thiem carved a crosscourt slice backhand winner.

Nadal served at 4-5. The Austrian netted a forehand return. At 5-5, Nadal made his way to net and pounded an overhead. But Thiem flung it back at Nadal’s feet–not that hard a shot to field, but certainly difficult under the circumstances. With supreme poise, Nadal laced it down-the-line for a winner.

On the first match point, Thiem struck a superb approach shot. All Nadal could do was scamper into his backhand and throw up a moderately high lob, the kind of shot Thiem could often handle proficiently in practice. But now, past 2:00 a.m., Thiem was late to the ball and fired his smash well past the baseline.

For all the passion and poise Thiem had shown all evening, it was not enough to overtake Nadal. Join the club, Dominic. It’s a tough one to join – but you’ve got to be pretty darn good to enter it.