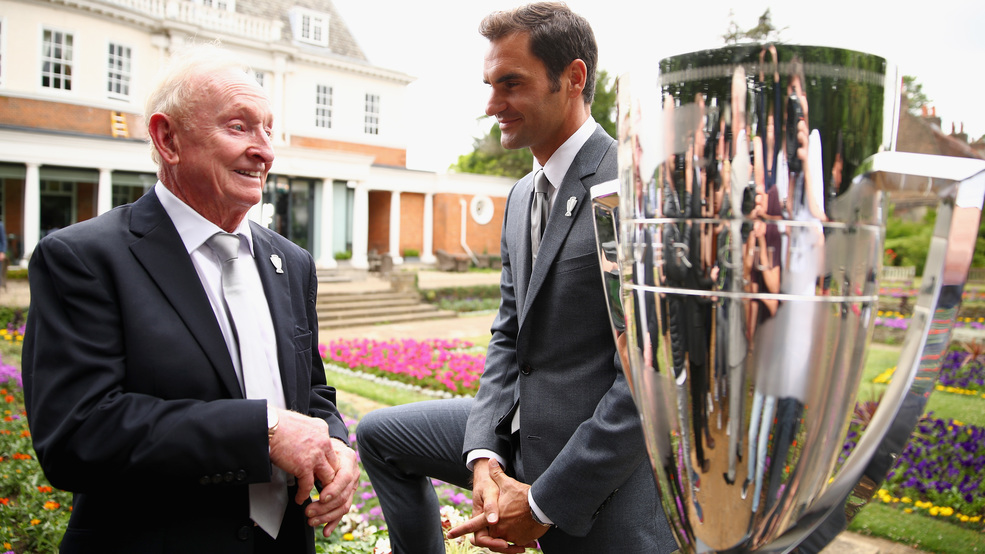 WIMBLEDON, ENGLAND - JUNE 29: Rod Laver and Roger Federer talk together at the unveiling of the Laver Cup trophy at Cannizaro House on June 29, 2017 in Wimbledon, England. (Photo by Clive Brunskill/Getty Images)

Joel Drucker: Talk of the GOAT Gets My Goat

Of course Roger Federer is great. But the greatest of all-time? That’s not even the right question. The “GOAT” concept has long bored and irked me, largely because it lacks nuance and scarcely raises anyone’s consciousness about the game’s history.

My annoyance crystallizes when this question is asked: How would Federer do versus Rod Laver? The case for Federer is often made via the concept of progress – the economic reality that competition increases quality over time. Airplanes, computers, ovens and automobiles are better than they once were. Surely this also applies to tennis players, who of course hit the ball harder and move faster than they once did.

Laver’s advocates will wonder what would happen if he was given today’s equipment and training technology, or how Federer would play with a wood racquet. The inequity here is that while assets are given to Laver, they are taken away from Federer. Hardly fair.

Then there is the matter of numeric achievement. Federer by now has won far more Grand Slam singles titles than any man ever. The Laver camp will note that the great Australian was denied the chance to play any majors from 1963-’67. Had Laver been able to compete in those 20, the argument goes, surely he would have won, say, at least seven, bringing his total to 18.

But so much of this can break apart. How good are Federer’s rivals? Or is he truly that dominant? Or has he benefitted from such factors as the homogenization of the surfaces and there being 32 seeds at all the majors? And he remains 14-23 versus Rafael Nadal. As for Laver, his ’62 and ’69 calendar Slams make it easy to bracket and vocalize his genius. But it should be noted that Laver won six of his Slam singles titles as an amateur – and in the early ‘60s was surely not as good as such touring pros as Lew Hoad, Ken Rosewall and Pancho Gonzalez. What about their Slam tallies? On and on it goes, advocates for various players speaking more like lawyers than students, as if any kind of argument could truly be solved. This to me is often little more than aimless conjecture.

What interests me more is to learn about what made a player great in his own silo of competition. Years from now, it will be interesting to talk to the likes of Nadal, Novak Djokovic, Andy Murray and many others about the experience of playing Federer – his ball, his movement, how playing him changed over the years. With Laver, for example, I can’t get enough of hearing his mates talk about such things as the struggles he had versus left-handers, the contrast of playing Laver versus Rosewall, the kind of shots Laver would hit under pressure, how he improved his serve. This to me is far more interesting than an inter-generational challenge match.

My other approach when assessing all-time greats is triage. At the top, what I’ll call the A+ list, are such titans as Federer, Laver, Pete Sampras, Rafael Nadal. Each of these four has demonstrated significant excellence over long periods of time. Next comes the A list, comprised of a series of champions who also generated superb results – but, alas, did so with metrics and criteria that varied over time. Bill Tilden won 10 majors, but skipped Wimbledon five times and wasn’t allowed to play the French Championships until late in his career (it was only open to non-French players in 1925). Bjorn Borg and Jimmy Connors competed in an era when scarcely anyone played the Australian Open and even Roland Garros was marginalized due to the presence of World Team Tennis. Jack Kramer’s progress was hindered by World War II and, soon enough, he turned pro and was unable to compete at the Slams. On and on it goes.

But with all these players – and many more – I’m hardly interested in ouput; that is, comparing results conjecturing how they would fare versus one another. Often I find this dialogue fueled more by nostalgia than history, propelled in large part by this concept: The golden age of sports ends when the athletes start getting younger than us. Kramer went to his grave thinking the most amazing player ever was his mentor, Ellsworth Vines. Laver worships Hoad, older than Laver by four years. Ditto for McEnroe with Laver.

What engages more is input: What was it like to play a certain player? How did his ball feel? What truly was his strength? How did you win points versus him? What made him perform well (or poorly) under pressure? How did he improve? What kind of opponents gave him surprising challenges? It’s fun to ask questions that truly have answers.

Talk of the GOAT also annoys me because it ignores the greatness of the entire field of players – the many rivals who comprise the competitive circuit and, in large part, provide the challenges a player must overcome.