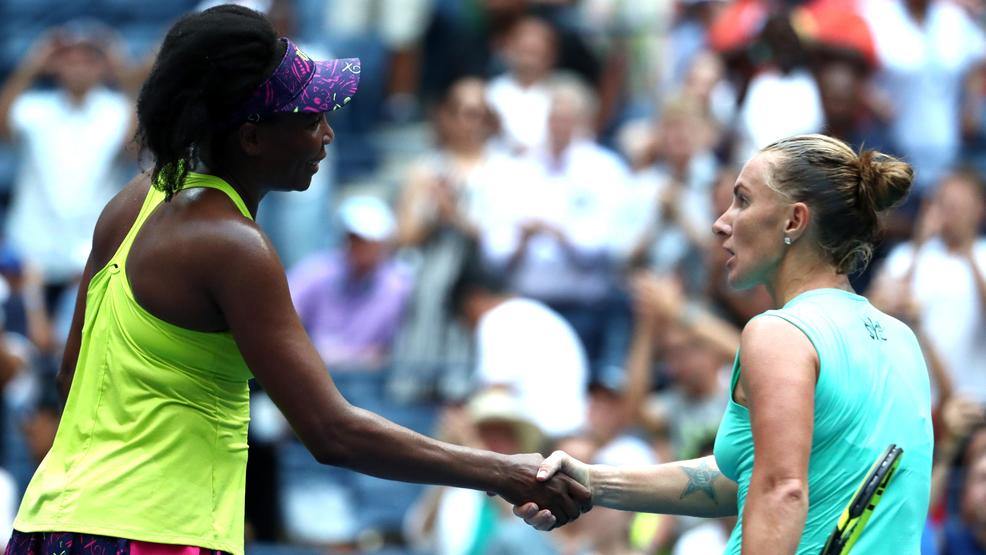 NEW YORK—She was well into her 30s now, a savvy but still powerful and aggressive veteran who’d won the US Open, taken a title earlier this summer and appeared fit enough for a fine New York run. On most days, that kind of track record would have put the Arthur Ashe Stadium crowd solidly in her corner.

Not today for Svetlana Kuznetsova. Not today for this 33-year-old Russian who had taken this title as a 19-year-old back in 2004. Not today versus Venus Williams, an opponent who not only equaled, but at age 38 even exceeded Kuznetsova’s resilient brand of longevity.

Five minutes short of three hours, amid conditions so hot that the WTA heat rule was in effect, on her fifth match point, Williams had earned a 6-3, 5-7, 6-3 victory. Like many a Williams win, it was a tribute to her distinct blend of grit, movement and shotmaking. These are the factors that through all her ups and downs, through tough matches and health challenges, will make Williams go down in history as one of the greatest competitors of her era.

Mutual tenacity had also collided with ceaseless streakiness, flavored by 14 service breaks, 88 winners, 83 unforced errors. In the second set, Williams led 4-1 and later held a pair of match points with Kuznetsova serving at 3-5, 15-40. Those were erased by a Kuznetsova wide-slice ace and an errant Williams forehand. Soon enough, Kuznetsova had won 13 of 15 points and, in time, a Williams double fault—her fifth of that set—leveled the match.

The heat rule goes into effect heat at the US Open for women’s singles matches scheduled before 4:00 p.m. when the temperature exceeds 86.2 degrees. Should the players split sets, either can request a 10-minute break and leave the court.

This had the inevitable dual effect. Kuznetsova cooled down; Williams was refreshed. Returning to the court, Williams rapidly took a two-break lead to go up 3-0.

Were you a Kuznetsova fan, you would bang your head into a wall. So often she is able to utterly command the court—especially when she is losing. And then, inexplicably, come the errors, balls sprayed wide and long, service returns gone errant, court position abdicated. As the third set got underway, Kuznetsova revealed minimal momentum.

Ten times these two had previously played, each winning five. But only twice had they met at a major, Williams winning both times (the last at Wimbledon 11 years ago). They’d never played in New York.

To a great degree, the crowd itself made a major difference. While this stadium upon opening in 1997 was named for Arthur Ashe, it was arguably christened by Williams. Recall how back in that first year, in her US Open debut, the 17-year-old American had reached the singles final. There followed back-to-back title runs in ’00 and ’01, many a compelling tussle versus the likes of sister Serena and, as recently as last year, a sparkling three-set semi versus eventual champion Sloane Stephens that Williams had lost, 7-5 in the third. Meanwhile, Kuznetsova since her title run had only once gone past the quarters, a runner-up effort in 2007.

So if Venus could claim a certain ownership stake in Ashe Stadium, to this heavily American crowd, Kuznetsova was little more than a short-term renter. Fittingly, Kuznetsova’s winners were greeted with mild applause, Williams’ with vocal cheers, increasingly so as the third set wore on.

Still, serving at 4-1 in the third, Williams dropped the next two games. Serving at 4-3, she went down 15-30—and responded brilliantly with a scorching backhand down-the-line winner and a superb 102-M.P.H. serve down the T that set up a forehand placement. Kuznetsova then struck a backhand long and was once again down to her last chance, rapidly going down 0-40. But only at 30-40 was she at last beaten, Williams whistling a crisp inside-out forehand winner.

More than 20 years after her New York run had commenced, Venus Williams once again thrilled a crowd inside Arthur Ashe Stadium.