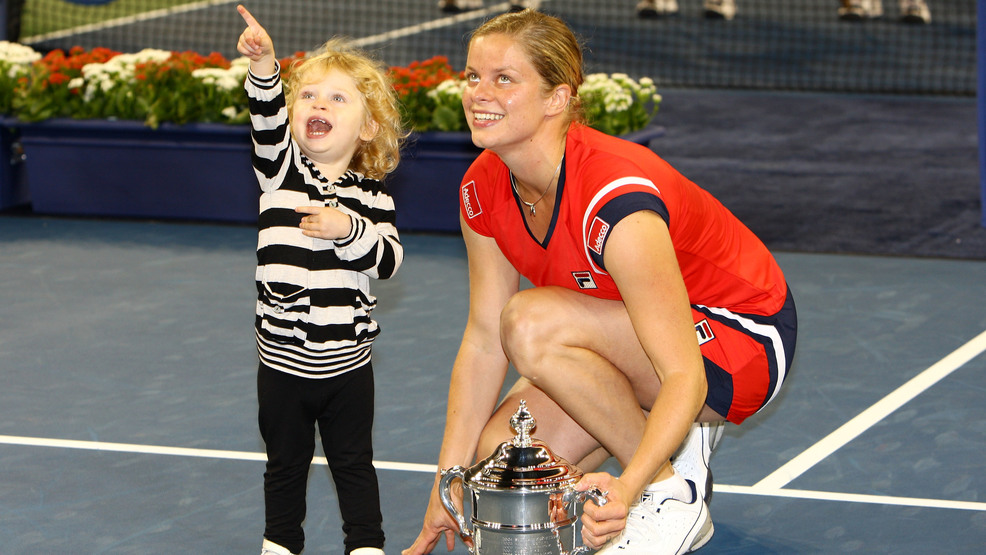 NEW YORK - SEPTEMBER 13: Kim Clijsters of Belgium and daughter Jada pose with the championship trophy after Clijsters defeated Caroline Wozniacki of Denmark in the Women?s Singles final on day fourteen of the 2009 U.S. Open at the USTA Billie Jean King National Tennis Center on September 13, 2009 in the Flushing neighborhood of the Queens borough of New York City. Clijsters defeated Wozniacki 7-5, 6-3. (Photo by Julian Finney/Getty Images)

Kim Clijsters is getting inducted into the International Tennis Hall Of Fame this weekend, which you can watch live on Tennis Channel. Here are five reasons the Belgian is one of the all-time greats:

Here are some highlights from her championship win over Mary Pierce in the 2005 US Open final:

2. She won three of her four majors as a mom. Clijsters had one major, the 2005 US Open, before becoming a mother, and won three more - the 2009 US Open, 2010 US Open and 2011 Australian Open - after having daughter Jada. She’s one of three mothers in the Open Era to win a Grand Slam title, along with Margaret Court (who also won three) and Evonne Goolagong (who won two).

Check out highlights of her absolutely magical first Grand Slam title as a mom at the Open in ’09:

4. She’s one of only two players to go through both Williams sisters to win a major. Four players have beaten them both at a major - Martina Hingis at the 2001 Australian Open, Justine Henin at the 2007 US Open, Clijsters at the 2009 US Open, Karolina Pliskova at the 2016 US Open. But only Henin and Clijsters went on to win those majors - Hingis and Pliskova lost in the finals.

5. She retired at the 2012 US Open. After a first round win over Vicky Duval, Clijsters’ last match was a loss against another up-and-comer, Laura Robson, in the second round of the 2012 US Open.

Check out highlights from the former World No.1’s final match - a razor-thin loss in two tie-breaks: