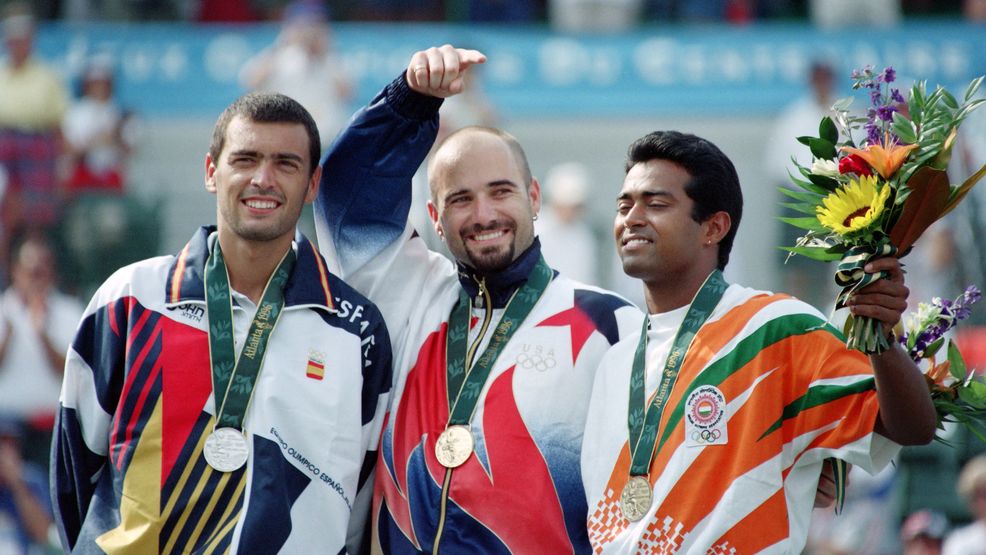 ATLANTA, GA, USA - Thursday is a special day in tennis history, as exactly 21 years ago - on August 3, 1996 - Andre Agassi defeated Sergi Bruguera to win the gold medal at the Atlanta Olympics.

At that point, Agassi had already won three of the four majors - Wimbledon in 1992, the US Open in 1994 and the Australian Open in 1995 - so a victory at the Olympics would give him four of the five pieces of a Career Golden Slam, which only one player, his future wife Steffi Graf, had ever done.

And though he had his home crowd cheering him on, he didn’t breeze through the draw at all - he was pushed to three sets twice en route to the final, rallying to beat Andrea Gaudenzi in the third round, 2-6 6-4 6-2, and edging Wayne Ferreira in the quarters, 7-5 4-6 7-5. But he made it through to the gold medal match anyway and absolutely powered past Bruguera in straight sets, 6-2 6-3 6-1.

“To me, this is the greatest thing I’ve accomplished in this sport,” Agassi beamed afterwards.

Here’s the story of Agassi’s up-and-down 1996 season going into the final of the Atlanta Olympics:

And here are highlights from Agassi’s triumph over two-time French Open champion Bruguera:

Three years later, in 1999, Agassi would capture the French Open, becoming the first man in tennis history to complete a Career Golden Slam. Now, Agassi and Graf are two of four players who have achieved the feat - Rafael Nadal did it in Beijing in 2008 and Serena Williams did it in London in 2012.

Agassi winning gold wasn’t the only historic event that was made on August 3, 1996 - on the same day, one of the greatest songs of all time hit No.1 in the US. Yes, you guessed it: The Macarena.