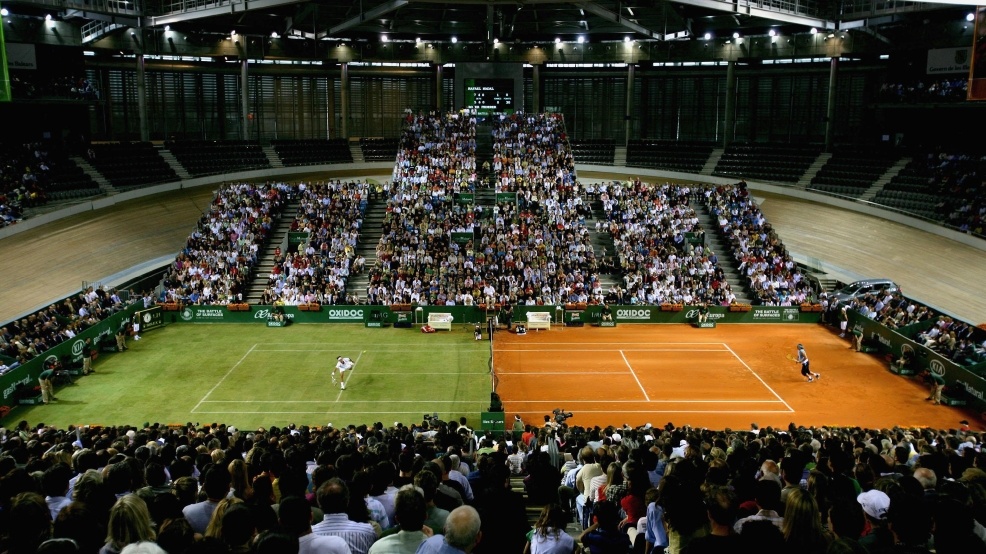 MALLORCA, SPAIN - MAY 2: Rafael Nadal of Spain in action with Roger Federer of Switzerland during the The Battle of the Surfaces between Rafael Nadal and Roger Federer at The Palma Arena on May 2, 2007 in Mallorca, Spain. (Photo by Clive Brunskill/Getty Images) *** Local Caption *** Rafael Nadal;Roger Federer

Federer And Nadal Played On This Crazy Court 10 Years Ago

PALMA DE MALLORCA, Spain - Roger Federer and Rafael Nadal have played each other 37 times on the ATP World Tour, including in nine Grand Slam finals, but one of their most unique encounters may have been an exhibition - the “Battle of Surfaces” - which took place 10 years ago to this day.

For 19 days and at the cost of 1.63 million dollars a special half-clay, half-grass court was built in Palma de Mallorca, on Nadal’s home island of Mallorca, to theoretically even the odds between then-king of clay Nadal and then-king of grass Federer (Nadal had won the last two French Opens and Federer had won the last four Wimbledons - and they would both repeat at those events in 2007).

“The idea appeals to me as we both dominate one of the surfaces,” Federer said before the match. “It’ll be fun to find out what it’s like to play on a court with mixed surfaces and it ought to be interesting to see who chooses the better tactic. People have been talking about this event for quite a while.

“Rafa has been to Basel, after all, and now I’ve got the opportunity to play at his place for once.”

Check out highlights from the Battle Of Surfaces here:

“It was a long match with many changes of pace and with little time to adapt,” he said.

“My feet are suffering as a price of having to adapt to the grass!”

Federer and Nadal were dominating the tour a decade ago, and they’re doing it again in 2017, sweeping all of the biggest titles - Federer has won the Australian Open, Indian Wells and Miami, while Nadal won the only other event at the Masters 1000 level or higher in Monte Carlo a week ago.