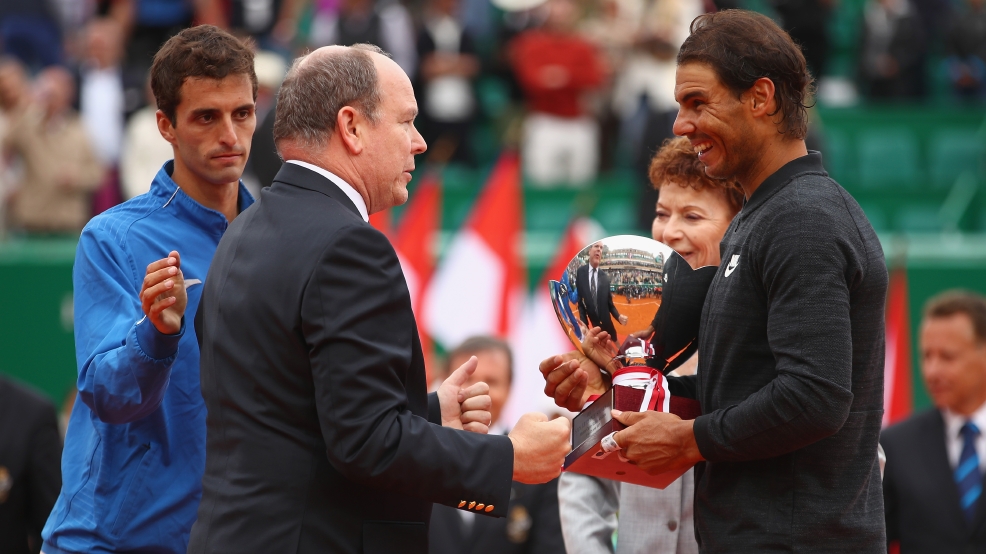 MONTE-CARLO, MONACO - APRIL 23: Rafael Nadal of Spain talks to Prince Albert ll of Monaco after his straight set victory against Albert Ramos-Vinolas of Spain in the final on day eight of the Monte Carlo Rolex Masters at Monte-Carlo Sporting Club on April 23, 2017 in Monte-Carlo, Monaco. (Photo by Clive Brunskill/Getty Images)

Here’s Everything Rafael Nadal Did By Winning Monte Carlo

MONTE CARLO, Monaco - Rafael Nadal needed just 76 minutes to defeat fellow Spaniard and fellow lefty Albert Ramos-Vinolas in the final of the Monte-Carlo Rolex Masters on Sunday, 6-1 6-3. It was somewhat of a routine final, but by winning it, Nadal unlocked a whole bunch of milestones.

Here are seven things the former World No.1 achieved by winning Monte Carlo on Sunday:

He won his first ATP World Tour title in almost a year. It had been exactly a day short of a year since Nadal won his last title - he won Barcelona on April 24, 2016, and this title on April 23, 2017.

He’s now won at least one title every year for the last 14 years. Nadal won his first ATP World Tour title at Sopot back in 2004 and hasn’t gone a single year since then without winning a title. His highest total for a single year came the next year in 2005 when he won a whopping 11 titles.

All of the milestones weren’t lost on Nadal: “I feel lucky to keep playing tennis and being healthy all these years,” the Spaniard said after the final. “For me, this is a very important day in my career.”

Here are some highlights from Nadal’s championship victory over Ramos-Vinolas in Monte Carlo: