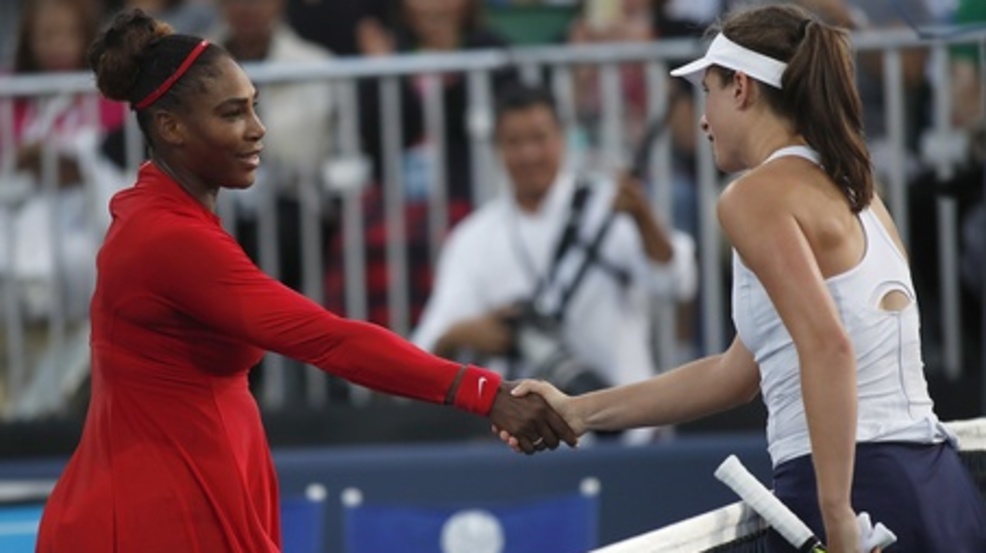 Serena Williams was the runner-up at Wimbledon, but she didn't look quite the same in San Jose. (AP)

In her first match since reaching the 30th Grand Slam final of her career—and first as a mom—at Wimbledon, Serena Williams was knocked out in the first round of the Mubadala Silicon Valley Classic on Tuesday night, winning just one game in a 51-minute, 6-1 6-0 loss to Johanna Konta.

Things started off normally with Serena holding serve comfortably, but from there it was all Konta, who reeled off the next 12 games—she almost won twice as many points in the match, too (53 to 27).

“I think she played well in the second set,” Serena said in her post-match press conference. “I think I wasn’t sharp at all in the first set and then I think she got confident, and she clearly ran away with it.”

Serena had won their only previous meeting, 6-2 6-3, in the 2017 Australian Open quarterfinals.

“I think she played better in this match than she did 18 months ago, so that’s a good thing for her,” Serena said. “I know I can play a zillion times better, so that kind of helps out too. I don’t know. I have so many things on my mind that I don’t have time to be shocked about a loss where I clearly wasn’t at my best. I can only try to be there. When I was out there I was fighting—I wasn’t just giving it away.

“I’m just trying to take the positives out of it.”

The 23-time Grand Slam champion and former world No.1 was also asked whether she’d stay in town to support her sister, Venus, who will play her first match of the tournament on Thursday night.

“Yeah, maybe. I don’t have anything else to do except for train, so yeah, I’ll probably come out.”

Serena had won this tournament the last three times she’d played it in 2011, 2012 and 2014, but this is the tournament’s first year being held in San Jose (it just moved from Stanford this year).

Barring retirements, this loss was the most lopsided loss of Serena’s career in terms of games won.

For Konta, it could be a turning point—since reaching the semifinals of Wimbledon last year and hitting a career-high of No. 4 in the world right after, the Brit has struggled, not just falling out of the Top 10 but nearly out of the Top 50 (she’s currently No. 48). This has been a good tournament for her in the past, though—she won it the only time she played it before in 2016 (beating Venus in the final).