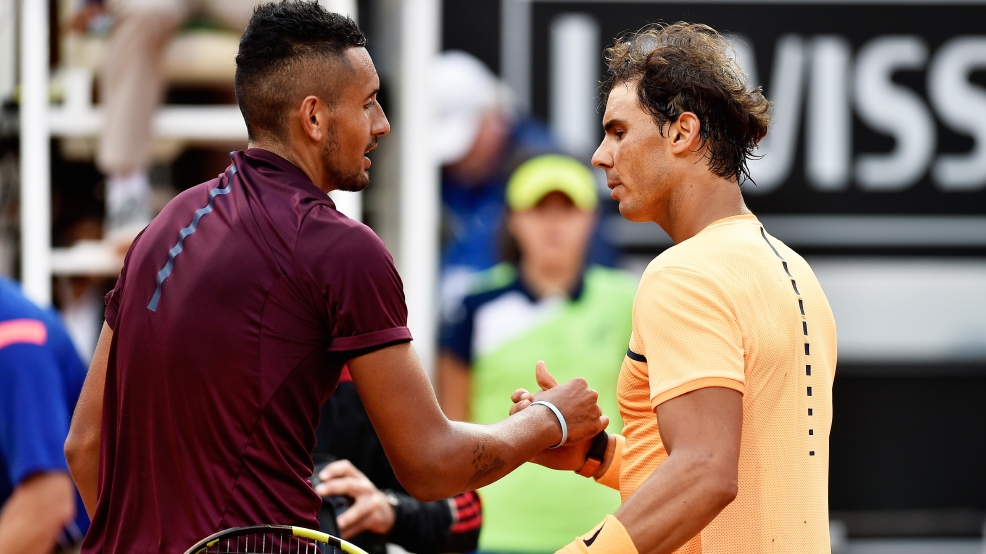 ROME, ITALY - MAY 12: Nick Kyrgios of Australia and Rafael Nadal of Spain shake hands after their match on Day Five of The Internazionali BNL d'Italia on May 12, 2016 in Rome, Italy. (Photo by Dennis Grombkowski/Getty Images)

There have already been a lot of blockbuster match-ups at the Mutua Madrid Open this week, and we’ve got another one coming up Thursday night - Rafael Nadal, one of the most decorated players in tennis history, against Nick Kyrgios, one of the biggest up-and-coming talents in the sport.

Here are 10 Things To Know about Nadal and Kyrgios’ third round clash at the Masters 1000 event.

3. But he was pushed to the limits in that last match. Nadal needed just under three hours - two hours and 57 minutes to be exact - to squeak past longtime rival Fabio Fognini, 7-6(3) 3-6 6-4. “Even though I played really badly, my attitude has been very positive,” a relieved Nadal said afterwards.

4. Meanwhile, Kyrgios hasn’t lost a set this week. Kyrgios didn’t get a first round bye like Nadal and has played two matches to get here, and he’s won both in straight sets - starting with a 7-6(1) 6-4 first round win over Marcos Baghdatis, and then a 6-3 6-3 second round win over Ryan Harrison.

6. Nadal has won more matches than anyone this year. Nadal’s win over Fognini was his ATP-leading 30th match win of the year (he’s 30-5 overall and 30-2 against everyone other than Federer).

9. The winner of this match is guaranteed to play a Top 10 player in the quarters. The winner of Nadal and Kyrgios will face either World No.6 Milos Raonic or World No.10 David Goffin next.

10. You can watch this match live on Tennis Channel! Head to our TV Schedule page here.

And just to whet your appetite, here’s a taste of what their first two meetings were like: